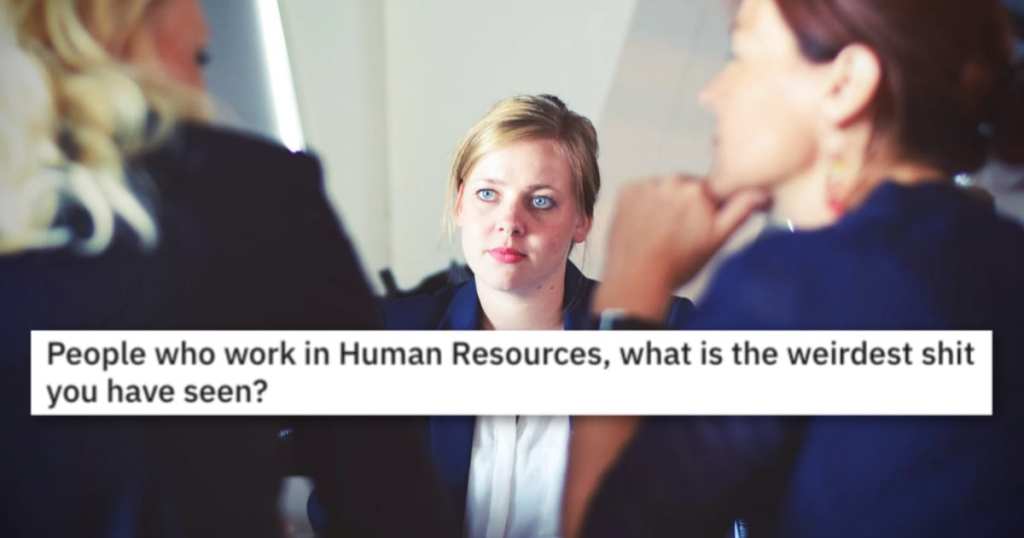 Jobs are funny things, mostly because in order to do them, most of us have to deal with other people. And other people? They’re messy and strange, and honestly, don’t really care about how their behavior might really throw someone else’s day off track.

These 16 people work in human resources, which means their jobs see more weird than most – it’s part of their duties to manage all of the weird sh*t that goes down in the office.

Which also means they’ve got some really great stories. So please, enjoy.

My dad works in HR. He just told me about a day when they had to layoff about half of the company. It was crazy and there were a whole lot of moving parts that day.

Unfortunately, in all the craziness, no one remembered to tell this one new hire that sadly the position he was hired for was no longer affordable. So he came in to the office only to see everyone clearing out their desks and leaving. And then…he got laid off. An hour into his first day.

He said the guy understood, but it was the most horrible he ever felt for someone in his life.

Not HR but a company I worked at, some employees were playing Squash or similar racket sport at a gym. One of the guys had been working there for over a year, nice guy.

At the gym someone recognised him and called the police. He was arrested shortly afterwards by armed police, for an assassination attempt on the King of Spain. He had fled the country and was using a false name.

Not HR but have been on teams to interview and have input on possible hires.

One standard question: “What would you do if your were having problems with a coworker?”

Answer’s can include: “I would try and work it out” or “I would take it to a manager” etc.

He was surprised when he didn’t get the job.

13. This is super wholesome.

One of the strangest cases was brought about because a Client asked us to review CCTV footage as he’d driven past the office late at night and noticed the motion sensor lights inside going on and off and was concerned there had been a break in.

Turned out our night security officer who’s primary role is to monitor cameras from the control room was skipping up and down the corridors cause “he felt too full of energy” and had to get it out of his system somehow.

12. Sounds like a really terrible excuse for a human.

Obscuring a few details here, you’ll understand why in a second.

There was a mid level supervisor at a state agency i NEVER got along with. Guy was nasty, argumentative, real piece of work, but still had a decent amount of people loyal to him.

I come in one day and he’s not there, everyone was distraught. Turns out Law Enforcement had come after the guy- caught him red handed trafficking child pornography.

Rather than arrest him immediately, they gave him the option to return home, settle his affairs, maybe call his lawyer. He took the opportunity to simply hang himself in his own garage instead.

The next couple of weeks was just damage control among the staff when the details came out. Horrible situation all around.

11. They tried to pull the ol’ George Constanza approach.

Got a call from our office in India that staff who supported the night shift were running a brothel from the office. They didn’t know they couldn’t do that.

Still fired. They tried to appeal the decision. Did not work.

10. Things like that are very rarely as funny as they first appear.

It may sound humorous, but there was significant mental issues at the heart of this.

9. That’s quite a reasonable request.

Worked for a large trucking company. Every employee would get a present on their birthday (in the mail) and their names on the video board (this weeks birthdays are:).

A guy called to ask if his name could not be on the board. Reason : his twin brother murdered his parents and he did not want to be reminded of his birthday

8. This one just makes me sad.

The guy had IBD and the manager knew this, so the video show him running down the hall and literally a few feet from the restrooms… he starts sh**ting himself and you see it coming down his leg pant. He looked to be in pain cause he kinda collapsed, and then got back up.

People were baffled when they saw this live lol Manager = Fired, so definitely the weirdest s**t I’ve ever seen, literally.

7. Why would you keep that at work?

Caught a site manager with like 50+ pairs of panties hidden all over his office in Ziploc bags, a multitude of s*x toys, and over 100k in cash stuffed in ceiling tiles. Took awhile to unravel all of that.

6. I would have loved to have sat in on that.

I once had a temp job in HR.

I was scanning lots of old personnel files, and the one perk of the job was reading old complaints against people.

The best one I came across was a mediation caused by one member of staff accusing another of witchcraft.

5. I’m sure they felt like that was a reasonable request.

I no longer work in HR or at this company, but it’s my favorite story from my time there.

Our benefits team made the decision to eliminate reserved parking as lots of employees were frustrated when they walked past dozens of empty spots in the reserved lots every day. This new policy applied to all of the company’s locations.

Of course, the benefits manager received hundreds of complaints in the first few days from people insisting they needed an exception for their own personal spot. The best reason by far was from one person who “needed a spot close to the door because they were terrified of bobcats”. No other context. We didn’t have bobcats near the corporate office so at first we thought they meant construction equipment? Turns out there actually were sightings of bobcats, like the animal, near this person’s location.

Last I heard they were told to arrive earlier to get a closer spot and didn’t get an exception.

4. They say you get used to that sort of thing, but…

I’ve shared this story before, but…

An employee (from a different country and culture) never showered. He said that whee ehe comes from, they shower about once a month. His coworkers complained of the smell, which was gaggingly offensive. His supervisor eventually sent him home and told him he couldn’t come back until he showered.

It was a union business and the guy filed a grievance with the union steward. They came into my office, which has a camera because it was where we had all major disciplinary meetings.

The moment they walked into my office, I almost gagged from the smell. It was suffocating. I had two chairs in front of my desk and I asked them to take a seat while I went and pulled his file. When I left, I pulled the door closed behind me.

I went to my boss’s office, told him the situation and asked him to pull up the camera in my office. It was hilarious.

The Union steward was holding his shirt over his nose and telling the guy “Goddamn dude! You’re killing me! You’ve got to take a shower!”.

After letting them marinate in the stench for about 10 minutes, I went back in and the Union steward retracted his greviance and agreed to send the guy home.

3. Some people are just not too smart.

One of the dumbest things, an employee that worked night audit at a hotel parked his car at the entrance and would occasional go out there to drink a bottle of vodka in full view of the cameras. He didn’t even sit in his car to drink! Just grabbed the bottle out of the car each time and drank in the open. Seriously, he could have put it in a water bottle and drank at the desk and would have not been caught as soon as he was. If at all!

2. What on earth is wrong with people.

I got a call from a woman I’d never spoken to, asking when she could start. She’d received a job offer after interviewing with a manager for a customer service position, she told me, but no one ever contacted her about a start date or pre-employment processes like a background check, and it had been a month.

After a lengthy investigation, it came out that this manager had fabricated a job opening and offered it to this woman in an attempt to impress her. She quit her job (but, it should be noted, did not respond to the manager’s romantic overtures) with the expectation of joining my company. She got a settlement (with an NDA) and the guy who “hired” her got fired.

There was also a guy who faked his son’s death for some extra PTO.

1. And no one blamed them one single bit.

I’m not in HR but my sister-in-law used to be one for a large Canadian tech firm.

He had rubbed his poop all over the walls of his hotel room and the hotel cleaning staff refused to deal with it.

I could 100% never do a job like this, but I’m so happy there are people who can, and who tackle it with aplomb.

If you work or have worked in HR, please share your wackiest story with us in the comments!