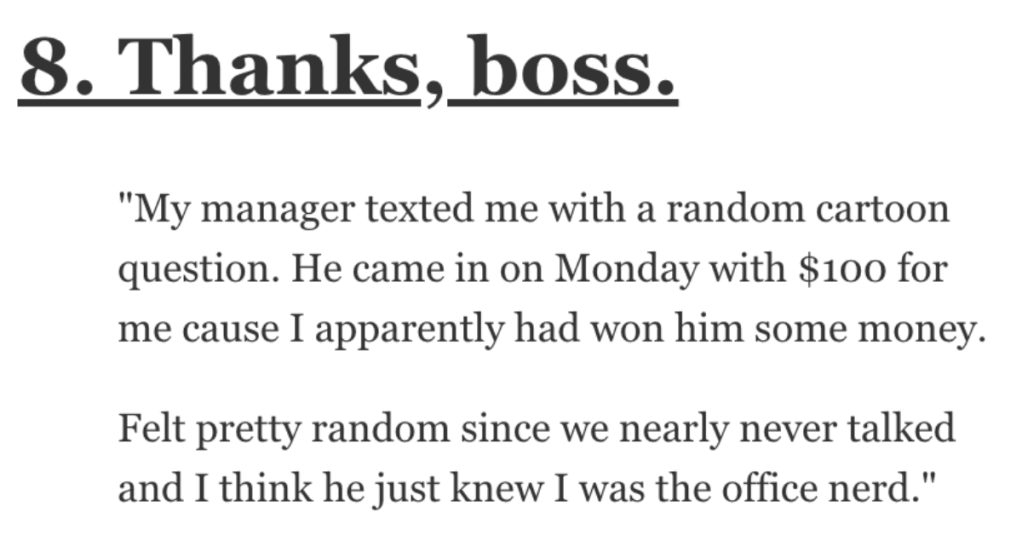 Fact: random acts of kindness are wonderful in both ways: whether you’re on the receiving end or the giving end.

And one little act like this can totally redeem your faith in humanity!

And we all need a little bit of that once in a while, don’t you think?

A lady came to the register to checkout with probably $100+ worth of stuff. It was all like… just random cuts of fabric, paint, assorted craft supplies. A LOT of stuff.

Her card got declined, and she looked really upset. Started putting it all back in the cart, trying to determine what she could pay for. The lady behind her in line just stepped forward and said “put it all back, I’ll pay for it.” Put her card in the reader and the first lady started crying, quietly thanking her.

The cynical side of me thinks it was a scam by the lady to get free s**t, as I’d definitely seen that s**t before. (Another woman a few weeks before literally said “can anyone pay for me?”)

But the good part of me believes that lady just needed a little bit of happiness in her craft supplies during a hard time. The lady who paid for it just did so with no hesitation.”

“When I was in college I was walking back to my apartment and it starting pouring rain. I was getting drenched and of course got stuck at a crosswalk.

Out of nowhere the rain stopped pouring and I looked up and saw an umbrella a girl behind me had put over me.

She went past my apartment and then walked away. No one ever had done something that nice in my life, I was just shocked.”

“It was pouring one day while I was on the way home. I got off the bus and decided to walk in the rain as I did not have an umbrella with me.

This little boy, who was on the same bus as me, walked next to me with his umbrella over us, without saying a word. Once we were out of the rain, he smiled, waved and walked off.

I thought it was cute.”

“Twenty years ago, an old man saw me struggling to find a quarter in the bottom of my purse near the gumball machines.

I had a baby on my hip and a 2 year old melting down. In one swoop, he took the baby and held out a handful of change. Little man got his gumball, grandpa got baby kisses, I took a breath.

I never carry cash but I always have change now, in case I’m ever the old woman in this scenario.”

“I work at a restaurant in Texas.

We were one of the only ones working during the winter storm. Our card machine was broke and this guy didn’t have cash to pay for his meal. This woman just came up and covered the $40 bill.

It was super nice considering everyone was going through it in Texas during this time. Also, people were extremely grateful to us for being open. We were getting like $20 tips “just because”.”

“A man I was chatting with while waiting on our cars bring fixed left the service department $100 toward my car repair and then left before I could thank him.

I paid it back by gifting a non refundable hotel room to a random stranger via the manager of the hotel.”

“During an interview for a minimum wage, fast food job, the manager asked why I didn’t have a high school diploma or GED. After explaining why I had neither, he offered me the job and to pay for me to get my GED.

If I passed, I didn’t owe him a thing. If I failed, I owed him the $50 it took for me to take the test. I passed and even won a one year academic scholarship to the community college that I went through to get my GED. While I did not excel at being a student once again, I never would have had the opportunity to learn that without that manager’s generosity.

I am forever thankful for the risk that man took on me. I would not be where I’m at without him.”

“My manager texted me with a random cartoon question.

He came in on Monday with $100 for me cause I apparently had won him some money.

Felt pretty random since we nearly never talked and I think he just knew I was the office nerd.”

“I was a frazzled new mom in the grocery store about the third time I passed this older women she said stop clenching your teeth and you’ll feel better, something in her voice just told me she really cared.

10 years later I still think of that woman and try to relax my face when I’m stressed.”

“In August of 2019, I loaded a bunch of camping gear onto my bicycle and spent the better part of the next seven months riding 5,300 miles around the US.

Along the way, everyone I met wanted to be a positive part of my story in whatever way they were able. Many incredibly kind locals opened their homes to me for a night, providing me a warm bed, a hot shower, and their wonderful company over a delicious home cooked meal. Drivers would see me stopped on the side of a desolate road and pull over to offer me an extra bottle of water when I was a million miles from the next town.

Neighbors in the next campsite over, after seeing me ride into camp on my bike with all my stuff on it, would come over to ask about my adventure. I’d give them a summary of where I’d come from and I was going, and they’d invite me to join them around their fire to exchange their food and beer for my stories. It was absolutely incredible, the unending kindness of so many people.

I could go on and on and on about those people, but I’ll share just one story. In mid January, I was cycling south along the Big Sur coastline of California. One evening, I rolled into a small campground to spend the night. After picking out my campsite and locking the bike there, I walked up to the place where you register and pay for the campsite.

There was another camper there, and he started chatting with me as we each filled out the form for our sites. When I told him I’d biked all the way to California from my home in Wisconsin, he invited me to join him for some dinner, and I was happy to accept.

Over beers and fire-roasted vegetables, I learned that Moe had driven up that way from San Diego, and the next afternoon he was heading to another nearby campground for a small music festival.

The two of us really hit it off, and he actually invited me to make myself at home in campsite for that night. I quite enjoy traveling on my own, but it does get lonely at times, so I took him up on that and pitched my tent in his campsite. The next morning, I woke up to the soft patter of rain falling on my tent

. Thankfully Moe had strung up a tarp over the picnic table, so we were able to cook and eat breakfast under its cover. By the time we finished breakfast, the light drizzle of rain had turned into a full-on downpour. My tent —which had kept me dry through many rainstorms in the preceding five months— was absolutely soaked. We packed up camp as quickly as possible and sat in Moe’s truck while I tried to figure out what I’d do that day.

Early the day before, Moe had gotten a tattoo in a nearby town, and his tattoo artist told him of this small dirt road somewhere off the Pacific Coast Highway. This road twisted its way through the rugged hills just east of the highway, and it was supposed to be a beautiful drive.

Moe suggested we check it out together, and I was all for it, so we threw my bike in the back of his truck and got on our way. We eventually found the road, and there was a big sign by the turnoff warning about the dangers of driving it when wet, that a vehicle with high ground clearance and four wheel drive was strongly recommended.

Moe’s truck had both of those things, but we still weren’t sure about it, because of the weather that day. But when we saw a tiny little sedan coming from the dirt road, we decided to go for it.

It was an absolutely beautiful, if a bit hair-raising, drive. And I think the foggy weather made it even more beautiful than it would have been on a clear day. After that little adventure, we drove to the campground of that music festival he was heading to. By that time, the rain had cleared up, so we went ahead and set up camp together.

We spent the afternoon hanging out in a little bar in the campground, where he beat me several times at chess, and I bought a ticket to that night’s music. We walked back to the campground to cook some dinner, then headed back to the bar for the music. The band that played that night was not the type of music I would normally listen, though they were still good. And the atmosphere and all the people there were super cool.

The next morning, it was another beautiful day with clear skies, so I was ready to get back on the bike. I loaded all my camping gear onto my bike and said goodbye to my new friend. The afternoon of the next day, I would actually see Moe once more. As I was cycling along that day, a driver lightly tapped their horn before passing me.

I recognized the rather unique bike on the back of his truck, and he pulled over a short ways ahead of me. We stopped to chat for a few minutes before he continued on his way back home to San Diego. He would be there that evening, but I would be a few weeks behind him!

He had given me his phone number, with the idea that when I got to the city we could get back in touch. But as I got closer to San Diego, I came to realize I had somehow accidentally deleted his number from my phone, or perhaps it didn’t get saved properly.

I was pretty disappointed to see that, but I suppose that’s the nature of friendships formed while traveling. They’re great while they last, but they never last long.”

Are there some random acts of kindness that really stick out in your mind?