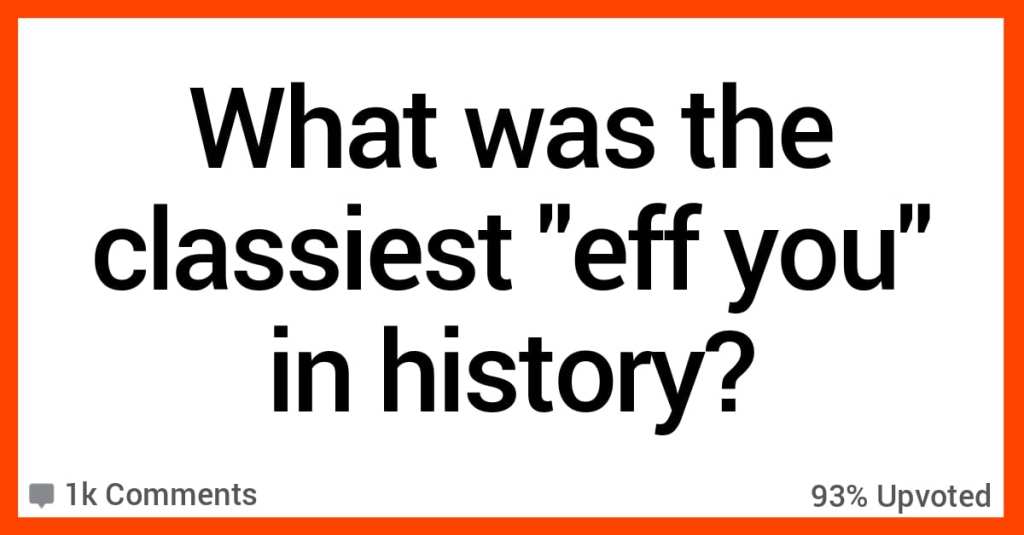 11 Times People in History Managed an Eloquent “Eff You”

There’s a saying out there that cursing shows a lack of imagination and vocabulary, and while I don’t really ascribe to it – sometimes a curse word is the best and only word that will do – there are, apparently, beautifully polite and savage ways to tell someone to go f%ck themselves.

These 11 examples from history are actually perfection.

Princess Diana’s “Revenge Dress” when Prince Charles confessed on national television that he had been unfaithful to her.

10. Churchill had the best comebacks.

“To this time [c. 1912] belongs a well-known story of Winston Churchill and Nancy Astor. It sounds like an invention but is well authenticated. He and the Astors were staying with Churchill’s cousin, the Duke of Marlborough, at Blenheim Palace.

A few that I can remember

Eli Whitney invented the cotton gin which obviously led to the south’s rise in economic power. He didn’t make a penny off of any of this though, as his invention was copies and southern courts ruled against him. He did end up becoming wealthy though, as he later went on to invent inter-changable parts which definitely played a roll in the Norths victory of the South in the civil war.

During china’s “great leap forward” they had a few, I think 4 pest control campaigns. One of them was against Sparrows. Order was to practically make Sparrows extinct because they ate planted crop seeds. Well the campaign worked a little too well, as crops began having locust infestations, and with no natural predators, the crops ended up being fucked leading to a massive famine.

Some emu’s told the Australian military to fuck off once

“And you, madam, are ugly. But in the morning, I shall be sober.”

While Picasso was living in Nazi-occupied Paris during World War II, one German officer allegedly asked him, upon seeing a photo of Guernica in his apartment, “Did you do that?”

Picasso responded, “No, you did.”

6. Jackson was many things, but dumb wasn’t one of them.

President John Quincy Adams said Democrat Major General Andrew Jackson was a “ barbarian who couldn’t write a sentence of grammar, and can hardly spell his own name”.

5. If only the white man had listened.

In 1744, the collective chiefs of the Native American nations met to discuss a letter that was sent to them by the College of William and Mary. The letter suggested that they send 12 of their men to the college so that they could learn how to read and write. The Native American chiefs sent the following reply:

“We know that you highly esteem the type of leaning found in colleges, and that the maintenance of our young men while with you would be very expensive to you. We are convinced therefore, that you meant to do us good by your proposal and we thank you hardily. However, you that are wise must know that different nations have different conceptions of things, and you will not take it amiss if our ideas about education of this kind happen to not be the same as yours. We have some experience with it, as some of our boys have been to the colleges of the northern provinces. They were instructed about all of your sciences, but when they came back to us they were bad runners, ignorant of every means of living in the woods, unable to bear either cold or hunger, did not know how to build a cabin or take a deer, kill an enemy, spoke our languages imperfectly, and therefore were neither fit to be hunters, warriors, or councilors. They were in effect, good for nothing. We are however, not the less obliged to your kind offer though we decline accepting it. To show our gratefulness, if the gentleman of Virginia will send us a dozen of their sons, we will take care of their education. We will instruct them in all that we know, and make men of them.”

4. I wonder if they’re still married…

Political rival asked his wife’s opinion about this. She “accidentally” SMS’d the entire SMS chain plus her answer of “Get it in writing, or he’ll deny he ever said that.” …. to her entire contact list. Including other MP’s, journalists, her entire social circle…..

That completely blew up Johnson’s credibility and his first attempt to become Prime Minister.

3. You don’t challenge a master.

Probably the time when someone challenged Beethoven to a contest on who was the better musician.

Sfter the challenger finished playing one of his own works, Beethoven took the sheet music, flipped it upside down, and played it that way.

“If I had any ammo left, you wouldn’t be here”

Pedro María Anaya, a Mexican General during the Mexican-American War while surrendering.

1. I need to get one of these. Excepting delivery people.

“End of the laneway, don’t come up the property.”

I really need to strive to use English better!