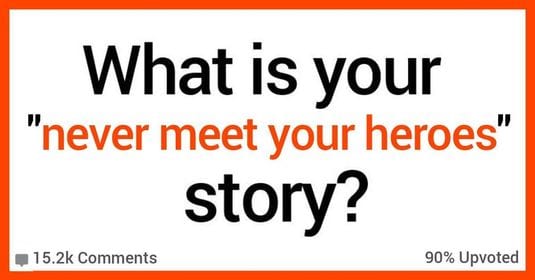 Meeting a “hero,” whether that person is a huge celebrity or just awesome in your eyes for one reason or another, is a little like playing roulette, and listen – even if you win, it might not have been worth the risk.

They say if you really look up to and admire someone you should never meet them, and based on these 14 stories, I gotta say this sounds like pretty great advice.

Went to a Comic Con and the dude who played Spike from Buffy The Vampire Slayer got absolutely slated by everyone there, including guest celebs.

He was charging his fans £20 for what was meant to be a free talk. He was the only guest there who did this and then charged £50 for autographs.

13. What a complete douchebag.

I was a huge fan of Ryan Cabrera through college. His voice is mediocre at best, and his melodies are simple but catchy. Despite this, I really identified with his lyrics when going through a really bad breakup that spun me off into destructive behavior during the second half of college. Always came back to his music and it eventually got me out.

Fast forward to 2016, and Ryan’s out on tour, I was able to see him perform live for the first time in my life and got the opportunity to meet him after the show. I had rehearsed what I was going to say about how his music kept me going through my darkest times…and he completely brushed me off to hit on my friends.

Haven’t listened to his music since.

It was in another similar thread.

When I was still in high school my best friend, his older sister and I “met” Adrian Peterson, future Hall of Fame running back for the Minnesota Vikings. And it SUCKED. We all happened to be walking into a mall in the suburbs of Minneapolis at the same time, and he was walking right in front of us.

My buddy and I got all excited, and I made eye contact with him so I knew that he knew we recognized him, but before we could say “Hey Mr. Peterson, big fans,” he held the door open for my friend’s sister, checked out her a$$ and whistled at her, then closed the door right in my friend and I’s faces. Didn’t even want to say anything to him after that. This was 6-7 years ago now and I’m still salty about it.

Back in the mid 90s my old man found a huge 2 metre python in our backyard. He called Australia Zoo and spoke to Steve Irwin on the phone (this was before he really became famous) about how to get rid of it because I was only a toddler at the time and could swallow me whole.

Apparently Steve was super excited even though it was through a phone call and went on about how the python was king of its domain and we shouldn’t disturb it. He talked my Dad into letting it be but about a week later the neighbors came home to find the python on their deck, so they ended up getting it relocated anyway.

Not sure how relevant that is but yeah that’s my Steve Irwin story.

9. If you want your tip, keep your mouth shut.

This was back in the 90s my mom was a waitress at a restaurant and the town we lived in was a frequent sight for filming movies and TV shows, and one day, my mom waited on a table and realized it was Anthony Hopkins with his agent sitting at table ordering breakfast.

After she took their drink order (silence of the lambs was still new). So in the kitchen all of her co-workers were squealing like little girls and dared my mother when taking their breakfast order if he wanted a side of fava beans and a nice chianti. But she chickened out worrying she’d bother him.

She must have done the right thing because he left a 40% tip and wrote on the check excellent food and service.

While he was in town, he ate breakfast there almost everyday, and everyone was just too chicken to be a fan girl about him lol.

He was attending a senior design presentation at my school and was basically the guest of honor and got his own little speech. I was really hype because I love space and everything surrounding it. He’s a nice guy but the sad truth is that he’s closer now to just being a senile old man.

A couple times he just kinda stopped talking and forgot where he was. One of the people he brought basically had the job of keeping him on track and had to cut him off a few times because he kept rambling off topic. Really sad to see such an impressive man reduced to that

7. I don’t understand this attitude.

I met Billy Corgan once when he had his side band Zwan.

He was a complete jerk to everyone and acted like he didn’t want to be there (HIS show.)

It forever changed my perception of him.

My wife went to a Pumpkins reunion show years ago.

She said the show was solid but Corgan made the whole crowd roll their eyes when he actually thanked himself at the end of the show.

I’m not sure how many of you guys are Australians but I met Ben Cousins a couple of years ago while out in Northbridge and the dude was meth-d out of his mind.

Felt so bad to see the bloke in that state, especially with all the hope we all had as his career was finishing up.

When I was in 2nd grade, I thought Bob Feller (pitcher from the Indians back in the day) was the greatest thing ever. I read about him constantly. When Cleveland opened it’s new Jacob’s Field stadium, he was there signing autographs all day. I went to the exhibition game with my dad.

Around 10pm we were walking to our car in the lot, and my dad notices Bob Feller is like ten feet away walking with some guy. He’s like – Do you want to ask him for an autograph? So I go over there, this tiny little white haired blonde girl, and I was like “Excuse me Mr. Feller, can I have your autograph?”

He turns to me and is like “God damnit, no. I’ve been signing autographs all day, I’m not signing another one, jesus christ.”

I didn’t know what to do so I just kinda froze and walked back to my dad and teared up. My dad was so sad because he knew he was my hero, so he took the paper from me and was like “Mr. Feller would you reconsider? She’s 8, she reads about you every night, you’re her hero.” He was like “Give me the god damn paper!” Signed his name real quick, and my dad thanked him so much and walked back to me to give it to me. He was like “Here honey!”

Loud enough for Feller to hear (which was an accident lol), I was like “i dont want it anymore.”

After telling that story here and there I found out apparently he is a huge dick and has a reputation for being constantly nasty. Oh well.

Every celebrity with a social media account except for Chris Pratt and Tom Hanks.

2. A memory that will last a lifetime.

Wasn’t really my hero, but I met Billy Mays awhile back when he was visiting a local Giant Eagle grocery store for some reason or another. I think they had the money for him to come in and plug some product in-store.

Anyway, my mom worked at this particular Giant Eagle and she met him before I came into work. She had him sign an autograph for me before begging him to do her a favor.

That favor was charging in my direction down an aisle shouting “CLEAN YOUR ROOM, MANGIYKO”. Funny and a great memory thinking back on it, but I nearly shat my pants at the time.

1. There are good people, too!

My dad met a relation of Steven Fry’s (Qi) who at the time was/is my absolute hero for his narrations of the Harry Potter audio books. I am dyslexic and couldn’t read them myself so I used to just listen to him read them over and over again.

Anyway my dad got chatting with this relation and the topic turned to family and to Stephen and then how much he meant to me.

About a month later I received the Order of the Phoenix cd box set signed to me by Stephen. I still cherish it. Sure it’s not me meeting my hero but him taking the time to do that shows all about how great a man he is.

Most of the celebs I’ve met have been mildly disappointing or just kind of meh, except for Joshua Jackson who was obviously amazing.