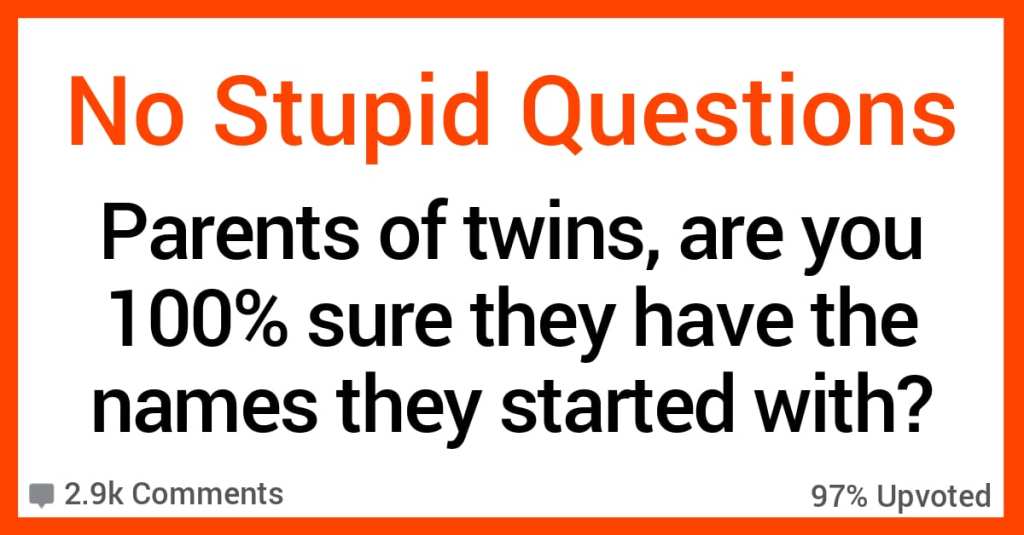 This definitely falls under a question that people who don’t have twins always think is dumb, so I’m glad someone used this subreddit to finally ask!

Parents with twins, are you 100% sure that both kids have the same name that they started off with? from NoStupidQuestions

You’ve got two infants – newborns, who all look sort of alike anyway – that are identical. You’ve just met them, so there’s no using personality to tell them apart. Unless they have something like a birthmark that makes an obvious difference…how do you stop from accidentally swapping them?

I think I would have had to use permanent marker until I was positive, but below are 16 parents of actual twins willing to weigh in on whether or not they’ve ever mixed them up.

It really wasn’t that hard for my wife and I after our twins were born.

Although, once I thought I had mixed them up after a bath, but fortunately I remembered that my daughter Kevin had slightly darker hair than my son Emily. lucky for that!!

15. Too late to swap names at that point.

My cousins were mixed up at some point in their first few months. No one remembers or is sure how.

They were doing a thing in science class about finger prints and the teacher asked anyone who had foot/hand/finger prints from birth or childhood to bring them in.

It was only when they compared the prints that were taken at school to their baby ones that they realized it didn’t match.

Ancient American proverb states: If a pair of identical twins get mixed up at the hospital and no one knows about it, did it actually matter?

Grandma gave us a bath when we were little and washed off the nail polish they used to identify us.

When my parents picked us up the only way she remembered who was who was by what outfits we had been wearing and what she put each one in.

I don’t believe she got it right based on that and just guessed. No idea how to go about discovering if we truly got switched or not though.

Identical twin here. My parents have never told me how they kept track of who was who. Currently, I wouldn’t trust them with that responsibility. This is unnerving.

11. This is the best twin nickname ever.

As a twin, I’ve been asked this countless times. I’m lucky, because I’ve got a birthmark, but Spare Parts does not.

My mom is an identical twin and my grandma told me she could always tell because their differences were obvious to her from the start, including that they smelled slightly different. Although I’ve inherited my grandma’s acute sense of smell IDK what she meant by that because my mom and aunt have always smelled the same to me.

But when I asked my grandma what differences she pointed out stuff I’d never really noticed before. That said, my great-aunt (grandma’s baby sister) told me that when my mom and aunt were newborns at the hospital they pricked them on the soles of the feet, one left one right, and that’s how they knew or checked the first year of life. By the scar on their foot. They probably don’t do that nowadays but this happened in the ‘40s

9. I imagine those moments happen a lot.

I’m 99% sure based on the fact there was 8 ounces size difference at birth. I put their name bracelets on them in the hospital.

The 1% is because the bracelets were a little loose so I adjusted them when we got home. Took them both off at the same time and then had a moment of panic when I went to put them on again that maybe I’d misremembered which baby was on the left and which one was on the right.

When I look at their birth photos now I can absolutely tell which one is which and that I actually didn’t mix them up. But I still have those irrational moments of panic that I just might have made a mistake.

Not me but a family friend who had twins. One of the boys came out smaller than his brother but despite that they still wore there name tags from the hospital for a long while before they just changed them into different clothes.

As for now, the one who was born smaller is still slightly smaller than his brother. There are usually defining features to twins that you learn to pick up as a parent as you have to watch them all the time

7. It must be what everyone is thinking.

When I was getting ready to take my twins home from the hospital, the nurse started to cut off their bracelets. I quickly stopped her, saying, “No! I won’t know who’s who if you do that!” She said I was the first mom to ever admit that.

We put hats with their names on them, or different colored hair bands around their wrists for the first month or so, and made sure to bathe them one at a time so one always had their hat or hair band on.

Of course, as they got older, we noticed subtle differences, but for that first month or so it was impossible to tell them apart! So yes, it’s possible in our sleep-deprived state that we weren’t careful enough with their hats or hair bands and mixed them up.

I’m a twin myself.

My parents had figured out names for both of us, but obviously didn’t know, which one of us should be called what.

But as I have a little flaw at my ear and was born with it, the nurses called it a rosebud.

My name is Rose

5. Not identical in every way.

I am 100% sure that we have our twins straight. They are identical in almost every single way, they even have the same birthmarks which blew their pediatrician’s mind. The only physical difference they have is that one kid has a single pointed ear, but when their hair covers their ears.

We can tell them apart because they make different facial expressions. One kid is a keeps her face more reserved but the other is a total ham.

So if we can’t get a read on who is who, we just make them laugh. One smiles and laughs with her eyes, the other cannot help herself she has to cheese.

4. But maybe it got switched back, too?

Can confirm the following: -one is heavier at birth -different birthmarks, freckles In our instance, my wife had to have an emergency C-section, so the hospital labeled them baby A and baby B, and we chose the order of names based off of who came out first and second. So yes. 100%. Mostly because we had help.

Two of my stepsons are identical twins. My husband gave me a funny look when I asked him this question – we’ve argued with each other in the past over whether or not they’re actually identical; I say yes because sometimes I can’t tell who’s who, whereas he genuinely sees them as looking completely different from each other.

To my knowledge he’s never got them mixed up, so I’m quite confident they still have their own birth names.

As a parent of two very identical boys (20g difference in birth weight) we painted a finger nail on each one a different colour at birth so the nursing team could tell them apart.

Eventually we found one freckle on one and not the other so that’s the fail safe!

These answers are hilarious, but prove that parenting is all about rolling with the punches.

They’re just names, after all.

If you’ve got twins and a story, weigh in below!