Scientists everywhere (literally all of them) are in agreement that the climate of the world is changing rapidly, and that the results, should the problem go unchecked, will be disastrous. One of the first casualties are the world’s glaciers, like Iceland’s Okjokull (aka Ok), which officially melted away back in 2014.

Scientists at Rice University will install a plaque containing a eulogy for Ok, which will no doubt serve as a reminder for generations to come that there were those among us who tried very hard to do something.

Cymene Howe produced a 2018 film titled Not Ok that documented the glacier’s demise.

“This will be the first monument to a glacier lost to climate change anywhere in the world. By marking Ok’s passing, we hope to draw attention to what is being lost as Earth’s glaciers expire.” 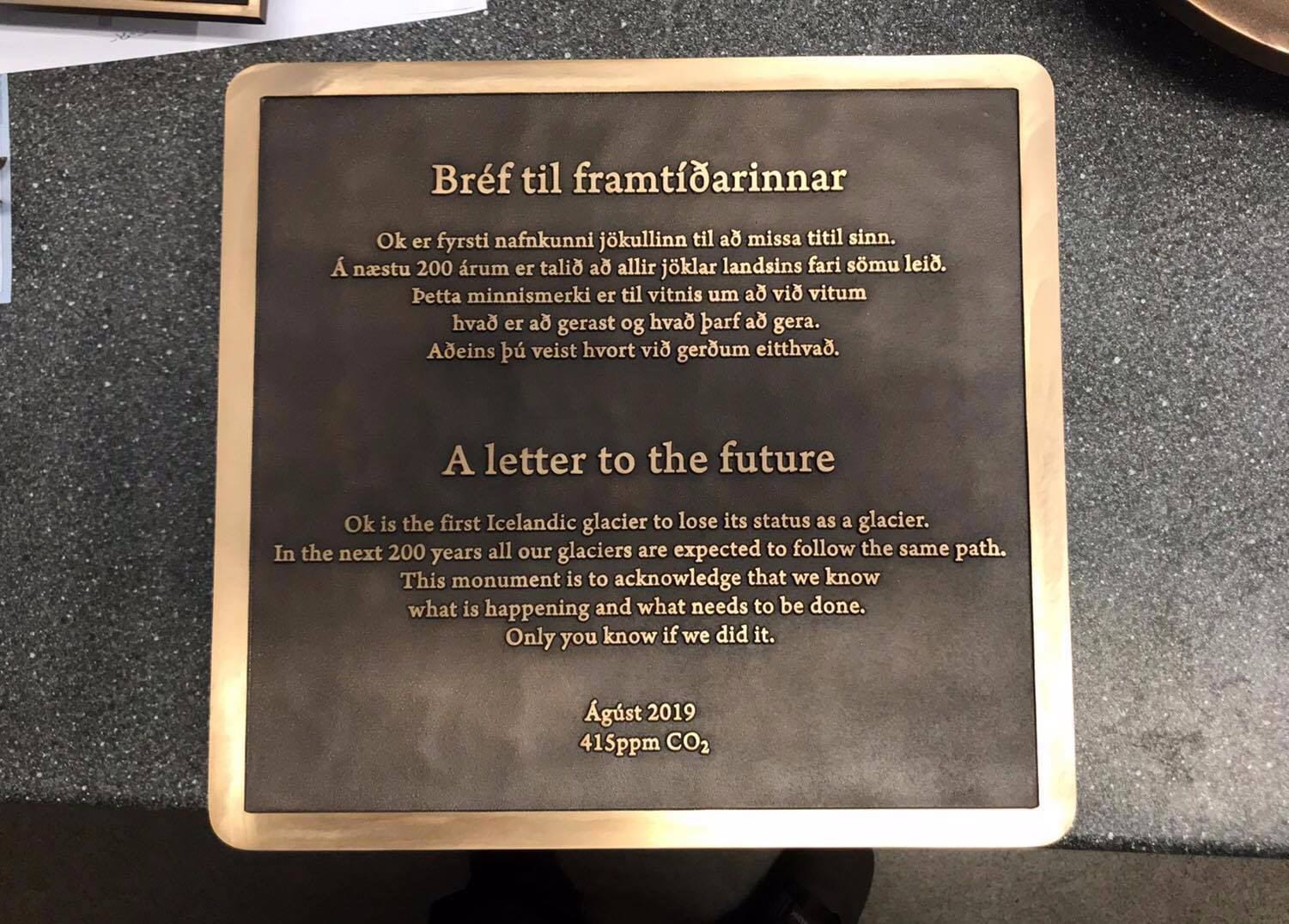 “Ok is the first Icelandic glacier to lose its status as a glacier.
In the next 200 years all our glaciers are expected to follow the same path.
This monument is to acknowledge that we know what is happening and what needs to be done.
Only you know if we did it.”

Not Ok. ⁣ After a rocky climb to the summit of Ok yesterday, I stood amidst a vast field of newly exposed volcanic rock, staring at this icy blue puddle in the central crater. It was hard to fathom that just a few years ago, a glacier named Ok (pronounced ‘awk’) existed right here in the surrounds of this crater. ⁣ ⁣ In 2014, Okjökull was first Icelandic glacier to officially lose its glacial status as a result of human induced climate change, and is now considered only as a mountain. A new memorial plaque will soon be placed at the summit with the following words: ‘In the next 200 years all our glaciers are expected to follow the same path. This monument is to acknowledge that we know what is happening and what needs to be done. Only you know if we did it’.

Not Ok‘s co-producer, Dominic Boyer, has high hopes that awareness can still be raised in time to make a difference.

“We wanted to create a lasting memorial to Ok, a small glacier that has a big story to tell. Ok was the first named Icelandic glacier to melt because of how humans have transformed the planet’s atmosphere. Its fate will be shared by all of Iceland’s glaciers unless we act now to radically curtail greenhouse gas emissions.”

According to the research done for the film, all of Iceland’s 400-ish glaciers could face the same fate as early as 2200.

Glaciers are the largest freshwater reserves on Earth and are also invaluable for the insights they provide into Earth’s atmosphere. The Arctic is warming twice as fast as other parts of the world, and record temperatures are being recorded all over the globe. Wildfires are becoming common from Siberia to Greenland and sea ice is decreases rapidly, putting different animal species in danger.

“One of our Icelandic colleagues put it very wisely when he said, ‘Memorials are not for the dead; they are for the living,” said Howe. “With this memorial, we want to underscore that it is up to us, the living, to collectively respond to the rapid loss of glaciers and the ongoing impacts of climate change. For Ok glacier it is already too late; it is not what scientists call ‘dead ice.'”

Here’s hoping that when people read the plaque 100 years in the future, it marks the beginning of serious, focused action to reverse climate change and not the beginning of the end of the world as we know it.