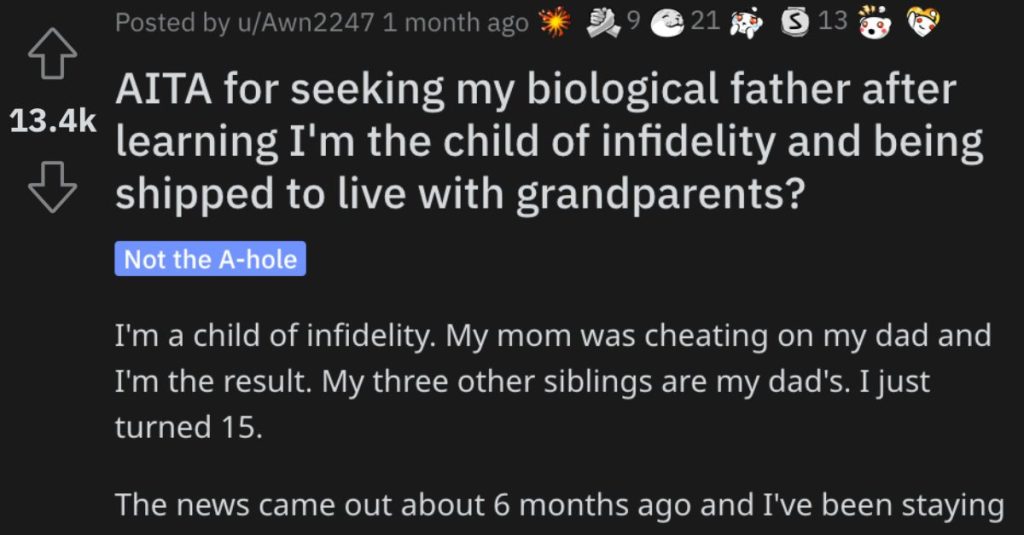 Is This Person Wrong for Trying to Find Their Biological Father? People Responded.

I think it’s only natural that someone would want to find out where they came from, don’t you?

And if you find out when you’re a teenager that you were the product of infidelity, you know that’s gonna mess with your head.

So is this teenager wrong for seeking out their biological father?

AITA for seeking my biological father after learning I’m the child of infidelity and being shipped to live with grandparents?

“I’m a child of infidelity. My mom was cheating on my dad and I’m the result. My three other siblings are my dad’s. I just turned 15.

The news came out about 6 months ago and I’ve been staying with my grandparents ever since. That was my dad’s condition to stay with my mom and try to make things work. I’m being treated like garbage by everyone because of it (parents, relatives, siblings, even friends).

I haven’t talked to my dad ever since I’ve left, I talk to my mom once a week and about 2 months ago asked her to give me information about my biological father. She refused but I managed to figure it out (my aunt, the only one who still treats me like before, had her suspicions about who he might be). I reached out, we did DNA tests and confirmed everything.

My bio father did not know I exist and is excited, his family are cool too. He told me he didn’t know my mom was married at the time and he left her upon learning. His wife and little kids are also excited, so I started spending time with them and have so far had a great time.

This has been secret so far (except for my aunt) but I was found out after I was video calling my dad earlier today by my grandparents and now my mom and “dad” also know, and they came here telling me how hurt they are by my actions.

I insisted that I’m hurt by their actions but they said they’re just trying to figure things out and what I’ve done is effectively giving up and trying to replace them. To be honest I have given up as I don’t feel like part of the family anymore. I asked what they did expect to happen and my mom told me to trust her that she will make things right for me.

AITA in this situation for giving up and reaching out to my bio father without telling my mom and “dad” and therefore trying to replace them?”

Check out what people on Reddit had to say.

One person said they’re NTA. Not in the least bit. 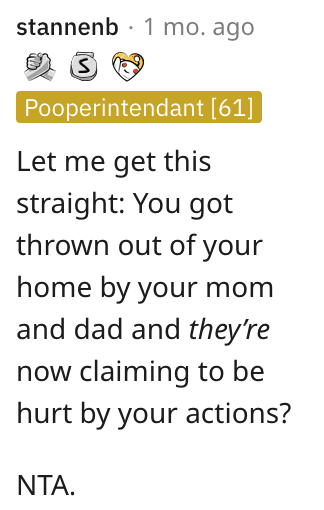 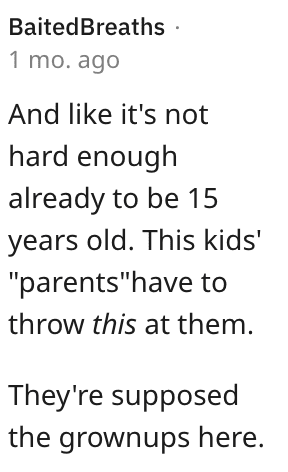 And another read said they sound like terrible people and they need to grow up.