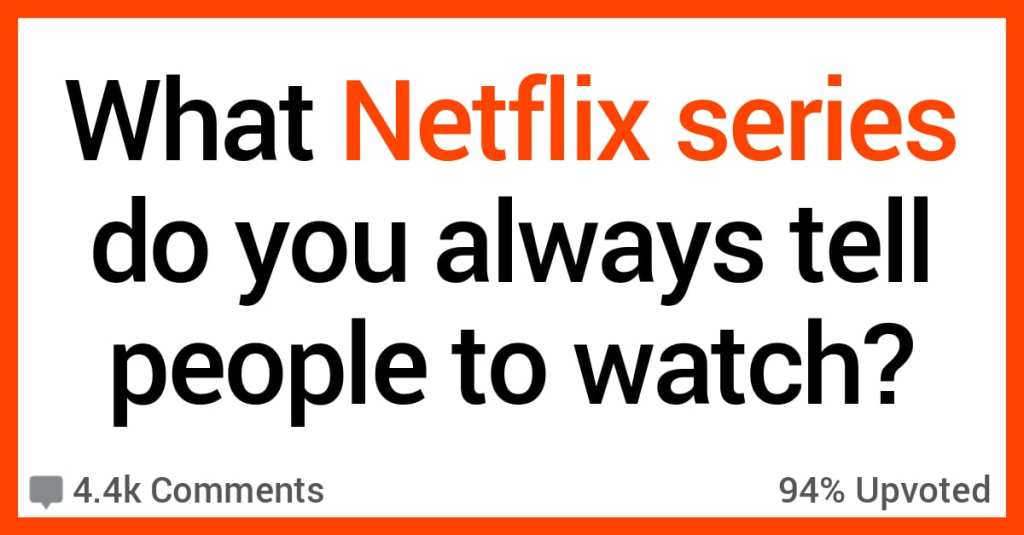 Man, Netflix is really pumping out the original content these days, aren’t they?

Every time I scroll through their page, there are tons of new shows that I haven’t seen yet.

Hey, I think these responses are a good start!

AskReddit users shared the Netflix series they like to recommend to people.

“I was gripped watching Mindhunter, so good.

How are they gona leave it like they did though.

It’s just such a chill vibe, and love the fantasy element.

It’s the perfect thing to put on if you just want to calm down and let your brain shut off (in a good way).”

In case anyone hasn’t heard yet they FINALLY have a filming schedule for the third season of Derry Girls!!”

Incredible acting, dark but funny, suspenseful, just excellent all around.”

“‘The Last Kingdom’ is excellent.

Its based on the Danish invasion of England. Great pacing, lots of intrigue in the plot and the relationship between the main character and king Alfred and the production value is solid.”

“Dark. It’s a very complex and absorbing show about time travel and paradoxes in a small German town.

It might not be for everyone, as it is a lot to take in. But it wraps up the story satisfyingly in 3 short seasons, instead of dragging on endlessly, which is nice, and I also think the acting, character arcs, soundtrack/score and cinematography are all great.

It’s the kind of show you need to really pay attention to or else nothing will make sense. I recommend watching it in the original German with subtitles. The dub tracks are terrible.”

My favorite show on Netflix by far. Took me about 5 min before I forgot they’re not speaking in english.

I fell off at Mexico though, like I felt like everything would be a letdown after the craziness of Pablo Escobar.”

“Kim’s Convenience. I can’t believe no one ever talks about it.

“Kipo and the age of Wonderbeasts.

Cartoon with a dope soundtrack, amazing plot and super funny.”

My husband kept trying to get me into it. I resisted…. at first. Now I’m obsessed.

But has a secret passion of letting her anger out by singing heavy metal karaoke at night.”

This was such a great show especially with the rise of the true crime genre.

That show is a true gem. Loved everything about it. Bummed it was cancelled but maybe it was better off.”

Hard hitting for someone who has felt lost after losing someone they desperately loved but full of Ricky’s humor.”

I can only watch one episode at a time. Each episode really hits hard!”

What are some Netflix series that you always recommend to everyone?