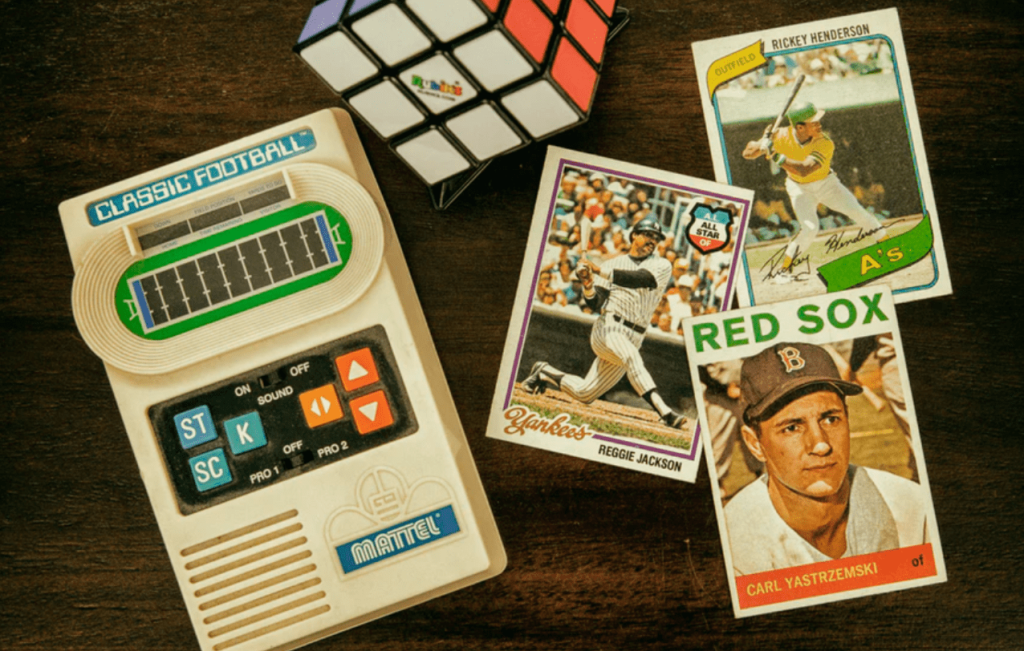 My dad always says that if he would’ve held on to his baseball card collection from the 1950s he’d be a millionaire.

Well, it didn’t exactly work out that way…

I don’t know if he threw those cards out or his parents did, but they’re LONG GONE.

And you know this is a pretty common story.

A lot of us had collections of all kinds of stuff when we were kids that suddenly disappeared for one reason or another.

In this AskReddit article, people talk about the things they had as kids that would be worth a lot of money…if their parents hadn’t thrown it all away.

“My brother had a bunch of first edition Pokémon cards, that he spent over a year collecting.

Mom took them away for getting in trouble at school, and they were never seen again.”

“I had the complete collection of teenage mutant ninja turtles figures.

I packed them into a box and put them away then later when looking for them i couldn’t find them… asked my mother.. “oh those, i threw them out.. you weren’t playing with them anymore””

“About 40 Indian Arrow heads collected on my grandparents farm for years by myself and my grandfather.

Also, full sets of baseball cards from 1969-1980, my mom decided to toss out all that “junk” when I moved out for military.”

“After my mom died, my dad met this crazy, Jehovah’s Witness woman and one thing led to another. About a month before my high school graduation we got into a HUGE fight over something  and she burned my collection of old Dungeons and Dragons books and magic cards.

Complete collections…Every 1st edition book in good condition signed by Gary Gygax. I guess my brother knew him at some point.

The real kicker? I rode the wave of the original magic the gathering launches back in the day, complete sets of the original series through…homelands? All burnt to a crisp.

Every once in a while when i want to be depressed about never being able to retire i look up the card values.”

“Nearly all of the first 24 editions of virtually every Marvel series, from The Fantastic Four to Spiderman (including the Amazing Tales in which he was introduced) to Iron Man, the Hulk, Thor, Sgt. Fury and His Howling Commandos. Basically all of them.

At a comic book store I was once looking at some collectors editions of those comics priced at about $1,500 to $,2400. I said to the clerk “Man, I used to have all of these.”

The clerk, whom I’m sure was Matt Groening’s model for Comic Book Man, without even looking up said in a bored voice, “Do you know how many times a day I hear that?””

“My mom had a collection of signed Beatles records that she threw away after she converted to Christianity because played backwards they summoned the devil or something.

For years I was hoping to inherit it when I grew up.

All I think it summoned was poverty. :/ “

When I was around 7 I used to stay at this friend of my parents house. She was older, and sort of a substitute grandmother. Her mother lived with her, she used to collect stamps. When she passed away the subbie gran gave me the collection.

My oldest brother had them in his room, I can’t remember why. My parents used to make a big pile in the middle of our rooms of what was messy and we had a couple of hours to put it all away. My brother faffed about and didn’t do it. So the remaining pile was thrown out. In that pile was the collection of stamps.

To this day I believe that there would have been valuable stamps in that collection considering the age of the collection, but I’ll never know.”

When they grew in value I searched for and hard disk to know that my mom sold it to a 19 yr old for $50.

I still curse my mom for doing that.”

My family wasn’t super well-off growing up, but for some reason they allowed my sibling and I to amass dozens of Barbies, hundreds of clothes, two doll houses, three cars, one RV, a plane, and so fucking much else besides. When I was 12 and had outgrown it all, my dad decided it was time to pass them onto younger cousins or otherwise get rid of them.

Looking back, we should’ve held onto most of it. I had celebrity Barbies, anniversary Barbies, Barbies that came with horses, or were ballerinas, or were otherwise novel in the Barbie world. I literally spent 10 years collecting Barbies and now don’t even have a single shoe to show for it.”

10. I bet you’d like to have those right about now.

“The original Transformers in boxes. Had all main characters and nearly all of the smaller bots. Got em when I was 11, 12 or so in the mid 80s.

Left for the military and mom had a huge garage sale…”

“Lynyrd Skynyrd had released an album where the album cover had the band members standing in a fire.

Not long after the release of this album, some of the members died in a plane crash and they recalled the albums so they could give it a more appropriate cover.

“A bunch of World War I coins that was thrown away because I never looked at them.

I knew they were gonna be worth a fortune so I tried to not go near them because I was extremely paranoid.”

“Not thrown away, but sold. I had a baseball card collection with over 200,000 cards when I was a teenager.

Needless to say, it was already worth a decent amount at that time. I have looked up some of the larger items in today’s retail markets, and those alone would’ve fetched around $20-25,000 USD.

My mom took them when I moved to my dad’s house because she was abusive. Sold it all for a few thousand on Craigslist and kept the money.”

“My collection of Polly Pockets.

I’ve literally seen some of the ones I had worth thousands of dollars now.”

“Robots, lots of robots from the 60’s, and 70’s, some were the tin type, some were plastic, some I haven’t even seen on the internet although I keep thinking someone has to have at least one left somewhere.

All in total about 25+ kinds of robots from my childhood, that my dad threw out because apparently when you turn 12, you don’t need toys. This is probably why my wife makes fun of all the junk I keep, because I never got the choice to part with them so now I horde all remaining childhood possessions.”

“I remember when state quarters first came out, my father sent me a collection of every first edition state quarter and one time I went to show my friends awhile later and couldn’t find them, I asked my mother and she said she had to use them for laundry.

We were very poor at the time so I understand, but I was a little sad by it as well because it was one of the only things my father ever sent me.”

It hurts to read some of those stories, huh?

Did your parents ever get rid of some items that became valuable a lot later? Or maybe you lost them or threw them away yourself?