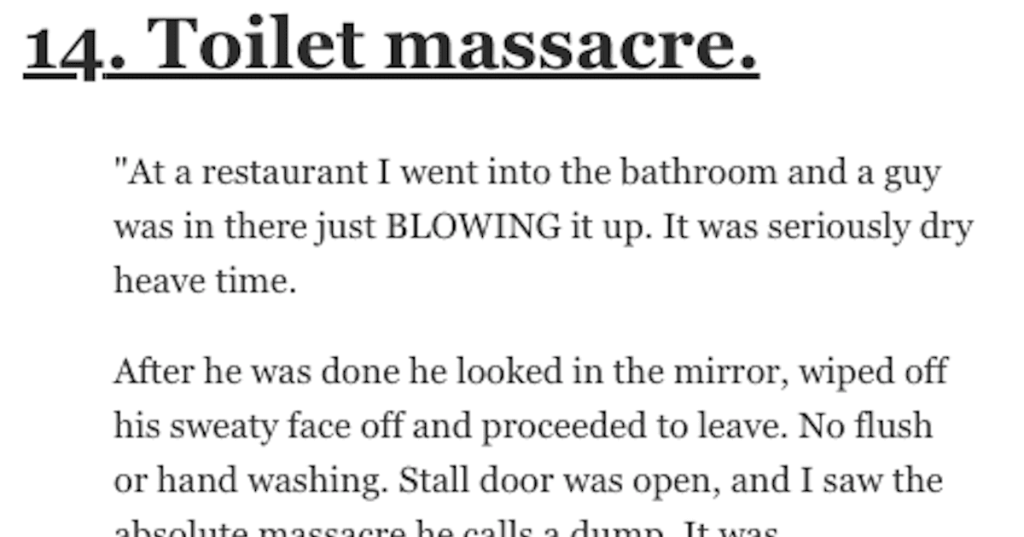 I’ve seen a couple of things in my life that were so disturbing that I literally can’t get them out of my head no matter how hard I try.

I’ll spare you the details but I can assure you that it’s not a good feeling…but I guess you just have to deal with those things.

Have you ever witnessed something that you couldn’t unsee?

She and her mom came to my gas station to buy alcohol. Mother was p*ss drunk.

Girl got some chips. Mother got her booze. Girl apologized a thousand times before she helped her mom back to the cab.

This girl looked like she was on the verge of a mental breakdown… 12 years old.”

“My sophomore year of high school my health teacher had an old student of his come in and give a presentation, she works in forensics.

I think he thought the presentation would be about what she does at work, how she got there, etc… instead she showed us photos of bodies her team had recovered.

We all sat there horrified. The worst one for me was a week old body they had found sitting in the Mississippi River. This f*ckin lady said, “look how cool the decomposition is on his tattoos!””

“Rotten.com hosted a picture way back in the day of a guy without a helmet who had fallen off of his motorcycle face first. Everything from his nose down was gone.

His tongue was just kind of hanging there. Lower mandible was totally destroyed. He was very much alive, conscious, and looking directly into the camera.

His eyes were the worst part. The genuine terror expressed in those eyes is something I will never ever forget.”

“Not as much seen as it was heard, but there’s a video of a family driving, and a brick flies off the back of a dump truck and smashes the woman in the front passenger seat in the face and all you hear are screams from the rest of the family.

There was no gore in that video, just the horrid sounds.”

“My toe hanging off my foot by a blood vein.”

“My brother passed away at the beginning of the year and his dog was trapped inside the house for three days, there was blood everywhere it was like viscera cleanup but worse, I can’t drink that image away.

I took care of the job so our parents would not see the details,I don’t wish that scene upon anyone.”

“My mother dying of brain cancer in a hospital bed.”

“The video of Nick Berg’s death.

I watched it when I was 24 because I wanted to see if I was as desensitized to real life violence as the media (at the time) claimed people of my generation were.

Well, I found out very quickly that I was not desensitized, and I have had nightmares about it ever since.”

“A group chat of my fiancé’s friends (including some I considered close friends of mine) talking about how I am just the absolute worst piece of sh*t in the world and how it was my fault he was suicidal.

This happening the morning after the absolute worst, heartbreaking, fight we’d ever had and I had no choice but to call the hotline and police because I was scared for him.”

” Truck leaves the highway onto the roundabout too fast and runs over an old lady crossing the street. Old lady became mush and my friend got partially covered in blood.

Both of us couldn’t go into class, stood at the stairs of the entrance shaking all day.”

A tree had fallen on the car and it had gone off the road. The frame was mangled and the seats were bloodstained.

I didn’t see the bodies but I saw the blood everywhere the next day and I could imagine the bodies.

And the blood was everywhere. I was 10 or 11 and it was in a third world country and the hospitals there were very bad.”

“A girl in her early 20’s that had hanged herself the day prior and was on life support so her organs could be harvested, when I saw her she was convulsing lightly.

Just that she was clearly braindead but also that she had enough brain cells left to make movement possible, it wasn’t gross but it did make me sick to my stomach.”

“My dad’s junk accidentally popping out of his pj pants when I was a kid.

Sometimes that image pops in my head when we hang out.

“At a restaurant I went into the bathroom and a guy was in there just BLOWING it up. It was seriously dry heave time.

After he was done he looked in the mirror, wiped off his sweaty face off and proceeded to leave. No flush or hand washing. Stall door was open, and I saw the absolute massacre he calls a dump. It was EVERYWHERE but in the toilet.

On the way out I saw him just chilling at his table like he didn’t just spread hot tar in there.”

In the comments, please tell us something that you can’t un-see from your own life.