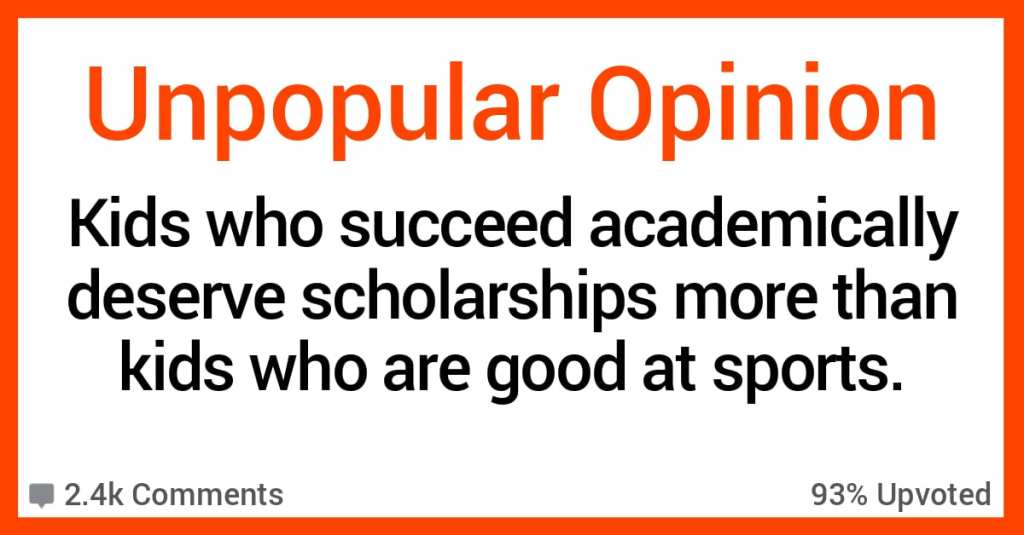 At the high school I went to, if you were good at basketball or football, you were THE MAN.

You got all the breaks and everyone in the building, including the teachers, heaped praise on you. And some of them even got to go to college on scholarships to play sports.

And there were plenty of really smart kids in my school who went to universities on academic scholarships, but they received little or no fanfare, as you can probably imagine.

But who deserves the scholarships more? The jocks or the brains?

Here’s what one person had to say about it.

Kids who succeed academically deserve scholarships more than kids who are good at sports. from unpopularopinion

Let’s take a look and see how folks on Reddit responded to these opinions.

“The harsh reality is that sports bring in more money for undergrad than academics. Part of it is supplemented by boosters. So while you can attribute some of it to the school, it’s how much the boosters are willing to pay vs how much revenue the sport can bring in.

Also, to be fair, there was waaaaaay more scholarships given to academics than there are sports scholarships. People just need to look.

As for the doctors/sports thing, there’s way more doctors/teachers/lawyers than there are sports figures. And even most of them don’t make the millions we think of. And the ones that do supplement a lot of it with sponsors.

So while you can say sports players shouldn’t make as much money, the fact is that they’re on a platform for tv networks to make money, and are compensated to get a share of it at a lower dispersion rate than other professions, which translates to more money.”

“Your argument completely ignores the fact that people who are good at sports also struggle.

Smart people and athletes aren’t only naturally good, they also practice a lot.”

“Getting into a Division 1 athletic program is significantly harder than getting into a top 100 academic institution.”

“I agree, but not with your reasoning.

People who are good at sports have to work their *sses off too. Some people are born with more talent than others, but they still have to train like crazy. You can’t even use the argument that its not the same for academics.

I was born with a great memory, and as such, I barely study and ace tests, while my classmates study for hours and still get Cs. Everything in life is a combination of luck and dedication.

You cant just belittle sports players by saying that they haven’t worked hard to reach their position. But I do agree that doctors are objectively more helpful to society than a basketball player.”

“I got a huge scholarship for doing nothing more than studying a little, telling the teacher what they want to hear in essays and going to a school that wants to bolster their engineering program.

Sure, full rides might be uncommon academically but i guarantee you the D1 athlete has put in 10x as much work or more than 99% of the kids with academic scholarships.”

NBA players capture the attention of millions of people so companies can sponsor them and run ads on their game, of course they will be paid more than doctors.”

“As a former student-athlete and college graduate, I disagree. I had both an athletic scholarship (NCAA Division II) and academic scholarships, and BOTH are a struggle.

Athletes have upwards of 12 practices per week, each around 2-3 hours in length. Includes weight lifting, sport training, film study, and team building. Academics demands around 16 hours in-class per week, and easily a few hours of studying/homework added on after class.

They are BOTH demanding. And the higher you climb on either scale, the more demanding the activities become. I was smack in the middle of both and I worked my *ss off to graduate.”

“It’s very hard to be good at sports at a high level. Don’t put down someone else bc u don’t think their thing is important.

Being a doctor is an amazing job and I have far more respect for a doctor than a NBA player, but it’s impossible to deny that the NBA player has probably put in a lot more effort to get where they are, and its almost impossible to become a sportsman, so those who achieve it are impressive.”

“I have a friend who is a national swimmer.

He wakes up at 5 am to train and goes to school at 8. Then he trains after school and arrives home at 11pm. He still gets decent grades even though he can’t sleep.

This guy deserves more than someone who gets better grades but has no responsibilities.”

“In Division 1, these programs bring in billions for Universities and the NCAA. kids who succeed academically don’t bring in revenue by getting good grades.

Theres a strong argument to be made that college athletes (particularly basketball and football) are under compensated.

To your second point, obviously doctors are more important to society than professional athletes. But athletes are in an extremely profitable industry with major barriers to entry.

I went to a small-ish college. I got an academic scholarship because it is good business for them; when I chose the school, I raised their average SAT score.

And, I know that for lots of people, athletic scholarships get them into a school they might not otherwise have been able to get into. If you went to a bad school district or don’t have enough money growing up but you’re good at sports, sports can be your ticket out of poverty.

They serve a purpose. Scholarships are a useful way to diversify your student body.

I should also note: you conflate sports scholarships with NBA players. The vast majority of scholar-athletes don’t go pro. Lots of (most?) sports programs aren’t even moneymakers for the school.”

“There are currently nearly 14.5 million universities students in the US…..

There are 460,000 athletes at US universities…..most of whom do not receive full athletic scholarships……partial assistance.

The number of people who are academically successful enough for college is large and frankly isn’t that special.

And for this…university athletes have to commit nearly 20 to 30 hours a week in training, study and additional work along with the course work required for the degree. They do not get pay for that work nor are they allowed to work in most cases due to restrictions from the NCAA as well as lack of time.

Most people who hate the student athletes would never commit to the 5am training sessions 4 or 5 days a week, additional meetings and practice even during the offseason REQUIRED of those people….it is an all-consuming job which exempts most of these kids from the usual activities college kids enjoy and engage.

Most of them never realize, for instance, that as a college baseball player not on full scholarship we usually missed most Saturdays in the Fall which were big social events at our school because we had a fall schedule where we would load a bus to drive 3, 5 or 6 hours of baseball scrimmage with another university which often would last from 9am to 5, 6 or 7pm.

We often left late for Christmas break after exams for additional workouts, training or practice….then returned early because the season really got going in late January.

Being a college athlete isn’t just showing up in nice dorms, taking in the cheers, fighting off the girls\guys then laying around all year…it is college with a full time unpaid job at most schools.”

Which side are you on in this debate?