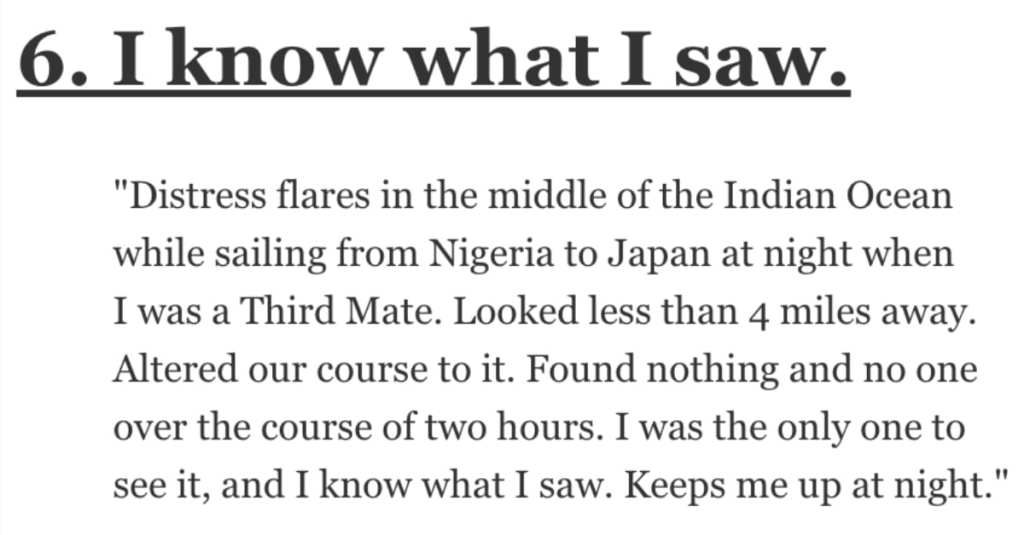 What’s the Weirdest Thing You’ve Seen Out on the Ocean? Here’s What People Said.

I’ve read a few stories here and there about sailors or other people who make their living on the high seas encountering things that are downright terrifying.

Strange lights, creatures, and other inexplicable experiences make me wonder what’s going on out there in the depths.

People who’ve spent a lot of time at sea shared stories about the strange things they’ve seen on AskReddit.

“Spent a lot of time sailing commercially in the Irish Sea.

On night watch you are always acutely aware of everything around you due to the silence and darkness. Some of the sounds you hear are deeply unsettling. I remember on a perfectly still night just hearing a gentle knocking noise coming from what seemed like the outside of the hull at the waterline.

No idea what it was but it freaked me out all shift.”

Last summer my crewmember and I were both falling asleep on a perfectly calm night when the whole boat started violently shaking. I wasn’t sure if a tree had surfaced and punched through the hull, if we were somehow hitting bottom, etc etc until we both storm out to the back deck in our underwear to jump in the skiff.

Then, in the 10:30pm sunset we witnessed the cliffs around us shed layers of house sized boulders with dust plumes hundreds of feet into the air. It was deafening

Turns out it was a 7.8 earthquake. Luckily the tsunami was very small, but I’ve never been in a tsunami. My crewmember was posted up on the stern and me at the helm, scouring the horizon so we could motor into the wave of a lifetime.”

“Sailed on tallships for a good while, among other things.

But the only creepy story was at port. The only person who had ever died on the ship was over a hundred years ago, and he fell from the rigging. Went splat. One of the crew was up furling sails, and was about to step out onto the foot rope that runs along the yard.

He said he got an overwhelming urge to not step on it, and felt a tug on his harness keeping him from stepping out. He was so freaked out he kept the other two guys behind him from getting on the line as well. The other guys started getting a really bad feeling too, and they decided to check out the footrope. It had been really degrading on the inside, even through the outside looked mostly fine.

The line probably would have snapped as they climbed out there, and they would have fallen, as you are pretty much free climbing until you get to a stopping point.”

“I was on a Barquentine sailing vessel a few years back, off the coast of Puerto Rico, in the middle of a nasty storm.

We were dousing our sails when things began to look calm for second. People were going to rack out when we heard a meaty smack against the side of the ship. Somebody had fallen from the rigging and hit their leg on the gunwale then into the water.

Swells were only 5-7 ft, but well enough to conceal a man overboard. The night was pitch black, except for on occasion there was this bright blue lighting. Every few minutes it would give just enough illumination to see past the rain and wind. It was so hard to see where this guy was even with binoculars, man overboard modules, or whatever else we could throw that floats and lights up.

An emergency small boat was sent out to bring him in but couldn’t find him. As 12 minutes had passed without laying eyes on him, it wasn’t looking good. Just a split second later, the lighting gives off the biggest spark and crack of thunder all night.

The whole area was lit like a floodlight was shined right above us, and there was our missing man. When the light was gone, the boat and the man overboard called out to each other. He got out of the water safely.

I don’t know if the incident qualifies as supernatural, or divine intervention, but without that final burst of lighting we would never have found our man out there. The night could have ended a lot grimmer, but he left that disaster with only a broken femur.

Still, I think it’s amazing the man tread water, with a broken leg, for 12 minutes in the middle of a storm. I’ll never forget that.”

“In the Gulf of Aden having been at sea for a while and with absolutely blistering heat, I heard my nickname called 3 times. Clearly and loudly.

It was my first time with this particular crew and none of them knew my nickname. My best guess is dehydration and stress but I’ll never forget it.”

“Distress flares in the middle of the Indian Ocean while sailing from Nigeria to Japan at night when I was a Third Mate.

Looked less than 4 miles away. Altered our course to it. Found nothing and no one over the course of two hours. I was the only one to see it, and I know what I saw. (My watchman was down closing cabin shades.)

I understand why we had to move on. Keeps me up some nights though. Did we come so close to saving someone’s life, and just leave them there? Alone in the ocean. No food or water.

Did someone think they were rescued but we ended up too far from them? Should we have waited until daytime? Did I just hallucinate?”

“The closest to supernatural or at least something I can’t explain, happend half way between Cornwall and the Scillies. We were sailing in a fresh breeze, 5-6 ft. swells maybe.

That’s perfectly fine sailing weather but the boat will rock and there will be quite a bit of noise from the wind, the sails and waves. So we sail happy along when suddenly the sea is perfectly flat and every thing is quiet, like somebody turned the sound off. I look around and the water is pich dark.

It only lasted for a minute and then everything was back to normal but I got a really eerie feeling.”

“Flew helicopters in the Navy for a few years.

On my first deployment to south east Asia I was flying over the Sea of Japan and saw a large pulsing aura of red light far enough below the surface I could not make out a source. We were 30ish miles from shore and had not been briefed on any assets in the area that might make something like that make sense.

No erroneous indications on instruments or radio chatter. Just slow steady pulsing red light. We saw it, circled it a few times, made a note of the time and location we encountered it and my crewchief asked if I wouldn’t mind getting the hell out of there. So we finished our transit and I made a note of everything in my debrief.

I passed it up the chain of command but they basically wrote it off as some sort of visual phenomenon we had from a long day of flying in dry suits. It’s always been hard to imagine our entire crew hallucinating the same thing.”

“When I was roving patrol on a submarine I always thought I saw someone walking parallel to me down missile compartment upper level.

If I was on the port side then I saw them on the starboard side and vice-versa. I always chalked it up to pipes and valves creating weird shadows. Additionally, it felt “heavy” on that level like there was some sort of presence – the feeling you get when someone’s watching you.

I never told anyone, then one day a few weeks into patrol, one of the other rovers asked me if it felt “weird” up there. He specifically said that he saw someone up there too just like I had.

We shared stories and then talked to the third rover and he said “I only go up there to do my rounds every hour then get the f**k out of that haunted level”.”

“Grandad was a chief in the navy, dad is a merchant marine, I’m a sailor right after my first tour.

Me and grandad are both medical so we have some ghost stories. One of his stories was a case of mass somnabulism (sleepwalking) on the USS Roosevelt that he documented but was never publicly addressed or explained back in the 60s. Sleepwalking is dangerous not only because of the risks of injury, but because of the implications of underlying issues like night seizures or sleep apnea.

A few dozen people sleep walking a month is not unheardof on a carrier, but apparently in a three month period there was over 400+ individual cases from over 100 sailors, from lower enlisted to senior officers, that were reported independently. These people came from all over the carrier and he said he couldn’t find any link to them. He was tasked with recording, but was never briefed on why it was happening, what caused it, or why it stopped. It was just dropped.

Our speculation is drugs, or government testing, but we’ll never know for sure. That’s one of my grandad’s stories.

One of mine was on a small boy (smaller ship) that was getting rough turbulence while underway in the pacific. I swear we went into some kinda Bermuda triagle s**t because we got into this super calm part, I’m assuming the eye of or some s**t, I’m not a meteorologist, and it felt like an out-of-body experience. Like the world paused and everything kinda became quiet and ringing like tinnitus for what felt like at least half an hour.

And then suddenly it all came flooding back like being forced back into my body and being aware. It was still calm at that point, and we’d only felt the calm for maybe a few minutes, but I talked to some of my guys afterwards and they felt something similar. At the calm point, some said they felt high, I wouldn’t know about it, one of our lieutenants said he felt like he passed out and woke up like sleepwalking. It was a surreal shared experience.

Doc on the ship, our corpsman chief, said it was probably some pressure drop that made us feel disoriented though but we still joke we all got abducted for a minute and returned.”

Have you ever seen anything strange out at sea? Or in the sky? Or in the middle of nowhere?