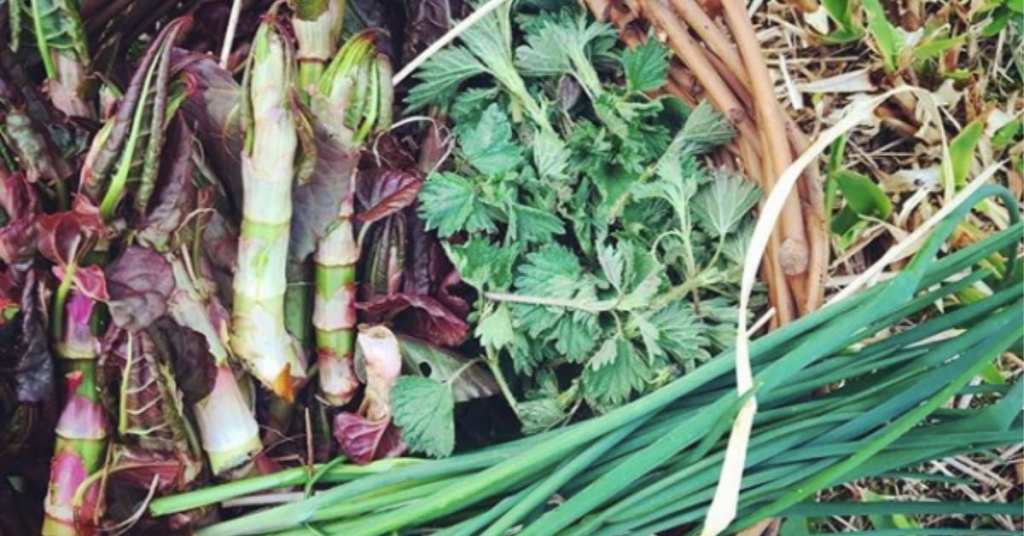 10 Common Weeds That You Can Totally Eat

No, not that weed, y’all, come on – we already know it’s edible (wink wink nudge nudge). There are other “weeds” in your yard and in our common areas that can be eaten if one likes delicious plants and enjoys foraging for one’s own dinner.

The idea is becoming more and more popular as chefs and foragers post with hashtags like #wildfoodlove, and people are starting to realize that they might be paying for weeds in restaurants that they could have pulled from their backyards.

This prolific, indigenous plant was eaten by Native Americans and is sometimes called poke sallet in the South.

You cannot eat it raw, but when blanched in boiling water, the shoots are yummy.

It is toxic to humans and animals alike when not cooked properly.

Wild saladings, some of them harvested at home: wintercress, violet leaves and flowers, sheep sorrel, jewelweed (all from the garden); ground elder and garlic mustard – foraged #forage66

You’ve probably heard of (and eaten) watercress, which is a later season version of this plant, which looks and tastes a bit like arugula.

The plants tender, yellow flowers and stems are really delicious.

Wild food is just about everywhere right now. 💚 . The other day, we were on a walk in a field near our home since all the trails are closed. The path leads to steep sandstone cliffs that look out onto the big, empty sea. If you stand on the ledge, looking ahead, it almost feels like flying with wind, sea and sky intermingling in an expansive plane of blue. . We've walked this path many times, but this time, my husband notices a little bunch of wild garlic nestled against the path. And when we opened our eyes, we realized that field garlic covered the entire slope. We'd never seen it before until we decided to look. Funny that. . There's wild food just about everywhere. It might be field garlic on a slope, or dandelions in your yard, or purslane pushing its way through the cracks in a city sidewalk. And wild foods are also some of the most nutrient-dense, too. Like miner's lettuce which is rich in vitamin C or nettles, which act as a natural anti-histamine and are loaded with various minerals. . We plucked these from the dirt, chopped them and then simmered them in cream and broth. We might also blend them with yogurt and fresh parsley to dress a salad of wild greens for lunch, too. . You can use them in place of garlic, green onions and shallots in your cooking – adding brightness to salads, bringing depth to soups or a little punch of flavor to baked goods like biscuits and sourdough breads. . I'm thankful that, despite trails being closed, we live far enough away that we still have access to nature. Being outside brings some measure of peace, and finding wild foods keeps us out of the grocery store, too. 💚 . . . . #wildgarlic #fieldgarlic #foragedfood

Lawn chives or wild garlic is sold in bunches these days at farmer’s markets, and the smaller versions of native ramps or the garlic you buy in the store are just as flavorful.

The sour crimson fruits of autumn olive (or autumn berries) are as tart as red currants and good used in similar ways.

You can eat every last bit of this plant, and with roots that resemble horseradish, leaves that taste like garlicky broccoli rabe, and yummy late-spring buds, why would you not?

You can eat them raw and dipped in things like hummus or you can braise them and cook them slow, like a starchy vegetable.

Foraging for dinner 💚Japanese Knotweed (the purple shoots next to the Nettles and Chives) is such an under-appreciated wild food and mostly seen as a maligned “invasive” (I prefer the re-frame “opportunistic”). But this plant is insanely good for you- the highest known source of the antioxidant resveratrol in the world, which is the same compound red wine gets its heart-healthy benefits from. It’s basically a super-food and instead of putting herbicides on this, we should be eating it! The young shoots and leaves are the edible part, and the root is an incredible medicinal often used in Lyme protocols that manifest with joint pain and lots of inflammation. For eating, the shoots are sour and a little bitter and also mucilagenous. Lots of folks use them as a rhubarb substitute in their cooking bc of their sour flavor, but I like them more savory and cook them like I would asparagus, with a little olive oil, garlic, salt, and lemon. I like them as a side dish, but the possibilities are really endless. Here’s to re-framing this plant from a scourge to the amazing medicine and wild vegetable that it is! . . . #japaneseknotweed #fallopiajaponica #eattheweeds #reframe #weedwifery #opportunisticplants #wildfood #wildfoodlove #wildharvest #nettles #whatsinmybasket #foraging #resveratrol #hearthealthy #superfood #foodasmedicine #kitchenmedicine #eatwild #lymedisease #inflammation #milkandhoneyherbs

This invasive plant is as delicious as it is annoying.

It’s spring shoots resemble asparagus in looks, but rhubarb or sorrel in taste.

You can use it raw or cooked, and it works well in dishes that need a sour boost.

NEW LESSON ✨ . . This month in the Plant Wisdom Portal we are studying chickweed! Last week our lesson was on how to identify it properly and this week we dove deep into its medicinal qualities and how it works in our body! It is super nutritious and has been useful in shrinking cysts and tumors and so much more! . . With all the rain and cool spring weather we are having, chickweed is become lush in rich soils and shady areas in my yard! After this weeks lesson I promise you will be on your hands and knees gathering some chickweed to add to you diet and medicine cabinet! Join the Plant Wisdom Portal today to learn about this plant as well as many other plants, remedies, wildcrafting and foraging and herbalism! {link in bio} . . . . . . . . . . . . #chickweed #stellariamedia #chickweedflower #herbalist #herbalism #foraging #wildcrafting #springishere #springtime #seasonalherbalism #plantwisdomportal #plantwisdom #plantspiritmedicine #eattheweeds #eattheweedsplease #foodasmedicine #savethebees #wildfoodlove #wildfood #wildmedicine #herbalmedicine

People gravitate toward its nutty corn silk flavor, and it’s best eaten raw on a sandwich or as a bed of greens for seafood.

Baby mugwort … oh how I love you! This was our first harvest of mugwort as it was starting to choke out our raspberry bushes, so we pulled up the roots & sniped the tops of them to bring in to be dried! . The mugwort is now drying on our dining room table, until it cracks when we crumble it (that’s how you know it’s completely dry) and then it will be put into a jar for later use. . Mugwort is such a magical plant and it is one of my FAVORITE tinctures to take before bed for a deep sleep, with possible vivid dreaming. Mugwort helps you open your third eye and allows you to really “see”. She will forever be my first plant ally and I am thankful she provides such amazing medicine 🌱💕

Aside from sounding like it belongs in a Hogwarts potions class, this weed has a sage-like fragrance and are delicious fried like tempura.

For many of us, the dandelions have begun blooming and it's the perfect time to begin harvesting them for dandelion flower tea, jelly, cookies, or other fun things. (If your dandelions aren't blooming yet, now's the time to harvest and eat the leaves.) You'll find lots of how's and why's on my blog (link in my profile) and in my book (available on Amazon) " The Ultimate Dandelion Cookbook."

Dandelions are popular in everything from salad to tea, so maybe stop hating on the ones in your yard so much!

Remember, if you are not educated on edible weeds, take care. Some of these may closely resemble plants that are harmful to humans, so if you’re not 100% sure, don’t eat it. Please.

Have you tried and discovered that you liked any of these? Share with us in the comments!