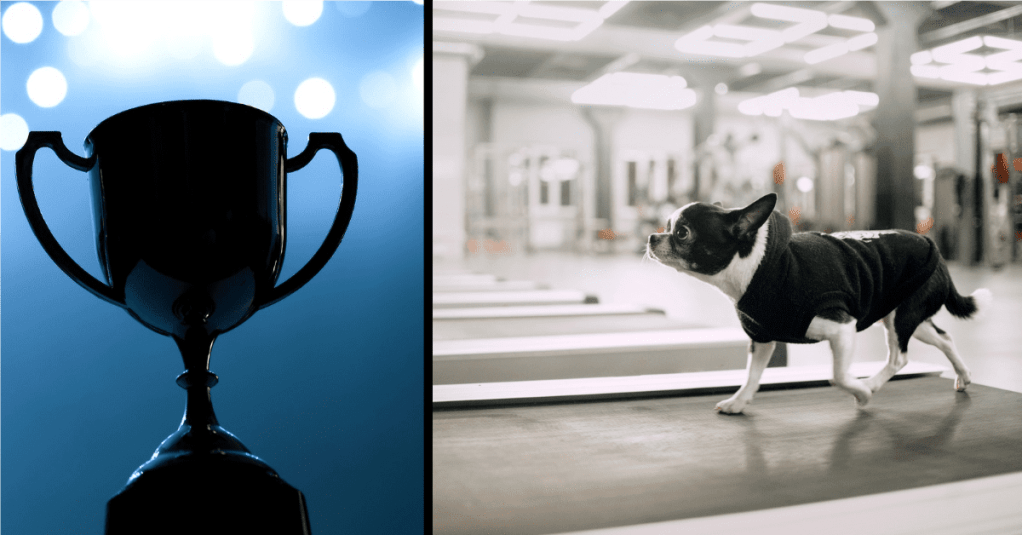 Ah, fall – the greatest time of year. It marks the return of pumpkin spice lattes, cozy sweaters, the kaleidoscope of changing leaves, and – most importantly:

Every year, I stuff my face as quickly as possible so I can go marinate on the couch and watch a bunch of people run around with a bunch of dogs way better behaved than any dog I have ever met in real life. Similarly, every year I think to myself: just what does it take to be a dog handler at that level of competition? Surely there’s way more to it than being able to run gracefully in business formal.

Here are 10 secrets from top-tier dog handlers who have been through the ringer and back.

So much for Fido and Rex. Dog handler Sharon Reeves’ Australian Shepherd’s full name is “Veritas Sexy and I Know It.”

Why the super long title?

“Veritas is my kennel name, so whenever I breed a dog, every dog has the word veritas in their name.”

2. There’s no money in winning.

Handlers aren’t compensated for winning with any cash prize. The victory comes with a whole lot of kennel club swag and amenities, but it’s not about the money. The honor is in competing at such a prestigious event.

“A lot of my peers have had their knees and hips replaced. You get tired just from being at the show.”

Let’s hope these handlers know good orthopedists. That’s a lot of left turns in one day.

4. The dogs eat whatever they want.

No restrictions in the ring. The dogs have a whatever-the-heck-you-want diet ranging from potato chips and apples to filet mignon.

5. The handlers’ cars are inspected.

The American Kennel Club inspects all the handlers’ cars before official registration for the competition even begins.

Why the strict search?

Basically, officials are looking to see that handlers have the right supplies that could keep dogs alive and well during even the apocalypse. Heat monitors, fire extinguishers, 30-gallon water tanks, and appropriate air conditioning are just a few things on the checklist.

You read that right. Handlers use chalk and even dryer sheets to give a dog’s coat that little extra shine.

7. There are special toys and leashes.

Apparently “Best in Show” wasn’t too far off. Like most other high-level competitors, dog handlers have their own set of rituals and traditions before competition. If a dog’s special toy or favorite leash is missing, it’s easy to get caught a little off-guard.

“I have one I’ve been using probably since 2004 because I know many dogs have had great success with it.”

8. Biting gets you disqualified.

No ifs, ands, or buts about it. If a dog bites anyone or displays any aggressive behavior, it’s a surefire way to get kicked out of the competition and pretty much put an end to that canine’s career.

Yup, there are treadmills backstage at the competition, but they’re not for exercise.

Handlers use treadmills to train and coach their dogs to walk at just the right trotting pace. That’s a lot of time, effort, and money just to get the perfect supermodel gait.

At dog competitions, posture is everything. To help get their dog’s stance just right, some handlers have their canine friends practice standing on soup cans.

Ugh, now I really wish that I was a dog. Oh, to be a pampered pup eating filet mignon…