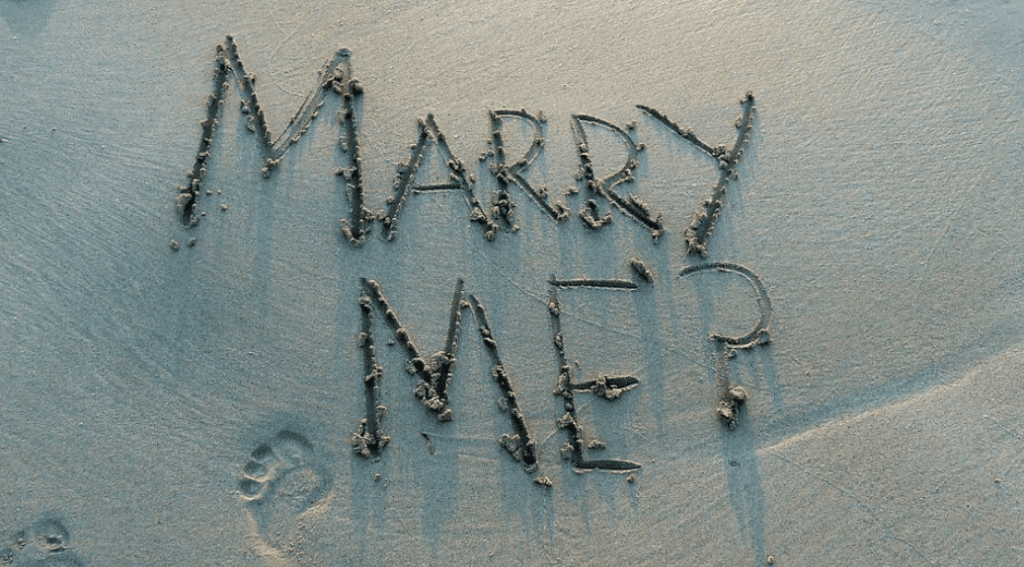 I’ll never understand why some people ask their significant others to marry them on a Jumbotron or something kind of similar.

What if the other person says no? Humiliation for all involved.

In this AskReddit article, people share the worst marriage proposals they’ve ever witnessed or heard about. Hang on tight for EFO (Embarrassment For Others).

1. Right in the grocery store

“My parents. They were in the produce section of a grocery store when my dad says “all our friends are getting married we should too”. My mom thinking he was joking just said yea and moved on with shopping. A couple days later she got to thinking about it and with the serious way he said it had her confused.

She goes to him and asks if it was a serious question or if he really was just kidding around. He responds with “well yea I thought we were engaged now” 34 years later and they’re still married.”

“I remember seeing a YouTube video about a guy who proposed on some light-hearted late night game show or something. Everyone was getting into the fun, happy, late-night vibe except the woman, who had a look of pure horror on her face. Eventually she whispers “Can we…..can we talk about this later? Please?”

There’s this awkward silent pause that goes on and on, while the couple both look like they want the ground to open up and swallow them whole. Then the show starts playing some cheesy upbeat “Let’s go to the ad break!” music.

The juxtaposition between the humiliated couple and the cheesy party backing music, just made it hilariously tragic.”

“I had a Disneyland proposal. My ex and I went there for Christmas after 4 months of dating. 2nd day we were waiting in line for the haunted Mansion, and he suggested we get a pic on the steps. I’m standing there trying to smile for a picture and he gets down on one knee and goes at it while a cast member takes a video. People are noticing and cheering for us. I was totally blindsided.

I felt like I had no choice but to say yes, even though I really did not want to. The ring was given to him by a friend, and was ugly, not my style, and not even close to my size. When we got home he manipulated me into letting him move in with me and I was stuck with him for another year until I managed to move myself away, get some distance, and leave him. It was terrible. I should have risked him leaving me on the side of the road in California instead.”

“Our 6th grade English teacher told us of how a kid found a ring in the parking lot and proposed to her.”

“I’m on good terms with one of my ex-girlfriends, so I got to hear this story of how her husband proposed to her:

She gets the socks. The ring is in the socks. He proposes. He actually thought he was being romantic. She thought it was weird as f*ck.

Even weirder, she said yes, and they’ve been married for more than ten years.”

“My buddy’s girlfriend kept telling him that he couldn’t surprise her. After college, they were planning to move together to another town. About 6 months before graduation, he told her he wasn’t sure about the move or their relationship. She turned around to cry. He called her name, and when she turned back, he was on one knee. Did it to surprise her.”

“A friend of my sister had specifically told her boyfriend she hated public proposals and didn’t want a bunch of people there, so what does he do but gather their entire extended family to do it. Ugh.”

“One day he drives her to a surprise location for a date. He takes her to this random house in the suburbs with a dog tied up in the front lawn. He then proceeds to propose and explain how her bought the house of their dreams, dog included, and how they could raise their children here. The woman (my friend) was so flabbergasted that all she said was something like “wtf, you bought a house and a dog without even telling me?”

He thought he was making this grand romantic gesture, but she was super annoyed that he had apparently arranged their whole lives without even asking for her input. Needless to say she said no. Last I heard he lived in the house for a bit and then sold it for a loss. No mention of the dog, but I’m hoping it wound up with a good family.”

“My dad walked through the living room and tossed a ring at my mom. 27 years married btw.”

She was on a date with her boyfriend and they both got back to her place. He want to the bathroom and then she went in. While in there he calls to her “hey did you see what I left you?”

She said, “I’m not looking in there, you’re gross”.

She then opened the door to asked him what the hell?

He then said “you ruined the surprise, I taped your engagement ring to the underside of the seat cover”.

“This is the story of my parents’ engagement as well. My dad just said, “Here.” and went off to his college basketball practice afterwards. Best part of the story is when my mom opened the box there wasn’t even a ring inside. She asked him if this was a joke. Jewelers forgot to put the ring in the box.”

“Apparently when a friend of mine and his girlfriend got engaged it was because they were arguing in a restaurant and he just said “DO YOU JUST WANT ME TO PROPOSE TO YOU?!”.

She apparently took that as an actual proposal and talked about how cute it was to other people. She was a bridezilla during the whole planning stage, they DID get married, and then she admitted that she had cheated on him with an old college boyfriend and was moved out of their apartment before they even hit the 6 month mark. And people were shocked when his best friend said that he would not give them their blessing…sounds like dude was right not to.”

“My housemate just told me about how one of her friends back home just got engaged.

My housemate comes from a *very* religious community. Like, they have their own shops, restaurants, their own college. They used to have their own high school but it got shut down for some reason.

Anyway, the friend’s fiancé proposed to her 20+ times over the course of several months. The church encouraged him to keep on harassing her, and the church shamed her into giving in. They told her that it was her “duty” as a woman to get married and have children, and that she was getting too old anyway (she’s 27!).

Eventually the friend broke down and agreed to marry him. All of her female friends, her sister and her mother are all trying to convince her not to go through with it, but she’s made up her mind.

I think they’re getting married in April.”

“Me and my sister went to watch Twilight New Moon when it first came out and when we walked into the theatre this guy and girl were up in front of the whole theatre giving a speech about how she was his lamb and he was a lion a la first twilight cringe Edward speech to Bella.

He proposed, she said yes, and they then proceeded to sit down and watch that mess of a movie. I was shook and I still feel the cringe to this day. It wasn’t even a nice theatre lmao.”

I was an emcee at a costume contest. I was told by the stage manager that a skit was performing as a entrant, and one cast member was proposing to another. The skit was some Zelda spoof. As it ended, “Link” said he had one more thing to say. He grabbed the hand of a cast member, got on one knee, and asked for her hand in marriage. Audience went “awww” but cut it short because, I suspect, they could see the woman’s face from their point of view.

“No. Just… NO!” she responded in frustration, and ran off stage crying.

The audience of about 1000 people was dead silent. Link got up, but was standing on his own cape and fell face down on the stage. His cast had already scattered backstage, and no one went to help him. He got back up, sheepishly chuckled, and limped offstage and ran past me.

Audience was still quiet. I had to get onstage and introduce the next participant and everyone pretended like nothing happened even though it was all we could think about. Normally, I made some stupid pun or joke about the previous act, but what could I say?? I still cringe so hard at this memory, I get a sinus headache just thinking about it.

Later, I found out it was one of those, “maybe I can save the relationship by proposing” blunders.