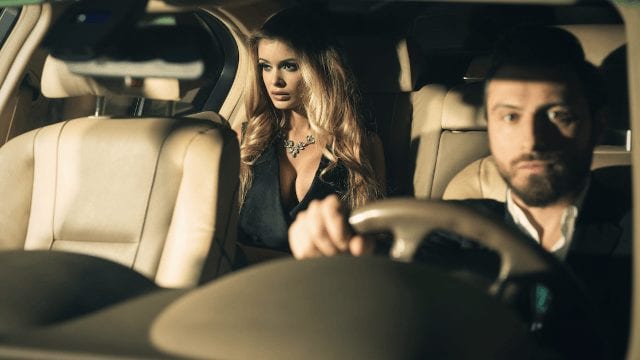 We all have our lessons to learn in life.

One of those lessons is that, when someone asks “what’s the deepest secrets you’ve overheard in your car?” the Uber drivers of Reddit will climb tf out of the woodworks and answer without hesitation.

The following are 10 of their best answers.

Never overheard a juicy secret, but plenty of interesting pax.

One time I had a group of 3 guys, probably around my age (mid 20s). They seemed nervous, avoided eye contact, and were pretty much silent from the moment they hopped in. I tried confirming the destination, asked how their night was going, etc, but only got muffled mumbling in return.

As always, I worked the situation out in my head in a calm, rational manner. Something like, “Are these guys trying to rob me? Jack my car? Did they just kill somebody? Am I an accessory to murder? Do they have knowledge of the impending apocalypse?”

But as my paranoia routine winded down, I slowly started to realize what was going on. Between the beads of sweat, occasional jaw clenching, and finally – random giggle outbursts… these kids were tripping fucking balls.

Once it hit me I called them out immediately and told them I was cool. They looked so relieved. I started blasting music (some Umphrey’s McGee I do believe) and they just started geeking out by that point. Fun ride.

At the end of the ride, the guy that sat up front tossed me a bag of shrooms. Good times.

1. Two girls taking about how they fucked the same guy. Both agreed his dick was too big and he was hurting them by lasting too long, both concluded he was gay.

2. Two middle aged couples trying to agree to a foursome.

Drove UBER one night… it was pretty tame until I picked up two guys who wanted to go to a strip club 40 miles away. As they requested an UberSelect fare I was happy to drive that far. ($80-100) It took them 15 minutes to get ready and into the car and they seemed cool so I wasn’t worried.

As soon as we got on the freeway the guy in the passenger seat started asking about UBER driving and things got dark. After a few minutes he started saying shit like “what would you do if someone just grabbed the steering wheel and ran the car into the median” and “have you ever thought about what would happen if someone in the back seat tried to strangle you while you were driving?” I got a little freaked out and tried to lighten the mood by asking what they were celebrating, etc, but the one guy just kept at it.

I was happy to get to the strip club and get them the hell out of the car. Bonus was the bouncer at the club gave me $40 for dropping them off there. I never drove UBER again. Fuck that.

Former Uber driver here. Picked a girl up a sweet girl from a bar on a Wednesday night – absolutely hammered, about 10pm. She got into my car, apologized for being so drunk and politely asked if we could just drive around a little while, with the windows down.

I was prepping for a cleaning fee, trying to drive and pull a vomit bag out of the glove box, but no, she just did that airplane thing with one hand out the backseat window. She asked me if I had ever thought about dying, to which I replied, yeah – I guess so.

That’s when she told me that she had cancer. It was in her brain and it was too far gone to consider chemo. I remember my heart just pounding. She told me she was dying and she was going to be okay. Tonight she was celebrating with her work friends who threw her a going-away party. She told them she was taking a position abroad.

“I just didn’t tell them that abroad was heaven.”

Jesus. Fucking. Christ. I turned off my app and cried my ass all the way home.

Took this 19 year old kids and what I assumed was his gf back to her house on pride weekend in SF. They made out the whole ride. When I dropped them off, only she got out. He said “Take me to Castro and 18th.” I said “Really?” and he said “Yeah, I only make out with girls when I’m rolling.” Never a dull moment in San Francisco.

(The Castro is a famously-gay area in San Francisco. “Rolling” is the term for being high on X.)

Happened to a friend of mine – He picked up these two girls, lets say Ashley and Emily, who were each other’s best friends going out to celebrate Emily’s birthday. They were supposed to be going out downtown, but once they were both in the car Emily said was not in the mood and wanted to go back home. Ashley was pissed because she was trying to do something nice for her best friend etc and the two were in a screaming match in my friends car. He ended up dropping off Ashley first and on the way home Emily explained to him that she didn’t want to go out because she is pregnant and Ashley doesn’t know.

I know this is the opposite of what you asked because I’m a passenger not a driver.

I had an Iraqi driver tell me he was an engineer in Iraq before the first gulf war and he’d developed a superior means of gilding furniture, chandeliers etc which you can imagine was hot in prewar Hussein-ville. Well Uday wanted to go into business with him but (and this is a direct quote) “First Uday wants to be your partner in business, then he wants to be partner in your wife.”

Words to live by.

Picked up 2 dudes. They were talking about how they were going to keep hiding their relationship from their wives and children. Pretty messed up stuff.

I picked up this young overly affectionate couple that spent the entire trip making out in my backseat and telling each other that they loved each other. Cute.

So I drop off the couple and head on my way to pick up my text fare. I hear a cellphone ring in my backseat, realize it’s my previous ride’s, and pick up the phone to let them know I have it and I’ll come back to drop it off. Turns out it was the guys wife phoning to check in on him while he was on a business trip, which he was thoroughly enjoying with his mistress

(Did they give you a good rating??)

Yeah, 5 stars and a tip. When I was going to drop off the phone I had planned to say, in front of him and his mistress: “your wife sounds like a lovely person.” I approached him with the phone and he handed me a 100. I was completely caught off guard so I thanked him and left…My plan totally fizzled

One time I was driving a dude for a bit of a long trip. Was gonna take around 25-30 minutes. He wasn’t hammered, but definitely a bit drunk. It was late and he must’ve been feeling a bit down, so he confided in me and asked me for some advice.

He told me he’s madly in love with his fiancé’s best friend and he couldn’t back out now. He’d been with this girl 4 years, and engaged for 1, ready to be married in a few months.

It was pretty sad to hear, because it wasn’t just your average story. It was filled with a lot of subtle emotional and mental anguish. The guy went through about 5 years of ups and downs with his girl, and found an innocent friend and comfort in the best friend. After a few years, he developed feelings and it was just downhill from there.

Felt bad for the guy because he seemed like he was truly in love with his fiancé too, although he had strong feelings for this friend. He knew that going through with the marriage meant a lifetime of being around the friend and suppressing feelings, but also breaking it off meant that he lost the girl of his dreams. Seemed like a genuinely nice guy, and I hope he’s doing okay.