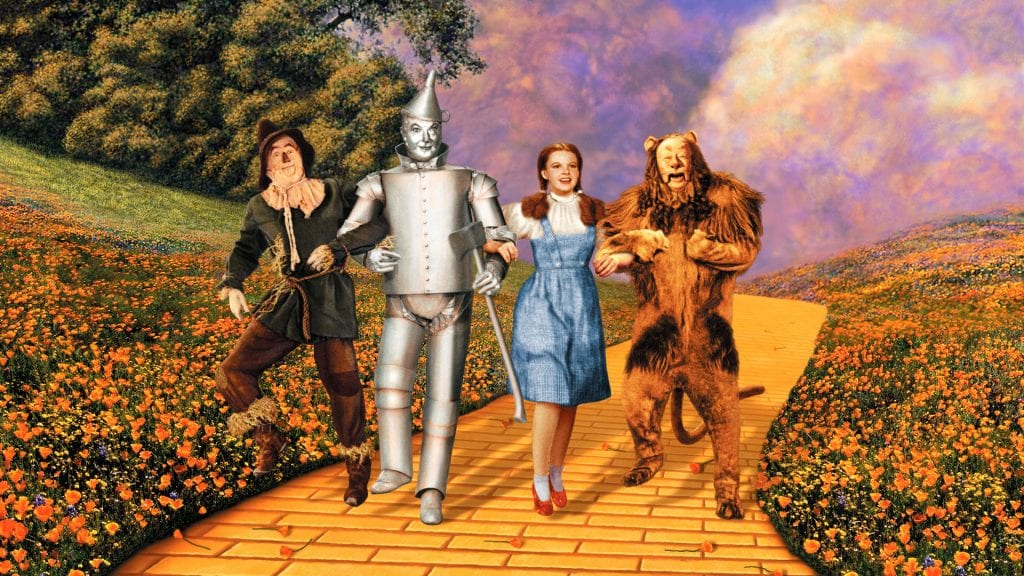 There are some movie myths that refuse to go away. In fact, some of these legends date back to the beginning of the motion picture industry in the late 19th century.

This article’s purpose is to finally put an end to some of the biggest movie myths that we’ve heard for years and years. Read on to find out about munchkins, crowds fleeing theaters, and that creepy cardboard cutout in Three Men and a Baby.

1. The munchkin in The Wizard of Oz 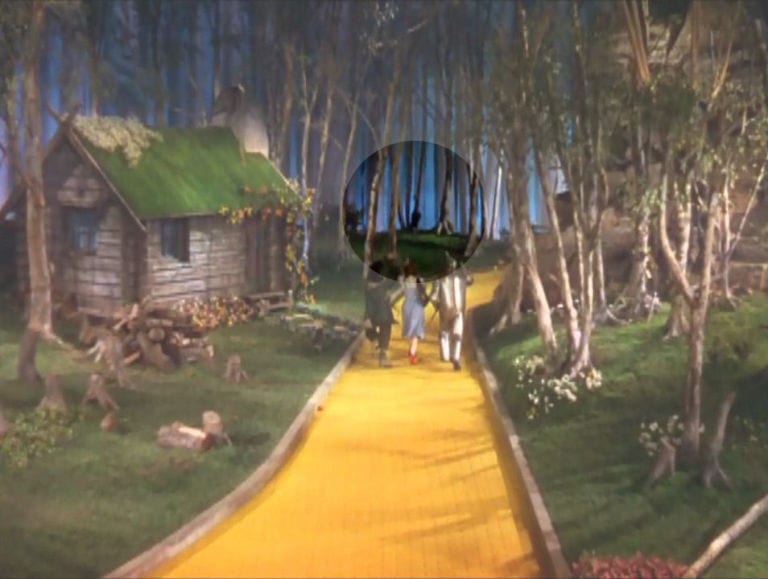 This has to be one of the most famous mysterious legends in film history. The story goes that one of the little people playing a munchkin in 1939’s The Wizard of Oz took his own life on the set by hanging himself from a tree. AND, you can see the poor guy hanging in the background of a shot where the Scarecrow, Dorothy, and the Tin Man are taking a walk down the Yellow Brick Road.

If you pause the film at the exact right moment, so they say, the evidence is clear. But, it’s not true. In fact, that scene was filmed before the munchkins were even hired and that figure in the background is actually a pelican. Apparently, there were some birds on the set and this one decided it was ready for a close-up. 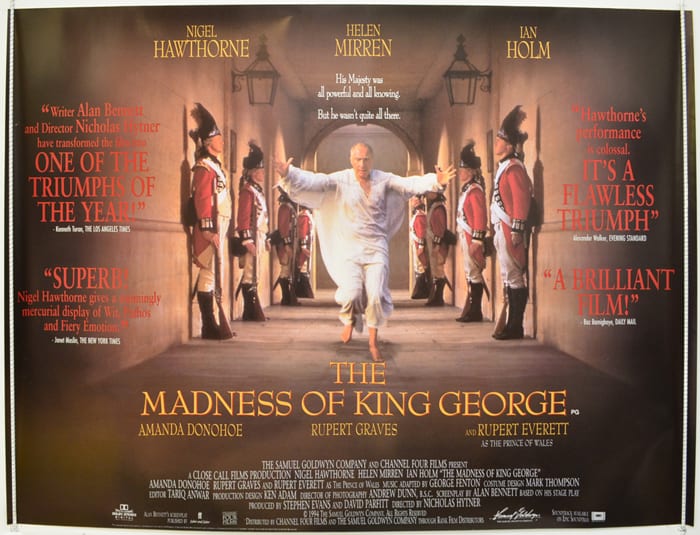 The rumor about this 1994 film is that the title of the film was changed from The Madness of George III (the name of the play that the film is based on) to The Madness of King George so Americans wouldn’t be confused and think they missed the first two films…this is prime time for an eye roll.

In fact, the film was released as The Madness of King George all over the world, so us dumb Americans weren’t the culprit of this one. BUT, director Nicholas Hytner apparently was a bit concerned that Americans wouldn’t know George was a king, so that word was specifically added. 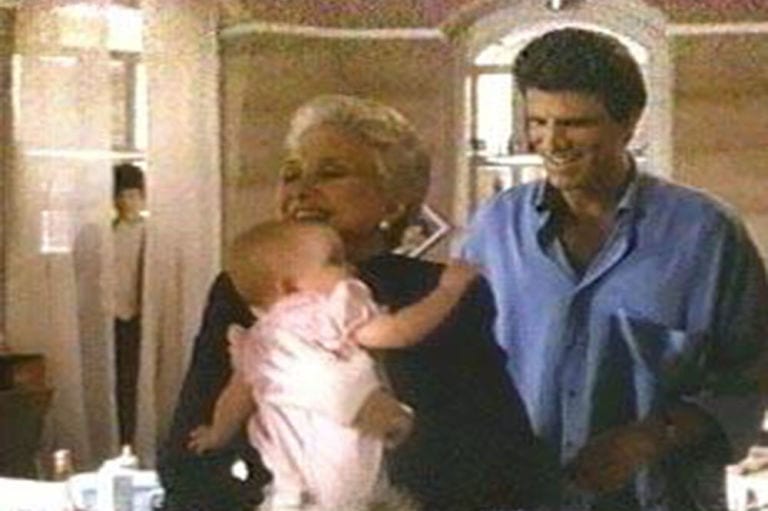 This rumor ran rampant when I was in middle school. “Did you see the ghost of the kid in the background of Three Men and a Baby?!?!” Nooooooo!

You can see from the photo above how this story got started. The myth was that a young boy who had ended his life with a shotgun haunted the apartment and the set of the film. Of course, we know now that isn’t the case. There was a storyline involving Ted Danson’s character that was mostly cut from the film about a dog food commercial that Danson was working on. That “ghost” in the background is a promotional cardboard cutout for the commercial. 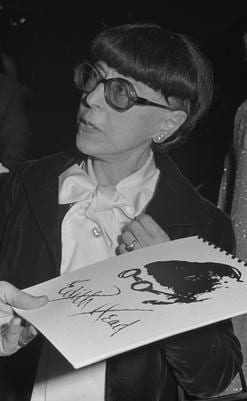 Do you see a resemblance here? 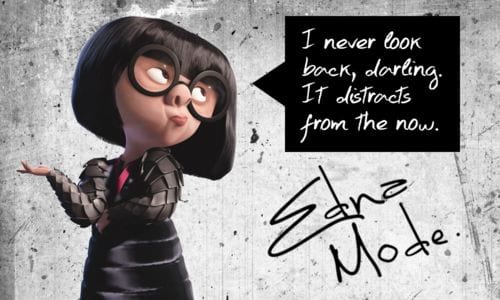 The character of Edna ‘E’ Mode in The Incredibles is rumored to have been based on legendary Hollywood costume designer Edith Head. It just seems obvious, right? They’re both designers, they look alike, their names are similar, and they both had high opinions of themselves.

But then the film’s director, Brad Bird, had to ruin all the fun. 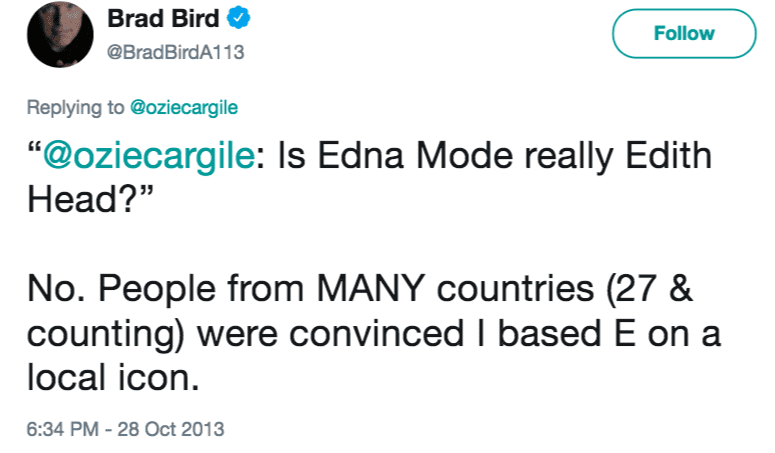 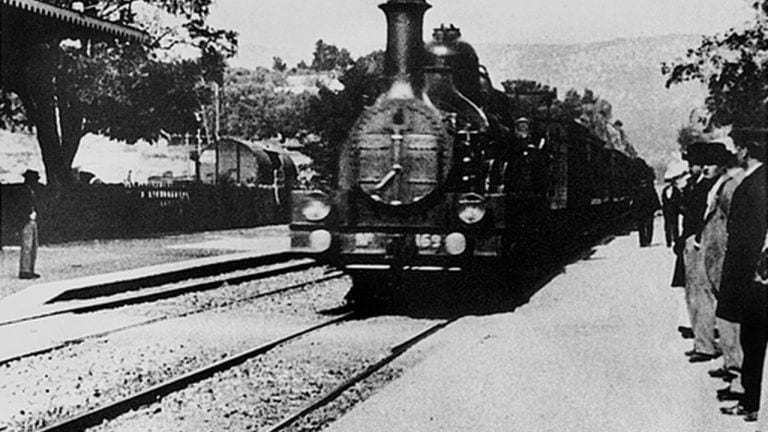 This story is a mythical piece of film lore. Unfortunately, it’s also an urban legend. In 1895, a theater in Paris showed a grainy black and white film, called L’Arrivée d’un Train en Gare de la Ciotat, that showed a train pulling into a station. Audiences had never seen film footage like this and it caused quite a reaction.

But the myth that has grown over time says that audiences ran screaming for their lives from the theater because they were so frightened and they thought the train was going to burst through the screen and mow them down. FALSE.

6. Brandon Lee and The Crow 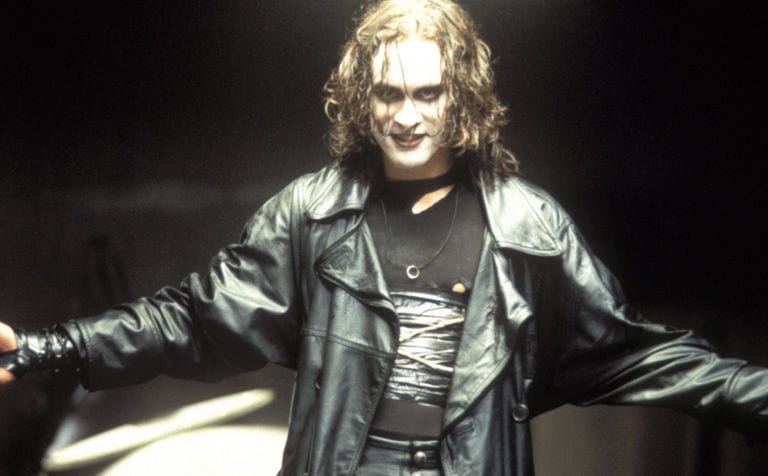 Brandon Lee tragically passed away in 1993 while filming The Crow after he was accidentally shot with a prop gun. The legend behind this story is that footage of his demise ended up in the final cut of the film when it was released.

People involved in the film said that was absolutely not the case, and that the film footage was turned over to police and was later destroyed. 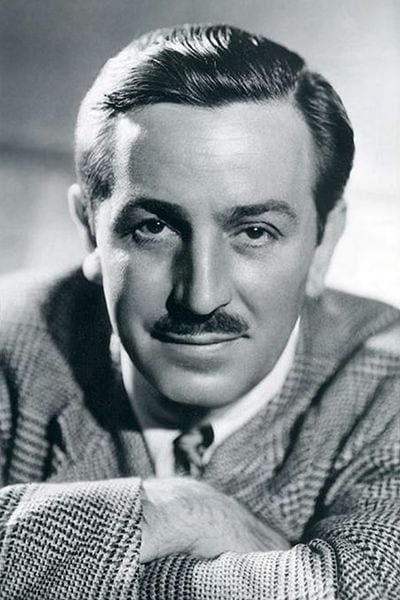 This story is not about a specific movie, but about the man behind a movie empire. Rumor has it that none other than Walt Disney himself (specifically, his head) is cryogenically frozen beneath Disneyland. Sorry to burst your bubble (because the story sounds cool) but Mr. Disney will not be returning anytime soon. He was cremated and his ashes are interred in a cemetery in Glendale, California. 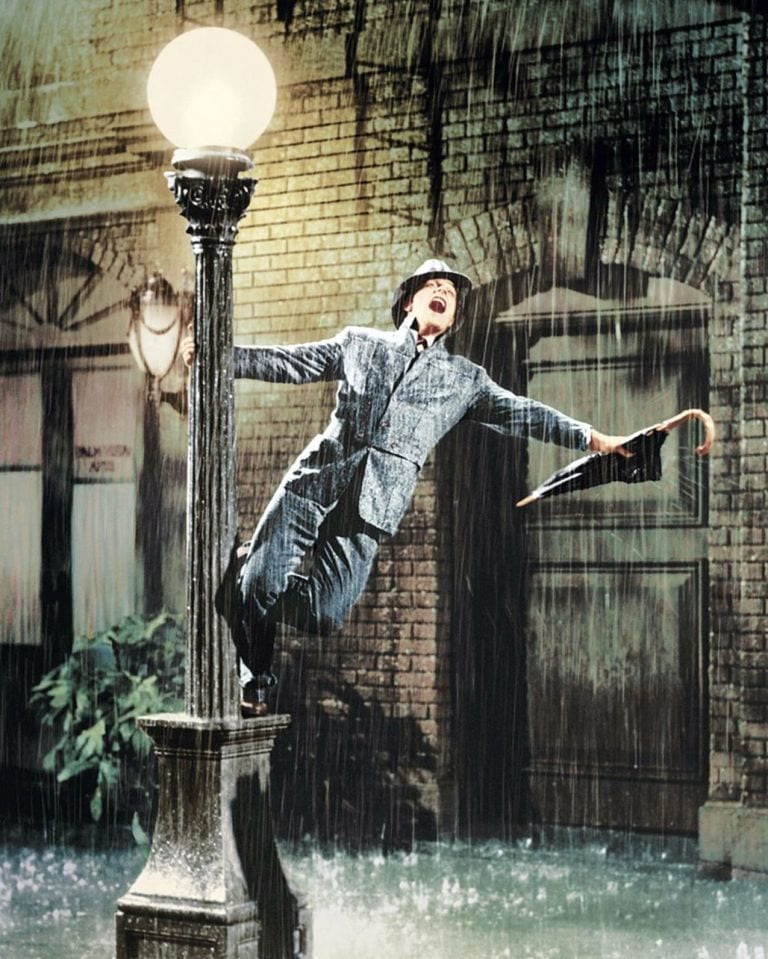 This one is pretty bizarre. The story has persisted that to make the rain show up better on camera in 1952’s Singin’ in the Rain, the crew rained milk from the sky. Well, that sounds absolutely disgusting. And it’s also not true.

The film’s director, Stanley Donen, said, “There have been a lot of stories about how we put milk in the water so you could see the rain. It’s not true.” 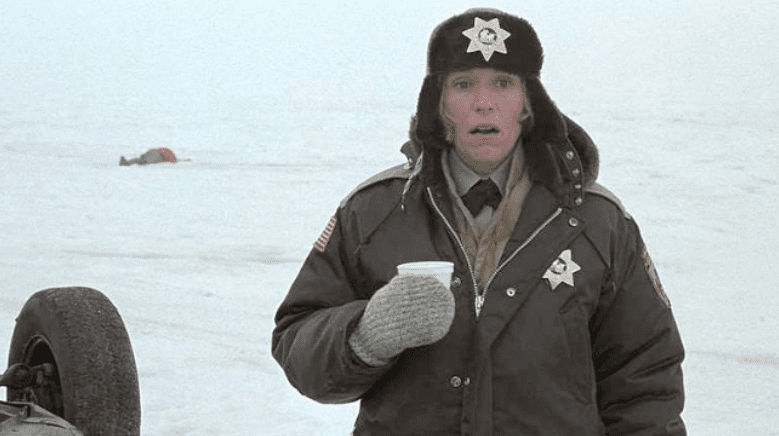 Another strange story that actually comes with a sliver of truth to it. The myth is that a Japanese woman passed away while trying to find the missing money from the movie Fargo (which is not a true story).

That part is not true, but was born out of a real story about a Japanese woman named Takako Konishi who took her own life in a snowdrift in Minnesota after losing her job in Tokyo. People thought the story sounded like a Coen Brothers movie, and a myth was created.

The famous MGM lion has been rumored to have ripped two burglars to shreds while none other than Alfred Hitchcock was trying to film him inside the MGM logo.

Sounds cool, but it’s total BS. There have been 7 MGM lions, Hitchcock never had anything to do with it, and no one ever got ripped to shreds…oh well.

11. The chariot race in Ben-Hur 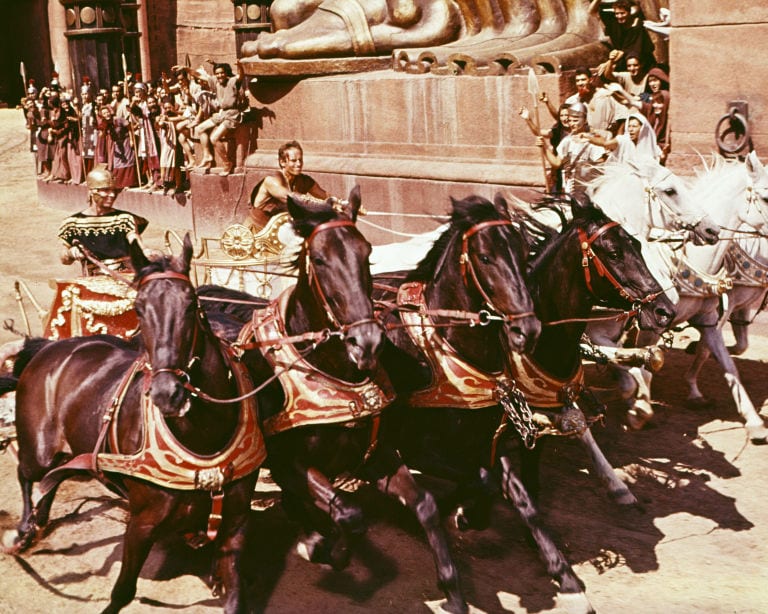 Charlton Heston’s chariot race in the 1959 version of Ben-Hur is one of the most famous scenes in film history. There’s also a myth about it that persists today. The tall tale says that a stuntman passed away during the filming of the race.

That didn’t happen, but the rumors are probably linked to the 1925 version of the film. When that film was in production, a stuntman passed away from injuries sustained during the chariot race.