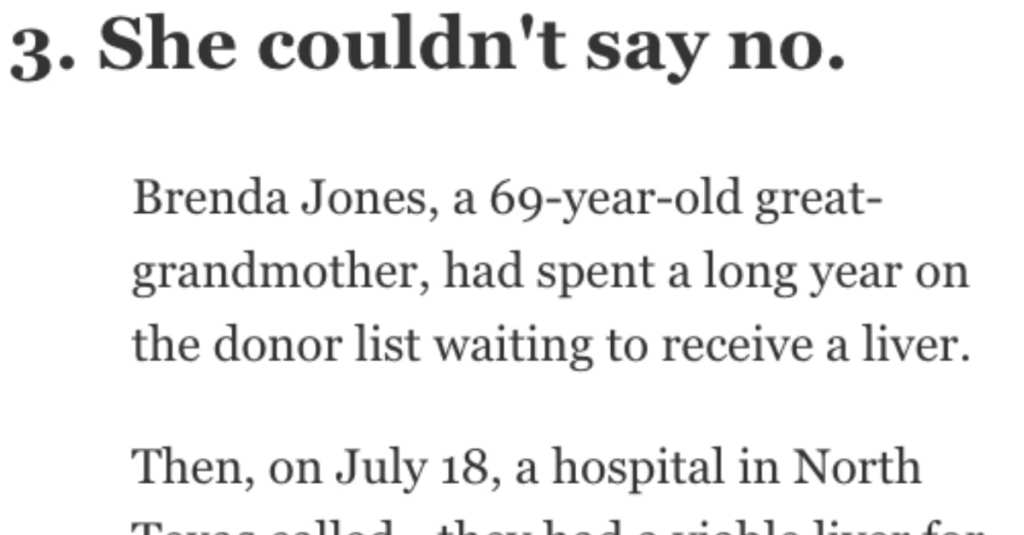 There is such a focus these days on the bad things, the bad people, the big, scary future that only some of us will ever get to see. I think that’s why so many of us go out of our way to find the good news, and the stories about people who are doing good in this world, instead of the opposite.

These 11 stories definitely fit the bill – they’re tales about people being generous because it’s the right thing to do, not because they have to, and they will surely put a smile on your face.

11. That can turn someone’s month around.

“Unbelievable gesture like this stays deep inside your heart and gives us extra motivation to GO ON,” the restaurant’s owner, Steve Riad, wrote. “On behalf of Tomo family, I want to thank you ALL who’s been there for us the last two months, giving us all those kind words, generosity, online posts, and supports. It means more than you know.”

“My mother just called me. She had ordered some flowers from a small local store, to be delivered and dropped on the porch. When they brought the flowers, they said, ‘Hang on, we have something for you.’ The driver went back to the truck and proceeded to bring out a bag of hot meals, and then MULTIPLE bags of groceries.

My mom was speechless and asked why. They said, ‘When you called, you mentioned you had promised your daughter not to go out, so we were worried you had no food and brought some.’ My parents have plenty of food. I’ve set up weekly deliveries. But this small business wanted to make sure. And they refused—REFUSED—payment for it.

So I would like to shout out this business to the rooftops: Castle’s Garden, Lawn, & Landscape.” One thing about coronavirus: there have been a shortage of toilet paper, but there absolutely wasn’t any shortage of kindness.”

12-year-old Mathew Flores from Sandy, Utah, approached postal worker Ron Lynch and asked if he had any extra advertisements or random newsletters. The boy explained that he loved to read but couldn’t afford books or even the bus fare to the library, so he would take anything the mailman had. Lynch was floored.

“He didn’t want electronics; he didn’t want to sit in front of the TV playing games all day. The kid just wanted to read,” Lynch told Deseret News. Lynch asked his Facebook friends for reading material. Soon, Flores was getting books from all over the world—the United States, England, and even India.

For his part, Flores said that he plans to read all the books, then share them with other book-starved kids.

8. He was already out delivering…

Greg Dailey was keeping up with his regular paper route in central New Jersey when an elderly customer stopped him. She’d been having some trouble getting to the bottom of her driveway each morning for the paper, and if he could, would Greg mind pulling up to her garage and throwing it a bit closer to her house? He obliged, of course. And if this customer was having trouble getting to the sidewalk for her paper, Greg realized, how was she getting her essentials under quarantine conditions?

The next day, Greg included a note in each newspaper on his route: “My name is Greg Dailey and I deliver your newspaper every morning. I would like to offer my services—free of charge—to anyone who needs groceries.”

Since, Greg has carefully placed groceries and the morning paper, on the doorsteps of over 100 elderly citizens on his route.

7. Someone is cutting onions here.

When police found Fred Barley, 19, living in a tent on the campus of Gordon State College in Barnesville, Georgia, they were prepared to evict him. Then they heard his story. Barley had ridden six hours from Conyers, Georgia, on his little brother’s bike, carrying all his possessions—a duffel bag, a tent, two gallons of water, and a box of cereal—in order to enroll for his second semester at the school as a biology major.

He’d arrived early to look for a job, but no luck. “I’m like, ‘Man, this is crazy,’” Officer Richard Carreker told ABC New York. Moved by Barley’s plight, Carreker and his partner put Barley up at a motel on their own dime. Word spread, and soon people donated clothes, school supplies, funds to cover the rest of his motel stay—he was even given a job at a pizzeria.

And then there was Casey Blaney of Barnesville, who started a GoFundMe page for Barley after spending time with him. “I thought, Geez, this kid just rode a 20-inch little boy’s bike six hours in 100-degree weather. He’s determined,” she wrote on her Facebook page. The fund reached $184,000, all of which is going into an educational trust for Barley.

“Yesterday, my neighbour left me some homemade soup to pick up from outside; while I am recovering from a mild case of COVID-19. When I got there, I found not only a big container of piping hot soup, but two huge bags of shopping.

I almost burst into tears. She barely knows me.” The kindness of strangers never fails to amaze.

5. Even strangers will come through.

For 34 years, LouAnn Alexander worked as a flight attendant. But at the age of 58, she received a diagnosis of pancreatic cancer. Soon, the vivacious mother of two and grandmother-to-be was making plans for hospice care.

Her older brother Rex Ridenoure was flying to see Alexander when he asked the flight attendant—an old colleague of Alexander’s, as it turned out—if he could speak to the passengers. He talked about his sister, even passed his phone around the plane so they could see photos of her. He then handed out napkins and asked if they’d write a little something for Alexander.

Ninety-six passengers responded. Some drew pictures. One man and his seatmate created flowers out of napkins and swizzle sticks. But mostly, there were warm words: “Your brother made me love you, and I don’t even know you.” And “My favorite quote from when I had two brain tumors: ‘You’re braver than you believe, stronger than you seem, and smarter than you think.’”

Alexander died in April 2016, but Ridenoure never forgot the compassion shown that day. “I’m just amazed that given the opportunity, even total strangers will reach out and show a lot of empathy and concern,” he said. – The Arizona Republic

4. There are good people everywhere.

“On his way home from work, [my son-in-law] stopped at BJ’s for coronavirus essentials, waited for a cart, and fought his way through the many, many desperate shoppers only to find a line wrapped around the store. After purchasing his items, as he was going to his car, a woman asked him if the store still had water.

As usual, Ken being the social butterfly he is, got to talking to her and came to find out she had just come from visiting her son who has cancer at the Children’s Hospital of Pennsylvania. He didn’t want her to have to wait all that time just for water, so he gave her all the water in his cart!

Brenda Jones, a 69-year-old great-grandmother, had spent a long year on the donor list waiting to receive a liver.

Then, on July 18, a hospital in North Texas called—they had a viable liver for her. Meanwhile, 23-year-old Abigail Flores also needed a liver.

Her situation was more urgent than Jones’s. Without a transplant, doctors feared Flores had maybe one more day to live. So they asked Jones to give up her spot so that Flores could get the precious organ. Jones agreed. “In my heart, I wouldn’t have been able to live with the liver if I had let this little girl die,” she told WFAA.

Jones was placed back at the top of the donor list and got a new liver days later. Jones and Flores remain a prime example of a life changed forever by the power of generosity. – WFAA

In response, author Ijeoma Oluo set up a GoFundMe to help bridge the gap for artists who’d lost their livelihood.

In August 2016, Cari and Lauri Ryding came home to find their rainbow flag had been stolen and their house egged. Anti-homosexual vandalism wasn’t at all what they expected in their close-knit Natick, Massachusetts, neighborhood.

As it turned out, it also wasn’t what their neighbors expected. “We said, ‘Why don’t we all have the flags? They can’t take them from all of us,’” Denis Gaughan told the Boston Globe. Within days, the rainbow flag—the symbol of gay pride—was flying in solidarity with the Rydings on over 40 other homes in this family-friendly area.

“One person’s act of fear and maliciousness created such a powerful statement of love,” said Lauri. “Love wins. We win.”

I honestly could read these all day.

What’s your favorite feel-good story? Share it with us in the comments!