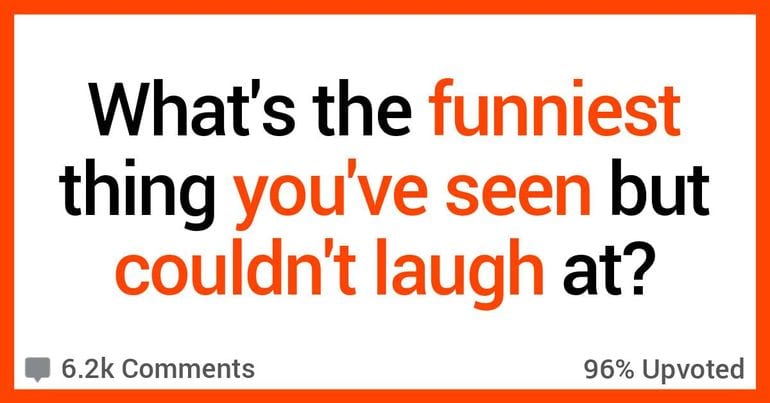 11 Times People Had to Try So Hard Not to Laugh

Laughter is the best medicine and all of that, but most of us who understand social cues and the like get that there are times when laughter just isn’t the right response for the moment.

Which doesn’t mean that our fickle brains and twisted senses of humor don’t want to make us laugh, and hence the struggle ensues – one we win sometimes, and lose sometimes, but at least we live to fight another day.

These 11 things aren’t happening to you, though, so feel free to crack up at will.

Watched a kid knock himself out with a rifle butt.

Background: High school JROTC. One of the drill team cadets was trying to learn a spin trick with an M-1 Garand. He got it once, shouted, “Hey, watch this!” And spun it again. Clocked himself in the temple and it was lights out.

I couldn’t laugh because I was the most senior cadet on deck, and had to take care of his sorry ass.

It was a small art gallery opening. The lady who owned it was a friend of my mothers so we were invited (my mother, me (~16yo) and my brother) to come to the very fancy “high culture” festivities.

She had arranged some light entertainment in the form of a interpretive dancer… This podgy middle aged lady in flowy fabrics with a scarf was flying around the small lawn, waving her scarf and arms about randomly and occasionally rolling about on the ground. I think it was accompanied by enya music.

I could barely breathe and had to bit my tongue super hard and absolutely make sure I did not look at my mother or brother or we would have all died of laughter.

In boot camp the drill instructors are constantly trying to get you to break your bearing; get you to show emotion or like you’re being affected by what’s going on around you.

Turns out one of the best ways to do this is to be violently funny people who constantly pepper the most creative insults into their tirades, and occasionally they venture into pure lunacy.

So during range week, when we were in the pits pulling targets, one of the recruits was f*cking around, not taking things very seriously, so our heavy informed him that if he wasn’t going to be serious, he was going to skip up and down the line of targets, shouting a very specific phrase- ‘Fire the candy cannons! Coat the town with marshmallows!’

Said recruit was, predictably, not very enthusiastic about being forced to do this, and he half-heartedly mumbled while he was moving down the line.

Our heavy was displeased with this performance, and exhorted him to improve thusly: “No! With feeling! Like this! Fire the candy cannons, coat the town with marshmallows!”, with such a savage mocking of the fake British accent a lot of theater kids pick up that it almost had to be informed by personal experience.

I was once at a food and drink event that was put on by a very famous and eccentric German chef. When it was over he invited my friend and I back to his farm for an after party. His farm famously hosts chefs from all over the world who live with him and learn from him, so as a young chef this was a huge honour.

My friend and I had had quite a few cocktails and when it was time for the famous chef to give us directions he started drawing a map with all kinds of windy dirt roads. He kept saying “and this road is windy windy windy…windy windy windy” in his thick German accent while scribbling all over the page, and it just kept going to the point that my friend and I were visibly holding back tears of laughter.

We ended up having an amazing time at the farm but I’m 100% positive the chef did not like us at all after we laughed in his face while he tried to give us directions.

7. A friendship down in flames.

I went to a holy rollers church with my friend in middle school. (I had no idea her church would be like this) She had an emotional breakdown at the end of mass and we went to the bathrooms so she could cry, then we started walking back into the worship center where her mom (big woman) was, and some other people were still praying.

I hear someone shouting, which wasn’t hard to find at this church, as we get closer to the front and it’s her mom, speaking in tongues. It fr sounded like a Harry potter spell chanted over and over again

Her hands were flailing in the air and she eventually fell over to her right side and crushed a skinny guy next to her. I had to stifle my laughter so bad I almost peed.

Later i told my friend that i was sorry her mom fell over in church and she said, “she didn’t fall, she was pushed” I was confused bc I KNOW I saw her fall. She looked me dead in the face and said “she was pushed by the holy spirit.”

We were 16 and a friend’s birthday party. 4 in the morning the 8 of us decide to go to the nearby elementary school to run around the roof. Two of the boys tipped over a portopotty. On the walk home the cops roll up and make us return to the school to make sure we didn’t do any more damage.

As we were walking into the front gate one of the officers had climbed over a fence to look around. As he was climbing back over his night stick got caught in the fence and he fell on his ass next to all of us.

I’m surprised no one but through their lip trying not to laugh. As an added bonus my friend’s mom was so pissed at us when she picked us up from the school that she wasn’t paying attention and backed up into one of the cop cars.

Rescued a car crash survivor. His land-rover left the road and careened down a very steep hill. Driver was ejected some 30m from the road and the car rolled another 80m. Lucky dude. Would definitely have died if he stayed in the car.

Anyway. We get to him lying there on the hillside. Thick bush and loose rocks everywhere. Beautiful sea view too, I might add. He’s unconscious, some serious scrapes and bruises. And a head injury. Serious but otherwise stable condition.

As we were strapping him into the rescue basket for winching out, I straighten his shirt. In bold lime green letters is written “I look sexier when I’m in the bush.”

Me and my colleagues didn’t laugh I’m proud to say. Closest thing to it was when I showed the winch operator the shirt, he simply said “that’s f*cking funny.”

It was f*cking funny.

4. I wouldn’t have been able to manage.

My step Dad was an Italian from Manhattan. He had the classic Italian mobster accent. We all live in Minnesota, born and raised. So his accent was definitely different from what we’re used to.

My brother loved to playfully make fun of him by imitating him by saying classic Italian mobster exclamations along with the hand mannerisms. Stepdad was a laid back guy and found it funny and the banter between those two was very light hearted.

So, one day, we were having a small get together at our house with my mom, stepdad, my brother and a few friends. We were all hanging out outside when my 4 year old daughter excited started saying “Uncle Pauly, Uncle Pauly! Watch this!”

As everyone watched, she went over to a peice of dog poop, pointed at it by shaking her open palmed hands, and exclaimed in the most perfect Italian Mobster accent “What the f*ck is thiiiis?!” She even did the head bob perfectly.

We all stifled laughter.

3. He was trying to make people laugh.

I had a high school teacher who was a very moody and sarcastic person. One day, he took a full size poster board, took a black sharpie, and wrote TICKING TIME BOMB, then hung it around his neck

He wore it all day. No one was supposed to laugh cuz that could set off the bomb. Also, in his class one day, he asked a question in class.

One of the big jocks hurriedly answered by saying Well, I read that blah blah. This teacher looked at him and said YOU READ?

Not me but a teacher I had in high school. Very serious man, he wasn’t mean but kept things orderly. I don’t even recall what they said but one of the students told a very dirty joke in the class.

The teacher calmly stands up from his desk, walks out the classroom door, shuts it, and we hear him just belly laughing the hallway. He collects himself, walks back in, sits back down, and continues class like nothing happened

My stepdaughter was learning to read and at the grocery store she commented that chicken the food and chicken the animal were spelled the same, isn’t that funny?

Told her that this is because they are the same thing, chicken (food) was dead chicken (animal).

Her mom was furious at me because her daughter didn’t want to eat chicken after learning that… For about half a day.

I can’t decide if I’m looking forward to or dreading the next time this happens to me.

Tell us your best “couldn’t laugh” story down in the comments!