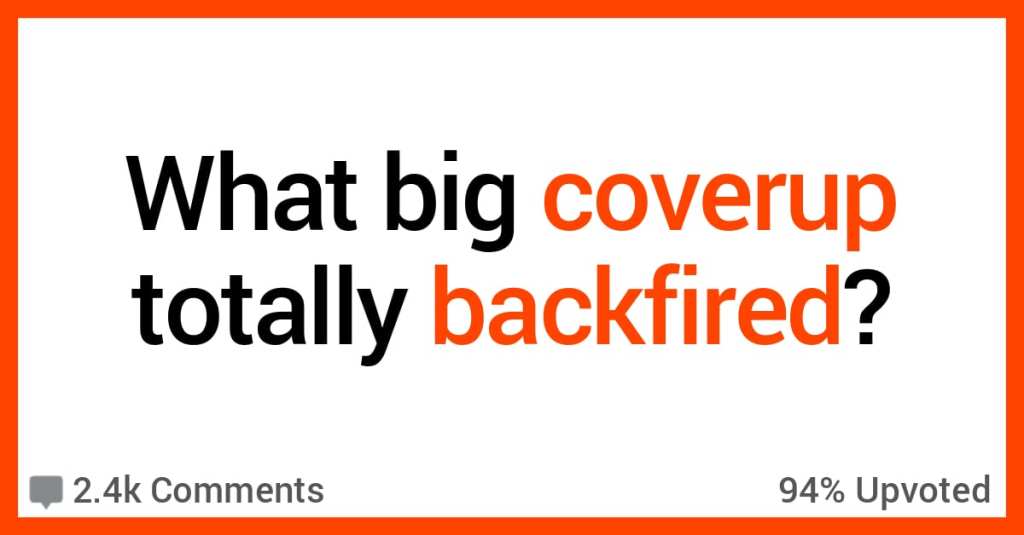 When something truly awful happens – on purpose, an accident, whatever – that hurts or has the potential to hurt people, the best thing is to own up to it immediately so that the fallout can be mitigated as quickly as possible.

Now, that might be the truth (and common sense) but for a lot of people, trying to cover up a huge bungle is just a knee-jerk reaction – and here are 11 times that people definitely should have just owned up to the mistake from the get-go.

Anything Japan did in WW2, now Japan just denies everything, but they tried. Unit 731 isn’t communist propaganda anymore. John Rabe was an angel of a Nazi.

Same thing happened with the Armenian genocide, an alarming number of genocides really.

Opened the floodgates for not just criticism of his leadership, but it removed the ability for him to retaliate against the people’s he’s sexually harassed.

He’s gone from a liberal hero to a pariah in a few weeks.

The U S Army trying to cover up the cause of death for SSG. Ryan Maseth, they tried to say it was a suicide until Ryan’s mother got it investigated and it came out that the cause was a ungrounded water pump that had been signed off by two American electricians working for KBR in Iraq.

Ryan’s mother tried to sue and it went up to the supreme court where they ruled they could not allow KBR to be sued because they were to vital to national defense. At least the truth was told.

8. The answer is almost always to ignore it.

Tons of memes here but does anyone member the Beyonce photo that her manager demanded be taken down?

Beyoncé had a kind of unflattering picture of her taken from her Super Bowl performance and she looked like she was deadlifting a heavy weight or taking a huge dump and her manager tried to get it removed from the internet and instead it backfired and became a huge meme.

It was in no way a major cover-up but At my school one of the teachers got caught drunk driving but for some reason the school just called everybody he was sick and would not be at school for a couple days.

Of course what they did not realize what is that the officer who arrested him had a kid who went to our school and by the end of the day literally everybody was talking about it and even the gave him crap for it after he came back.

In 1974, Karen Silkwood was found dead, as a result of a car crash. Silkwood was a chemical technician and labor union activist who was about the reveal the safety hazards.

Despite drugs found on the scene, the police and coroner didn’t believe the drug claim and went looking for other likely others. After being informed about death threats from her family, the Atomic Energy Commission, and the State Medical Examiner found radioactive contamination in her body.

This prompted an investigation at Kerr-McGee, the company Silkwood was talking about, which reveal the very problems that were about to going to be exposed to the media. Kerr-McGee had to pay up for what was done as they were held liable.

Check out what’s been happening in the Australian Parliament House….

Multiple members of staff wanked over a female MPs desk, recorded it and shared it around with each other

Just some of the action that came from the AG trying to cover-up an historical r*pe.

Oh! And the thousands of women who marched for justice at parliament house and were told that the PM would only talk to a small delegation if they went into parliament house…which they obviously were not keen to be doing.

As of right now, the Epstein cover up seems pretty successful due to the lack of indictments and convictions considering the alleged scope. I get that JE was convicted and Jizlane is in jail, but the amount of people alleged to be involved that are still on cable news networks, holding public office, etc. makes it seem to me as being pretty successful. Hopefully that changes!

I think the whole “fappening” kerfuffle was made much worse by all the media coverage and celeb statements. The nudes would still have been seen by lots of people, but I’d say 10x more people saw them simply because of the people going online saying “DON’T LOOK AT THIS!”.

Forbidding someone from doing something. That famously efficacious method of getting them to not do the thing. With its long track record of successes, including Prohibition, the War on Drugs, Abstinence-Only Sex Ed, and deleting any mention of Aimee Challenor.

Whatever it was Saudi Arabia tried when they murdered an American journalist in their Turkish Embassy, only for the Turkish government to call them out on it when they tried lying about it.

I had literally never heard of Jamal Khashoggi in my life until the Saudi leader decided to have him killed.

Assassinating a journalist on foreign soil was a much bigger hit to their reputation than any articles Khashoggi had written so it really was just tremendously stupid.

The response to Covid 19. PBS has a nice retrospective doc on youtube detailing the evidence that the chinese government knew that had a new SARS-like virus among the public, and all of the lengths they took to forbid any information being shared about it, mostly because they didn’t want to cause any public panic.

Can you think of another bungled cover up that belongs on this list? Share it in the comments!