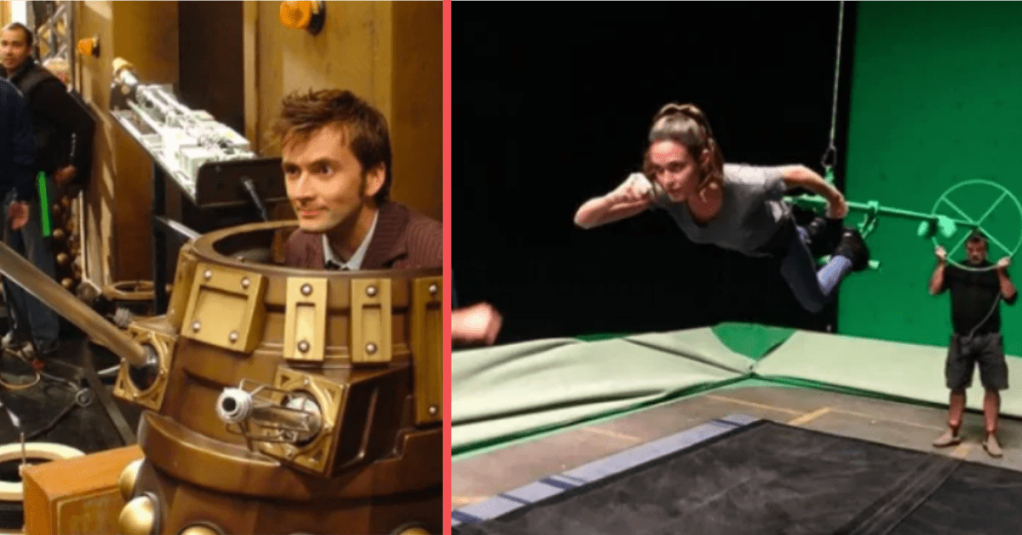 Ever watched a scene from a blockbuster film and said to yourself, “Wow, that looks expensive!” As it turns out, you’re likely right, but sometimes a little extra creativity can go a long way and also be easy on the budget.

What actually happens on Hollywood sets is totally different from what we’ve been led to imagine.

Here are 12 revealing behind-the-scenes photos that show just how far filmmakers will go to get that perfect effect.

Here’s a cheeky shot of David Tennant hiding out in a Dalek on the set of Doctor Who.

2. The not so glamorous life

It go so cold while shooting for Little Women that Emma Watson had to stock up on heating pads – and even had a few of them tucked away in her costume.

3. For those bad hair days

This is just one small step that Henry Cavill has to go through while prepping for his role in The Witcher.

Here’s an entire pack of unmasked Judoons (from Doctor Who) taking a break in between shots.

5. Check out those aerodynamics

This photo of Odette Annable as Supergirl sure explains a lot about how superheroes look so graceful while flying onscreen.

Alicia Vikander did a lot of her own stunts in Tomb Raider, which just proves how much of a bad*ss she really is.

Charlize Theron momentarily got a chance to experience life as a mouth-breather on the set of Bombshell.

Designers on the set of Downsizing actually created this gigantic legal document for Matt Damon to sign.

Who knew it took this many people to help suit up Chris Hemsworth in the Thor fat suit?

Tim Burton’s Alice in Wonderland might’ve had some insane special effects, but the actual set during filming was pretty mundane.

This is what Nebula’s face looks like at the end of the day… This accurately represents the 2020 mood.

Hollywood stars and celebrities: as it turns out, (barring all the millions of dollars, international fame, and glory) they’re just like us! Looks like creating a big-budget film is not as glamorous as the folks in Tinsel Town might want you to think.

What are some of your favorite behind-the-scenes photos? Share them in the comments!