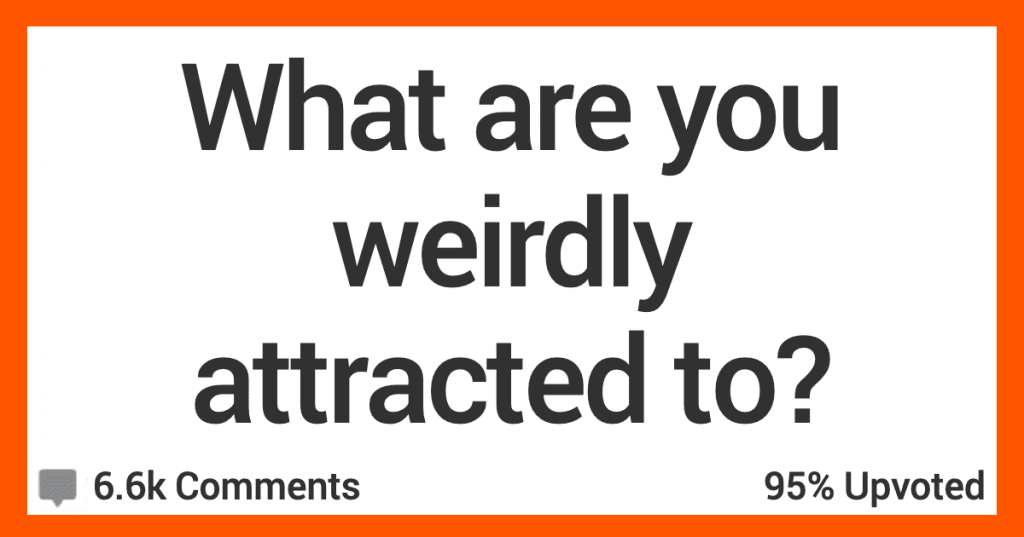 This is my time to shine…

Because I’ve always been attracted to certain things that most people aren’t usually into.

But whatever the case, we’re all weirdly attracted to different things!

And here’s what AskReddit users had to say about this.

“There is always this one woman on my bus in the morning.

Comfortable clothing, no make up, glasses, always reading a book and probably nearly twice my age. (40s I would guess) I sometimes just can not stop looking at her.

I never had this with another person.”

It’s only weird because he is 40 years older than me.”

I am, for some reason, very attracted to big noses.”

“The smell of tar when new road are being laid out on the street.

Something about this smell that I had always enjoyed smelling.

Maybe we if I was around this smell more often, then perhaps I would not liked it so much.”

But yeah Matthew Lillard in the original Scream made me realize being into guys wasn’t just a phase.

And it turns out he’s a pretty nice guy as well from what I’ve seen on the internet.”

I’ve been trying to come to terms with it or figure it out but I think I should just accept it. I think part of it is his voice and that he seems like a genuinely kind person.”

“There’s a green grocer in my neighborhood. A woman in her late fifties runs it with her husband. She has an elegance that is difficult to put into words.

Beyond her elegance is a tranquility that permeates the space around her. I know she’s caught me stealing glances as I pick apples and oranges from the produce carts. It doesn’t seem to bother her.

We lock gazes every so often. Every time I go I feel nervous and expectant. If she wasn’t married, I think I’d try to get to really know her.”

8. Leave your clothes on.

“Women with clothes on turns me on more than clothes off.

I don’t get how that works but its just better to me.”

“Ursula from The Little Mermaid.

I have a thing for big girls but even that one has me surprised.”

I’m under 40 and she’s almost 75 but yeah, there’s just an attraction on my part that I can’t quite explain.”

“When a woman is super passionate about a particular cause/subject.

What are you weirdly attracted to?