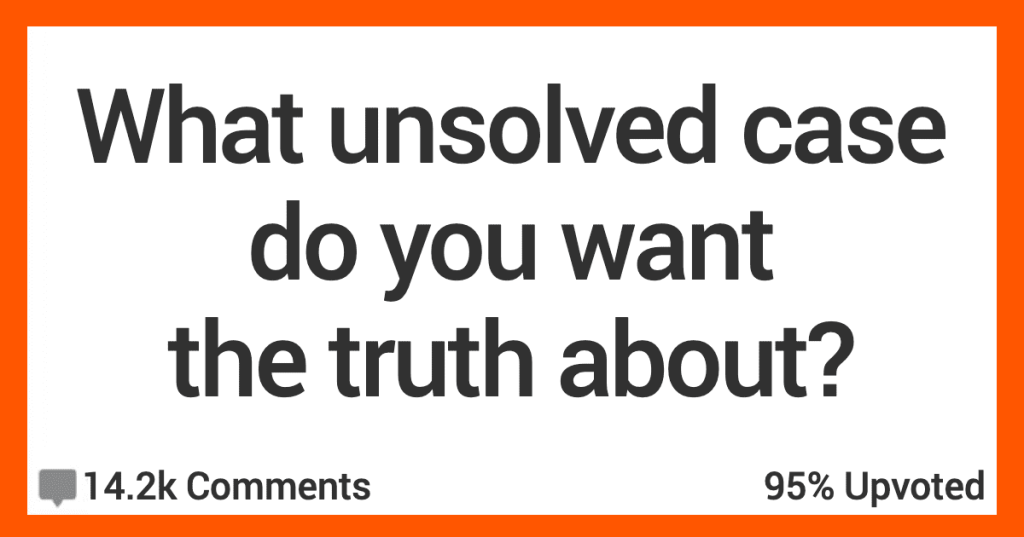 Oh, man, this is gonna be fun!

Because if there’s something that really gets me excited, it’s unsolved crimes.

And today we’re gonna hear from AskReddit users about the cases they’d like to see solved if they could.

Check out what they had to say!

Kyron was the same age as my son when he disappeared, and it’s a case that has haunted this area of the Pacific Northwest for far too long now.

It absolutely needs some closure.”

That MI6 guy who was found d**d inside a padlocked suitcase.

His d**th was ruled as a self inflicted accident and then later some former KGB guy would claim the KGB k**led him after failing to convert him to a double agent.”

“Two boys I went to school with were k**led in a hit and run by the side of the road while walking home from a party.

According to some reports, only one of the boys d**d from being hit by a car and the other appeared to have been beaten to d**th.

It’s been 20 years and no one has ever confessed or offered any information about the case.”

I still believe the Zodiac was more than one person.

Maybe Arthur Leigh Allen started it, had a network, or because it went viral so quickly, others jumped on it and became copycats, but the OG Zodiac K**ler didn’t mind, as it put the police on the wrong track.”

9-year-old girl left her house in the middle of the night, while it was storming and cold, with a pre packed bag of clothes. She had no reason to run away, and had limited computer access.

A truck driver said they saw her walking that same early morning on the dark next to the highway, and that she ran into the woods. Over a year later, her backpack was found wrapped in a plastic bag about 26 miles away, which didn’t yield any further developments.

Why did she leave? Why did she run from the trucker? How did her backpack end up so far away? Is she still alive? Was she met with foul play?”

“Where is Shelly Miscavige?

Personally I think she’s been long d**d and that her husband k**led her. But gosh it’s frustrating that we don’t know for sure.”

“The men who escaped from Alcatraz.

I doubt it, but I would love to find out they lived the rest of their days in Mexico or South America.”

The fact these kids were k**led while others were in the house is the most befuddling to me. It makes me think of the Wonderland M**ders, where someone who wasn’t targeted was k**led just for being there…but the kids in Idaho weren’t.

“If you’re from Mexico, the Ayotzinapa case where 43 students were taken and m**dered.

There has never been an official statement from the Mexican government, but it’s suspected that the government and the militia were involved in the kidnappings.

There’s a documentary on Netflix if someone it’s interested.”

There is a recording of her in the vehicle with the man who likely k**led her, it’s chilling.”

“What happened to Madeleine McCann?

The disappearance of Malaysian Airline flight 370 is up there too.”

I am not sure why, but this is the one case I haven’t been able to stop thinking about for years.

The surveillance video of the perp who parked her car drives me insane.”

My grandfather was a rookie with LAPD when this happened. He told my mom that even as a rookie he noticed a lot of f**k ups the police made.

No idea if his perspective is true or not, but he had a very “what the hell are they doing??” feeling but couldn’t do anything from his position. Just a family myth now.”