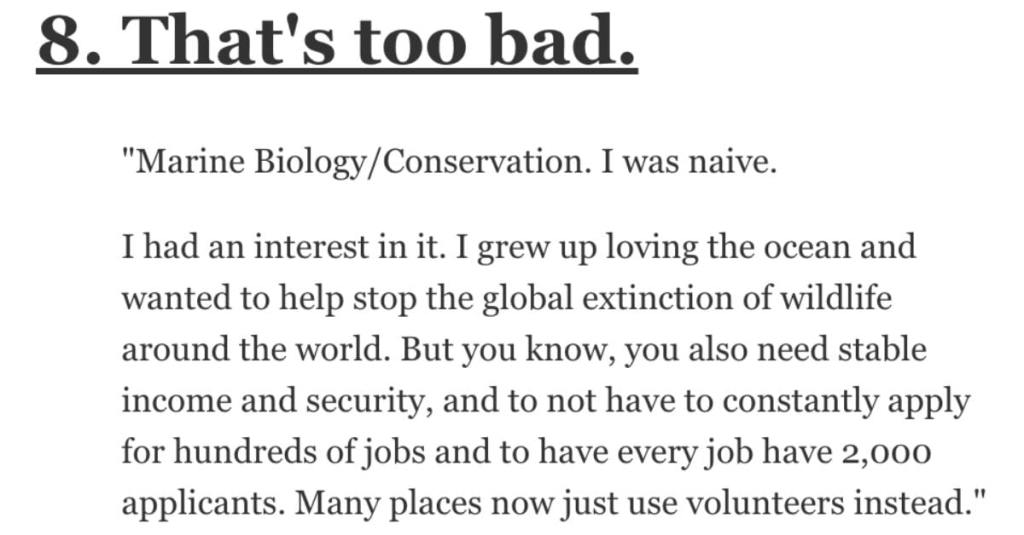 For a lot of us, our career paths were NOT a straight line from Point A to Point B.

We’ve meandered and gone through a bunch of different industries and jobs while we figured out what ultimately worked for us.

It’s a sign of the times as well. It seems like the days of working for one company until you retire are long gone and people now have three or four entirely different careers during their lives.

But it’s definitely good to know about potential career paths that really might not be good options from folks who have been through certain jobs.

What are some career paths to avoid?

Listen kids, back in the day when I went to university it was a job that existed. When I was in middle school and high school it was even respected.

Now it’s nothing. Any moron with a computer can be a journalist and divisive politics are more important than unbiased fact.”

“Went to undergraduate for architecture. I came out of it a completely different person for the worse. It obliterated the confidence I had in myself and reduced me to an anxious mess over trivial things.

But if you liked the designing and challenge of school then real world is nothing like it. School doesn’t prepare you for a typical career. Real world design all about codes and writing things to cover your *ss so you don’t get sued.

I’m lucky to have gotten a decent job in the field. I’m lucky to have gotten a job at all in the field. Academia is fiercely competitive and there are always more people than jobs. Plus you have to go through a PhD program to get one and PhD programs are so abusive and so exploitative that I often wonder why it isn’t a bigger talking point than it is.

You’re put through five years of absolute hell at minimal pay for a shot at MAYBE landing a tenure-track job (or even a full time, non-tenure gig) that, if you’re beyond lucky, will be in a part of the country (or the world) that isn’t a completely irredeemable sh*t hole and, if you’re even luckier, will be at a university whose administrators aren’t a bunch of know-nothing *ssholes and where your colleagues aren’t a bunch of unhinged *ssholes (academia can attract some weird personalities).”

I’m not mad about where I ended up but I definitely wouldn’t do it the same way twice. I’ve come to find out that having any bachelors degree and interview skills will get you a lot farther than just having the “right” degree.”

Had major anxiety and multiple panic attacks in school, did incredibly well in all classes besides my core studies, got yelled at by nurses just for being a student and not having a full concept of what their patient was going through yet.

I’m applying to be a Mortician now. Love working with people but less pressure when they’re dead.”

“Simply not making a choice and getting stuck in retail because of it.

I’m in sales and on commission but the feeling of wasted potential that follows me around is palpable.”

“Graphic design if you’re more of an artist type.

Don’t get me wrong, I have the utmost respect for people who are design-minded and can handle it, and not all graphic design jobs are going to be this way, but most of the employment you’ll find in that field is going to be sales flyers and pamphlets and stuff that will be mind-numbingly boring and unfulfilling and will leave you burnt out and dispassionate about your own artistic desires.

It’s just not a fantastic line of work if you’re more driven by what you care about artistically. In that field the customer is always right, and so you could spend forever on the something you’re proud of for them but they’re very likely to change their mind and tell you to just run with a stick figure their kid drew, or something.”

“Marine Biology/Conservation. I was naive.

I had an interest in it. I grew up loving the ocean and wanted to help stop the global extinction of wildlife around the world. But you know, you also need stable income and security, and to not have to constantly apply for hundreds of jobs and to have every job have 2,000 applicants.

Many places now just use volunteers instead. Volunteers will literally pay thousands to come and work for them. So why would they pay someone to do the work when they can get paid for someone to do it.

All they need is a couple of professionals who know what they are talking about and then they can have an army of volunteers that they teach how to do the job.

It’s rewarding when you finally get something but my god it’s not worth the stress, I’d rather just volunteer instead as a hobby.”

There was recently a whole thread on the topic of zoo-keeping and how it was a terrible career choice. I think if you make it, it’s probably ok. But if you don’t, you’ll be working part time and casual hours forever and being paid peanuts for the privilege.

There’s no security, and every time I tried to move in to a full time role I was passed over for some random on the street with more “enthusiasm”.”

The money is decent but you have to completely sacrifice any meaningful kind of personal life to do it. The hours are long and irregular, you barely sleep, you’re constantly around people with substance abuse issues and are at risk of falling into that yourself, you are always stressed, and work can suddenly end on a dime making budgeting and financial planning extremely difficult.

Regarding my first point, maintaining romantic relationships with anyone who doesn’t work in the industry is extremely difficult (the divorce rate for my union is around 80%) because the majority of people don’t understand the precarious nature of the work and the hours. If you have children, I hope you never want to really know them as people.

It was a fun, cool job in my 20s but there’s a reason I went back to school to do something different.”

If you want to work long, thankless hours for next to no pay and have every single thing you do questioned and criticized, this is the career for you. You will work until you are exhausted and then, in your exhaustion, you will f*ck something up.

At that point everyone will tell you what a horrible person you are and that there is no excuse for f*cking this up.”

“I’ve been a pro news photographer for over twenty years, and as much as I love doing it, in these times I wouldn’t recommend the profession unless you feel you won’t be able to breathe unless you pursue it.

Newspapers are shutting down like crazy all over the country, large dailies and smaller community papers just can’t compete for advertising dollars with the internet.

If you’re staff, the pay is rubbish. If you’re a freelancer, it’s even worse. Equipment is expensive, and when you drop a two- or three-thousand-dollar lens on hard concrete, your heart will break. Not all papers these days will buy all of your equipment for you.

And now, in the interest of cost cutting, more papers are making do with photos reporters take on their phones. They’re usually not very good, but it saves money. It’s a business trying to stay alive.

The glory days of excellent photojournalism are definitely over. Don’t get me wrong, there are still some brilliant news photogs out there, but their numbers have diminished substantially over the past decade.

If this is still your heart’s desire, learn about cameras and lenses. Learn about composition and light. This is the language of photography, and you really must understand it. Look at other news photographers work, take in as much as you can, and dissect what you like or don’t like about it. Try to imitate the ones that impress you. Take thousand of pictures. Be honestly critical about your own work.

You will sacrifice much for this profession, but you will learn so much about so many things on a daily basis. All things considered, it is one fantastic, amazing adventure.”

From your life experiences, what careers would you advise against pursuing?