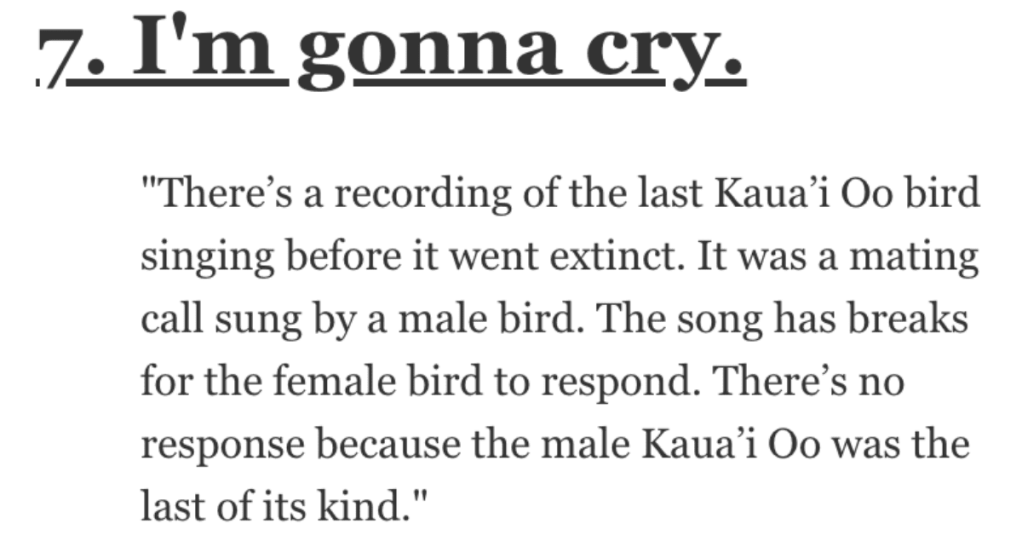 I don’t know why, but anytime I hear sad facts about animals, I get incredibly bummed out.

Don’t get me wrong, I think the human stuff is depressing as well, but there’s something that just makes me a little more emotional when it comes to animals…

But we all get upset by different things.

People on AskReddit opened up and shared the saddest facts they know.

“There is a genetic disorder that makes it impossible for some people to sleep.

“One of my neighbors has a nine year old daughter who has a very rare genetic condition.

She’s not expected to live much beyond her mid – late teens. The girl doesn’t know and believes she’s a perfectly normal child.

It’s heartbreaking to hear her saying that she wants to be a hairdresser when she grows up. She ain’t never gonna grow up”

“There has been a day when you and your childhood friend got out to play for the last time and none of you two was aware of it.”

“That I won’t get to feel my husband’s presence anymore.

He passed away suddenly on the 11th.

I miss him every minute of the day.”

“The older we get, the older our parents get.

“There are over 2,500 ancient languages that are either already extinct, or in danger of being forgotten forever.

Most of these languages are tribal in nature, such as those of Africa, and Central/South America.

Many of the Native American languages here in in the US are dying, but some are being preserved in language learning apps, such as Texas Caddo, and Cherokee.”

“There’s a recording of the last Kaua’i Oo bird singing before it went extinct.

It was a mating call sung by a male bird. The song has breaks for the female bird to respond.

There’s no response because the male Kaua’i Oo was the last of its kind.”

“Some people, either through loneliness, age, or mental health, are so closed off from the outside world that they either can’t or don’t know how to take care of themselves until they d**.

Most of the time the only way for anyone to notice that something is wrong is either by accident or the smell.

There is/was a Dutch guy who films the cleanup of those kinds of houses (he has a cleaning service specialized in those kinds of extreme cases). One woman’s toilet backed up and she just did her business on the bathroom floor for months.

In another case a guy had a square meter of space to sleep in, the rest was literal garbage halfway up the wall. He even made holes in the walls and floors to stuff it in.”

“Cats are the most euthanized pets in shelters even over pitbulls.

I worked at an animal shelter when I was a you g lad and every f**king time someone came to adopt a pet it was a dog! I even heard a family say “ we want a dog only cats don’t love you”

I socialized many of their cats and most of them were so sweet, and cuddly and made me just so sad inside everyday watching people adopt dogs and ignore the cats. This was a no k**l shelter but still it was so heart wrenching I quit because of that.

Cats do love you back you just have to earn their trust and they show it differently than dogs. All animals show love in their own special way.”

This can be for a variety of reasons, but one of the major problems is that a mother hamster will get stressed out and assume that she does not have enough food or space for all of the babies to survive inside of their tiny cage.”

“Overfishing has caused sharks to move further inshore to hunt for food.

You know what happens when they move closer to the shore? Yeah, we k**l them. They’re just trying to survive.

Also, the shark fin trade is brutal. People will catch live sharks and slice their fins off before releasing them back into the ocean.

Without their fins, sharks can’t swim and subsequently d** a painful d**th.”

“A dog will lie awake at night after getting in trouble or having a bad day thinking about it.

Additionally, dogs feed off our energy so if you are having a bad day, anxious or depressed that actually rubs off on your dog.”

What do you think is the saddest fact you know?