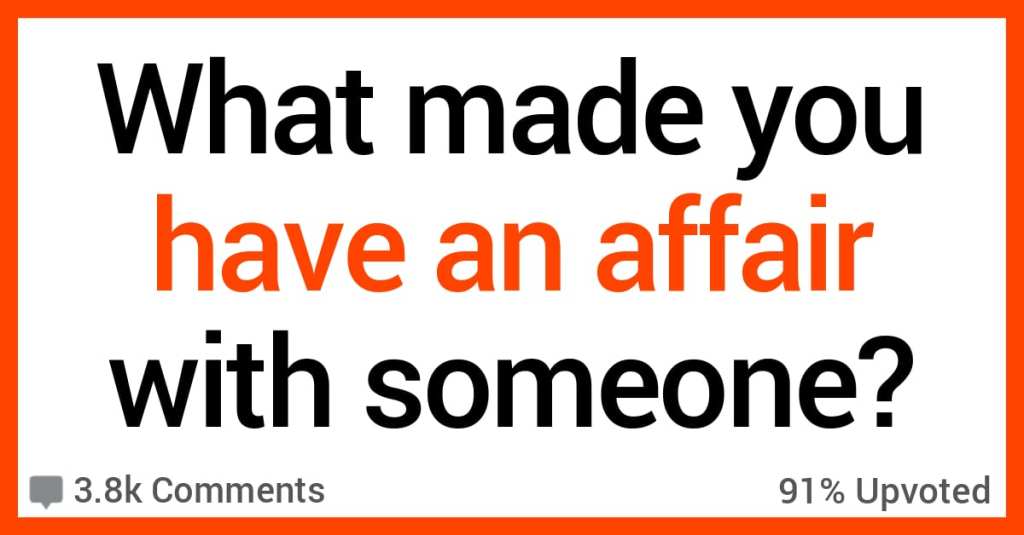 Different strokes for different folks is great and all, but I just don’t see how people can have affairs and deal with it mentally and emotionally.

I’d be a nervous wreck and I’d feel too guilty to make it happen…but I’m also not married so what the hell do I know?

Are you ready to hear some cheating stories?

Folks on Buzzfeed got real and talked about their affairs.

“My mom had d**d and my husband was extremely unsupportive of everything, including responsibilities that came after her d**th.

Imagine being at the lowest of the low and the person who is supposed to be your biggest support does everything to tear you down.

So I found comfort elsewhere and that was on my ex’s big d**k. I regret nothing.”

“”I caught my husband sleeping with s** workers.

It was a few years ago when he was doing it. He kept lying about things I already knew the answers to. I wanted honesty and didn’t get it. I found myself curious, wanting justice, and wanting to feel loved again.

I had an affair with great s** and chemistry that showed me I deserved so much more emotionally. I’m not proud, but my affair helped me find myself again after infidelity.”

“I got pregnant at 16 and later married my child’s father at 21.

At 24, I went to grad school and totally had the hots for my older professor. He would talk to me during stressful periods and was very accommodating about my situation. One night, he was looking over an assignment of mine and something just flipped. It was seemingly innocent at first, but then it felt hot and steamy. Funny thing was, it made my s** life with my husband that much better.

After two years, I finally felt ready to end it when I found out I was pregnant. I told both partners separately and they agreed to be there no matter what. I ended up working things out with my husband. Funny thing is, it’s been three years and I still don’t know who the real father is.””

“Three months after giving birth to our son, my husband complained he wasn’t getting enough o**l.

I was a first-time mom and learning how to be a mother, a wife, and work full time, all while recovering from my C-section. I found out a few weeks later that on his lunch break from work, he met a random woman on Craigslist for some o**l fun.

We are currently in counseling, but will most likely be divorcing.”

“I was raising my niece who was mentally challenged and had fetal al**hol syndrome. Her mom was not in the picture.

From the moment we dated, I let my first husband know we were a package deal. Two years in, and we could finally buy a house and I said we need a room for her. He said, ‘If I thought you were serious about her I never would have married you.’

It took me ages to get him to sign divorce papers but at that moment, as far as I was concerned, the marriage was over and I took care of myself, and yes, spent time with others. It may not have been morally right, but I don’t regret it.”

“I wasn’t the married party, but I was the other woman.

The affair happened with my colleague. We worked a high-stress job that involved heavy drinking after shifts. After spending so much time together, we both fell in love. I moved overseas because of guilt and to give him space to think.

He admitted he loved me and wanted to leave his wife, but she got pregnant and didn’t tell him until she was so far along that an ab**tion was basically not an option.

I severed all contact at that point. I run into him at parties every few years and it’s pretty apparent he feels trapped and discontent.”

“I had an affair because my partner always said, ‘The only reason I would ever leave you would be if you cheated on me.’

I had been trying to drive him away for years, but stuck around for our child’s sake.

I was hopeful that it would work and he’d finally let me go, but I still wound up having to walk out myself after he found out.”

“I had an affair five months into my marriage.

I grew up in a small Southern town with very little LGBTQ representation. I rushed into the marriage with my husband who is great, but has an EXTREMELY overbearing family. I then proceeded to fall in love with my boss from the moment I laid eyes on her when I began a new job.

I hurt a really great guy in the process. However, I do not regret the confidence in who I am now that I know I am a lesbian. I also got out of a situation with his family that could have turned out to be extremely toxic.”

“I’m a 42-year-old mother of two and I recently left my husband. Our issues began a few years into our marriage when he had an affair with his close friend from college.

We worked through it and we were problem-free for the next three years. A few months before I started my affair, he started acting very weirdly. He encouraged me to dye my hair, change the way I dressed and such. I realized he was trying to make me look like his friend from college.

I got really upset, distanced myself from him, and actually started seeking comfort from my best friend. I fell in love with her and left my husband.”

“I have always been attracted to women, which is something that my husband was aware of. I have always fantasized being with a woman.

One day I met someone who started as a friend and we got very close. We took a girls trip and let’s just say my lesbian fantasies came true. I did feel terrible afterward. I justified it to myself with the fact that the person was a woman and not another man. It did happen a few more times, but we stopped eventually.

At this point, I still feel guilty about it, but I try to just not think about it. However, I appreciate the s**ual experience I had with a woman, which is something I should have done more of before getting married.”

“I wasn’t planning on cheating on my now ex-wife. We were happy until a very attractive coworker came on to me at a company party. I was shocked she was interested in me.

We slept together once when my wife was working and I was hooked. We carried on for over a year and my wife never found out and honestly, I never once felt guilty.””

“My ex refused to get help for his crippling depression. I told him it was affecting us.

He said it is what it is, and he wasn’t willing to help me or himself to do anything about it. Meanwhile, a good friend was beginning a divorce process and we bonded over talking and supporting each other.

We left our spouses to be together and we are so happy and in love.”

Wow…now we want to hear from you!

What’s the most scandalous affair you’ve ever heard about? And maybe it’s your own…