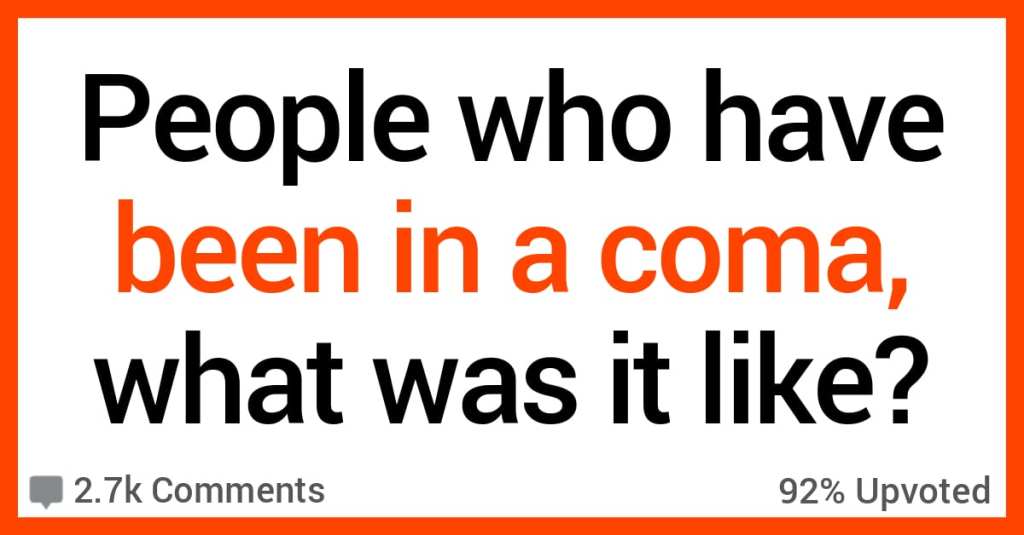 I think being in a coma or even being unconscious for a while has to be absolutely terrifying…when you finally wake up.

And that’s something you can never really understand unless you experience it yourself…and today we’re gonna find out what it’s really like.

AskReddit users who have been in comas talk about what they experienced.

“Brief 36 hour coma after a serious car accident when I was 16.

Absolutely no memories at all of my time in the coma. When I woke up, I was very confused for a number of days. The accident erased my memory of the month prior to the wreck.

Gradually (over the next year or so) those memories all came back up until the point I turned onto the road the accident happened on.”

Serious car accident when I was 9. My father sat in a rocking chair for 3 days waiting for me to open my eyes.

When I did I asked about a new friend my father didn’t know (she was in the car). He thought I’d lost it for sure.”

“I was in a medically induced coma for 7 days, and I don’t remember anything at all. The entire week is just pitch black. I was awake for about half a day before memories started to form.

The following few days I would have crazy hallucinations that felt more real than actual reality. The weird thing is that I still remember most of my hallucinations vividly, but I can barely recall anything that actually happened.”

“A couple years back I was only in a coma for two weeks, it wasn’t due to an accident or anything it was medically induced.

I did have a strange dream though, turned into a reoccurring nightmare for a little while afterwards, basically I had to climb up this black staircase that curved out of sight further up, as I started to climb water started pouring down the stairs making it difficult to go up it.

Eventually I’d hear noises behind me, sorta like heavy machinery but distorted to hell and back, that made me climb harder and faster but more water came down the stairs. As a kid it was absolutely terrifying. Couldn’t tell you what it meant but it still haunts me thinking about it. As for waking up though it wasn’t too bad, quite a shock sure, but honestly not too bad for me.

Weirdest thing that came from it all was how tired I felt, for weeks I couldn’t seem to get any energy. Definitely a 2/10 at best, LOL.”

“In coma for two weeks – lots of wild visions/experiences that were very religious in nature. Time went by quickly.

Was told I flatlined nine times and had to be resuscitated each time and remember (or dreamed?) hearing the steady beep of the heart monitor twice. Very confused when I came out of it.”

“I was in a two week coma after a h**oin overdose about a decade ago.

A couple of months after waking I was able to recall the days leading up to the incident vaguely. Naturally, there was just blackness and nothing once I had OD’d.

I then recall waking up while being intubated (f**king nightmarish experience), surrounded by nurses and doctors pinning me down by my limbs, bright lights, noise. Unable to scream. Unable to breathe. People yelling. Machines pinging. Then blackness.

After waking 13 days later, it was as if I’d awoken from a single night’s sleep with no dreams, no consciousness whatsoever. Just time-travelled basically. Took me a few hours to comprehend who and where I was. But I reckon I’d have been none the wiser if I had d**d that day.”

“I was out for a week when I was diagnosed with Type 1 diabetes.

I remember very small bits and pieces, but not sure if they were from coma time or from the wake up process.

No concept of time, no consciousness, no dread, no pain. Just felt like being asleep for me.”

“I was in a medically induced coma for 6 days.

Iwas just about to turn 16 that month, we were out riding dirt bikes that night and I just so happened to run around a corner just at the exact moment my best buddy was riding his dirtbike around said corner going like 35mph or so, the dreams were insanely long, intense and I woke up thinking they all were real.

I freaked out and threatened to k**l everybody, because in one of my dreams I saw my mom get ripped limb from limb and I saw the people that did it, standing around my hospital bed smiling. They had to restrain me and put me back out, when I came to again i was more calm and my mom was trying to talk to me.

But I just wouldn’t look at her because I didn’t believe she was real because it felt so real watching her d** in that dream. I thought I only slept for a day at first until my dad told me it had been six days. In one of my dreams i got shot, when I was in the middle east somewhere fighting in the military, and he asked me if I knew why I was in the hospital, I said, “yeah…. I got shot”.”

“I’ve been in a coma twice, both after delivering my children.

During the first one, my boyfriend had driven me to the ER and as soon as I walked in the door I was out. At some point, before they moved me to a room, I could hear my mom asking if I was d**d. I wanted to yell out “I can hear you”….but I couldn’t.

I don’t remember anything after that. After the birth of my second child my boyfriend made them keep me an extra day because he didn’t want a repeat of the last time. They said I must have tried to get myself up because they found me on the floor between the bed and the door during rounds.

A couple of days before I woke up they sent me for a CT or MRI or something and I could feel them wheeling my bed down the hall and being agitated when the wheels ran over rough seams (like moving from the floor to the elevator) making the bed slightly shake.”

“It’s a slow processing coming out.

It isn’t like the movies where you just wake up and then go k**l some zombies. Even after just a few days of not moving at all, all of your muscles begin to deteriorate. They waste away to nothing very quickly. People who have been in a coma for longer than a few days often can’t even lift their head up.

They often have to relearn how to move and even talk or eat. It’s definitely not a restful situation. Also… There’s a reason they were in a coma and they still have to recover from that.”

The dream I had I was just floating around in the dark having having a heart to heart with myself about what I did to wind up in that position.”

“I was in a coma due to a drug interaction after surgery.

I could hear everything my doctors and family were saying and was trying to communicate but couldn’t.

They finally gave me Narcan, which brought me back with it’s own special kind of hell.”

Have you or someone you know ever been in a coma?