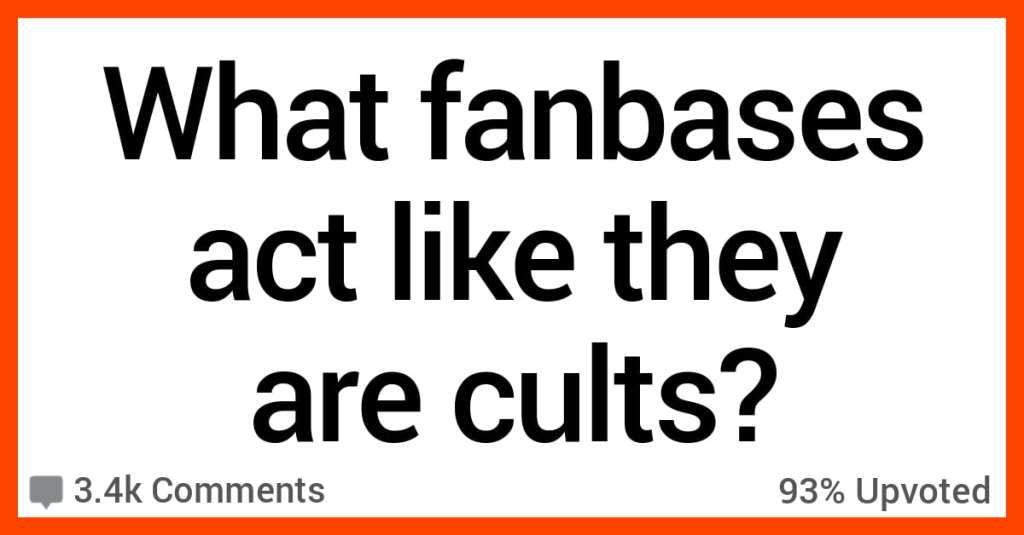 I know my answer to this question! And it probably won’t be a huge revelation to a lot of folks out there…

But I think that SOME people who are really into the Insane Clown Posse are basically a cult.

Come to think of it, they’d probably even agree with me!

People on AskReddit spoke up and admitted what fanbases they think act like cults.

Check out the responses below.

“I absolutely love Taylor Swifts music, been listening to it for years. But I only recently started seeing the fans on my social media feed and my goodness, it’s absurd.

Besides what you said, they care way too much about streaming/buying numbers and awards. They attack other fans, Taylor’s team, other fandoms and sometimes even Taylor herself when songs don’t rise to the top of the charts or she doesn’t win a fan voted award.

It’s so weird to me because what I’ve seen of Taylor Swift, she is quite humble and just focuses on music and putting on a good show. Also, she has really handled a lot of scandels that weren’t her fault with grace and kindness. Totally opposite of what her fand are like online LOL.”

Seriously. If you walk into a rehearsal 15 minutes late, you’re gonna see some weird s**t.”

But whenever I watch Star Wars (insert that silver boba fett guy and baby yoda) and then i talk about why it didn’t make sense (silver guy was on ground and those droids just looked at him like there was nothing there instead of blasting him right away).

To give an unbiased answer, he’s a conservative political philosopher who became really popular after publicly criticising a Canadian law on misgendering people & giving an infamous interview on Channel 4 News in 2018.

“Fans of the Broadway show Hamilton.

I used to be a huge fan and suffered through the weird fandom. While Hamilton did great things for POC on Broadway, it opened the doors for teenagers to romanticize and s**ualize slaveowners.

I tried to criticize it one time online (and it wasn’t even that bad of a criticism.) and I literally got chased off of tumblr. Oh and, don’t get me started on Thomas Jefferson’s Hatsune Miku binder…”

People will literally divorce it break up or just ignore people because their signs are”incompatible”.”

“As someone who tried to go vegan, vegans.

As is the case with all groups, not all vegans are had. I’ve met some very nice and not annoying vegans, but so many of them have to tell you every 5 seconds that they’re vegan. And the ones that will spent hours trying to convince you to go vegans are the worst.

This is coming from someone who was that annoying vegan that tried to convert everyone. I’m just vegetarian now and I’m way more sufferable.”

“Fans of Zack Snyder. I saw Army of the Dead yesterday and I just gotta say, that movie is like, objectively bad… but his fans honestly cannot see it.

Like, I’m sure they’re thinking stuff like, “Oh, his directing, writing, and cinematography was so stunning and brave! The h**ers are just jealous of all the wrinkles his brain has! I wonder what the robot zombies and UFOs mean! He must have had a reason to randomly start talking about time loops in a zombie movie! Tee-hee, who cares about stuff like plot, acting, and continuity errors, just turn your brain off you snob!”

Like, I’m not saying he’s a terrible director or something; he’s done some great stuff. But this movie was absolute dog s**t, and I just find it kinda weird how his fans, and major film critics for that matter, will defend it when it is just so blatantly terrible.”

“As a K-Pop fan…..K-pop fans. Now it’s not all of them, but there are definitely ones that get laughed at for how they fetishize/infantilize the idols and stuff.

It’s insane how they will defend and protect the problematic idols against those who rightfully call them out. Some of them have forums talking about personal not public business of the idols. They make up stories about them, and some of them gatekeep to know end.

Some also stalk and poison idols and so on, though the last point used to happen like in earlier years, it’s still freaking crazy. I just try not to associate with those ones, but the chill ones instead.”

“Macs have better display” or “the programs I use work better in apple” and I want to hit those people because usually the programs they refer to are the adobe suite, which a lot of my classmates in uni ran on windows machines.

Source:: Works in IT and studied Digital Art.”

Anything reusing a WWII American fascist/N**i sympathizer slogan in 21st century is not thinking their position all the way through.

Or, they’re terrible. One of those…”

sSeriously, if you’ve ever been cornered by a radiohead fan in the wild, you know how annoying the hardcore fans can be. But the fact that I had one assume because i liked “real alternative music” (i was wearing my Slint t-shirt at the time) that I must like Radiohead.

And he went on for a good 30 mins (not letting me get a word in) and telling me all his wild theories about how all the albums are connected and if you add the barcode for the japanese release of ok computer with PI then divide by 3, you get a prize where tom york comes down from the heavens and gives you a gentle pat on the b**t (not really what he said but he was talking about symbols and s**t).

My major takeaway with Radiohead fans is they think they’re smarter than everyone else because they listen to them and if Radiohead are considered a smart band, then they, as fans, must also be smart.”

Do you think there are some fanbases out there that act like cults?