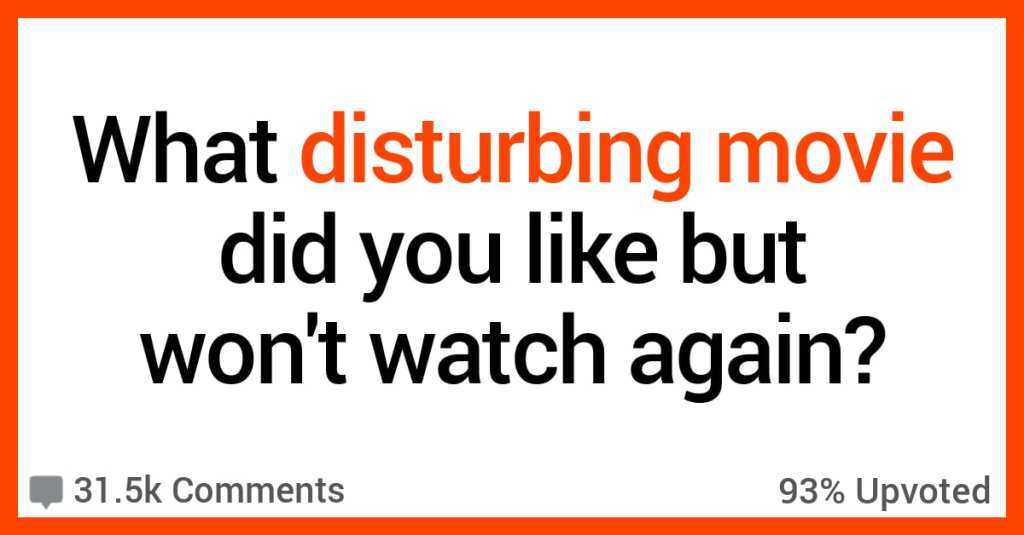 There are many great movies that I’ve seen in my life…that I never want to see again because they are depressing and disturbing.

But I’d still recommend them to people to check out…

Once and once only.

AskReddit users talked about the disturbing movies they’d recommend but that they never want to see again.

“Threads is absolutley harrowing to watch, but a very powerful film.

I think the best part of Threads for me( or worst as it might be) is that it is filmed and set in my home city. which as I’m sure you can imagine makes it even more effective.”

I don’t think I’ve ever really gotten over it.”

Truly the most effective psychological horror film I have ever seen.”

Nicolas Cage is amazing in it (Won an Oscar for it!), but as a recovered al**holic, that film hits WAY too close to home.

I can’t bring myself to watch it again.

The anger and hopelessness I felt for that man and those people is beyond compare.”

I watched the very first bit of it when I was in officer training and thought it was a comedy.

A few months later I sat down and watched the whole thing. It’s not a comedy…”

“What Dreams May Come.

It’s the most beautiful movie and I think everyone should watch it at least once, but I haven’t been able to bring myself to watch it since Robin Williams d**d.

I actually haven’t watched anything he’s in since he d**d.”

The f**king curb stomp is still clear in my mind and it’s been years.”

My childhood literally ended after finishing that movie.”

“The Boy in the Striped Pajamas.

Still haunts me. Still f**ks me up, takes me back there, breaks my heart.

They maintained that brilliant innocence of his throughout the movie. THAT’S what makes the ending of this movie just so very soul wrenching. I’m still so very moved by this film.”

I just watched this for the first time about a month ago. I held it together fine until Oskar broke down crying because he couldn’t save more people.

Then came the waterworks.”

“Requiem for a Dream.

Watched this without knowing much about it with my roommate’s whole family, to the end.

Never thought that scene would end.”

Just knowing it happened brings me so much pain.”

Somebody had recommended it in a thread, and I really like Jeremy Renner, so my wife and I sat down to watch it. The tension in the film ratchets up nicely, you get a sense of the desperation these folks on the tribe are experiencing, the hopelessness in their search for justice.

I enjoyed the dynamic with Renner’s character and the locals – he’s from the place and still an outsider, which is something we can all identify with in some way. The big shootout at the remote camp (“why is he flanking me?!?!”) was INCREDIBLE in every aspect of filmmaking. My heart was actually pounding during that scene, a response I rarely get while watching a film.

But my god, that r**e scene just destroyed us. I know that’s the point of it, to telegraph how sickening the act was, the senselessness of it all. I don’t think I got an hour of sleep that night and had trouble getting that scene out of my mind for probably two weeks afterward. I think we both cried during and after the movie.

I generally enjoy films concerning darker tones, like horror, thrillers, mystery, but something about that scene broke me for more than a week. I guess you could call that great filmmaking, but I’ll never watch that movie again and do my best to think of it as little as possible moving forward. Still think it was a great movie for a lot of reasons, but jesus christ, that scene….

In the comments, tell us what disturbing movies you’d recommend but that you don’t want to see again.