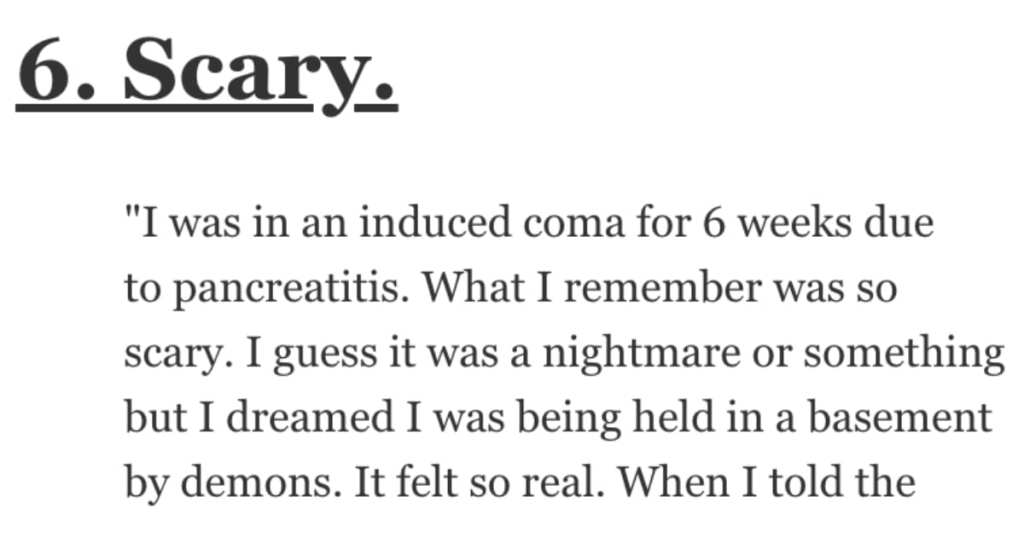 If You’ve Been in a Coma, What Was It Like? People Shared Their Stories.

I have a friend who got hit by a car while he was riding his bike and he was in a coma for a few days.

Luckily, he woke up and is doing great…but still, I think that kind of experience has to change a person in some way…

So, what is being in a coma really like?

AskReddit users opened up and talked about their experiences.

“I was in a coma for 6 weeks with double pneumonia, sepsis and kidney failure.

I have very few vivid memories from being under but had some very strange visions once I woke due to the ammount of drugs I was pumped full of.

I had no concept of time and thought I had only been out for a day or so.”

“It was only a few days in a medically induced coma.

But I just remember it being dark, short blips of family being in the room, and when the doctor first tried telling me where I was and asking me if I knew my name, I was tempted answer it as Brittney Spears.

But I didn’t want my parents freaking out.”

They pulled me out of it after two or three days and I extubated myself, ripped out my IVs and punched a nurse before they sedated me again and restrained me. Day five I woke up and the first thing I remember is not knowing anything. Had to describe, but my brain was basically at a primal level.

The only thing I could process was fear. Then I “remembered”I was human. At that point it was “okay, my name is X, I’m alive. I’m in a hospital. Those are nurses. Holy s**t I fell off a cliff!” and I calmed down. After that things are blurry. I think they pushed something to relax me after my initial panic. I apparently signalled to ask for a pen and paper(I was retubed so I couldn’t speak) and wrote “can I have a whiskey IV?” And “I feel like a salad.”

As far as while I was under, my last memory was being loaded into a helicopter and the medic asking “X, you’re in the bird it’s gonna be okay. Do you understand?” And me saying “yeah, this s**t hurts, knock me the f**k out.” And something got pushed in my IV and next thing I know I’m experiencing what I said above. No dreams, no locked in syndrome, nothing.”

“I was in a diabetic coma for 2 days. No dreams, no nothing, just out.

When I (slowly) woke up I had some kind of mild / minor amnesia. I didn’t know where I was, or who I was, but I recognized my mom immediately when I saw her.

TMI but the doctors were just about to put in a catheter when I woke up, then I peed for like 2 minutes straight. The nurse was impressed.”

“I had a C-section and woke up 4 days later in ICU. Amniotic fluid leaked into my lungs during the C section. I also lost a lot of blood and needed 3 blood transfusions.

I was only in a coma for 4 days. It was black, no dreams, no time passing. My memories of before the coma don’t have a timeline nor make any sense. To me it happened in surgery, I was fully awake and started getting tired and then black.

Family says it happened differently, that it was after and had visitors for those days. I don’t remember any of those days at all. I still have issues with short term memory.”

“I was in an induced coma for 6 weeks due to pancreatitis.

What I remember was so scary. I guess it was a nightmare or something but I dreamed I was being held in a basement by demons. It felt so real.

When I told the doctors they said it was the Propofol that made me hallucinate.”

“I was out for six weeks due to a brain virus (I wasn’t expected to survive). I had no concept of how long I was out when I woke and the first couple of days are very sketchy.

I don’t remember any dreams, but I do have memories of what happened in the room around me. So I can confirm that it is very important to talk to people in a coma.”

“I also don’t have any memory of being unconscious after passing out from high or low blood sugar (usually in my sleep). Just suddenly came to, sweaty, disoriented, or in the ER.

It’s really scary to see how much time you’ve lost, wonder why you’re so sore (seizures), and sometimes hear about what you said or did that you don’t remember at all. Other times you do remember the lead up to unconsciousness but you were too sick or confused to help yourself.

Fortunately with new continuous glucose monitoring technology I haven’t had any major issues for a few years now. It’s a huge relief!”

“I was in a coma for about three days back in 2018 and I don’t remember much, but I do remember having vague dreams? Like a whisper of 1-2 dreams the entire time and then I woke up as if only 5mins had passed.

It really just felt like I’d been asleep for a few minutes and teleported from my bedroom to a hospital bed but instead of a few minutes elapsing, it was three days.

Whatever meds they gave me wiped the vast majority of my memory all the way through about a week after I woke up though.

I did feel like a different person somewhat after the coma, like I was me but as if I’d been reset? Idk how to describe it well enough to make sense, but it was a very strange experience.”

“My husband was placed in an induced coma following a motorcycle accident.

He said it was like time stopped in his mind, and he was stuck in a loop of the accident.

He was conscious and remembers when he was loaded onto the flying doctors plane at the scene of the accident, but he doesn’t remember arriving at the hospital.”

“For me, the drugs were the most memorable part of the whole experience. They are very good drugs.

I remember nothing of being in the actual coma, and I know I was awake (conscious) at least half a day before any memories started to form.

There was no sense of panic or alarm when I was told what happened. My emotions were very much blunted by the benzos. You could have told me the doctors removed both of my legs at the hip and I wouldn’t have cared.

I wasn’t sure how long I had been out, but it certainly didn’t feel like “days.” I knew instinctively that the drop-panel ceiling tiles above my hospital bed that I had been staring at for hours were just standard rectangular drop-panel ceiling tiles, but I simply couldn’t make them appear that way, no matter how hard I tried. The ceiling looked like a Picasso painting to me. Also, I remember all the colors around me in the ICU unit were incredibly vivid; the bluest of blues, the yellowest of yellows.

The whole experience of “waking up” is not instant; it takes a couple days to become aware and functional again, like a computer rebooting after a power outage. Overall, it was like a foggy mushroom trip.

It does weird things to your memory that you don’t discover until after the fact. At the time it happened, I had a job operating a specialized piece of machinery, and I was pretty good at it. I spent months learning how to use it. When I returned to work after eight weeks recovering, I could remember my co-workers and the layout of the building and stuff like that no problem, but the machine I had spent the last year operating every day was completely alien to me. I couldn’t remember how to load it, how to turn it on, which button controlled which function, etc.

I’m a huge football fan but I have no recollection of my favorite team literally winning the world championship earlier that year, despite having rooted for them my entire life. Certain compartments of my brain have been zapped while others have been left unscathed.

During the time I was out cold, Donald Trump won the 2016 election. I had no memory of him even campaigning for president, much less winning, until my brother told me in the hospital. Like, how do you forget something like that? What the f**k? I should have told the doctors to put me back under until 2020.”

“I was in a coma for over 3 days, but was in the hospital for over 2 months. The doctors were trying different procedures for my brain to kickstart the short term memory.

I literally couldn’t remember anything. I would routinely reintroduce myself to nurses, not remembering them from a few minutes prior. I would start a conversation, only to forget what I was saying mid sentence, and just stop talking. It was so frustrating. I don’t remember anything from that time, but I remember how I felt about certain situations when they are brought up by others.

As an example, a person who I’m no longer with, yelled at me, with nurses present, and was banned from visiting. I don’t remember that exchange, but I remember feeling extremely hurt and sad, but don’t know why. When I was speaking with a relative, she brought up the “yelling situation” and the feelings came flooding back, but not what was said or who was there.

I’m getting better and I’m able to retain new memories, overall … just not during any extremely stressful moments. My brain protects itself and stops “recording” when I find myself in a stressful situation. It’s really not fun and can be truly challenging.”

Have you ever been in a coma?

Do it in the comments! Thanks!