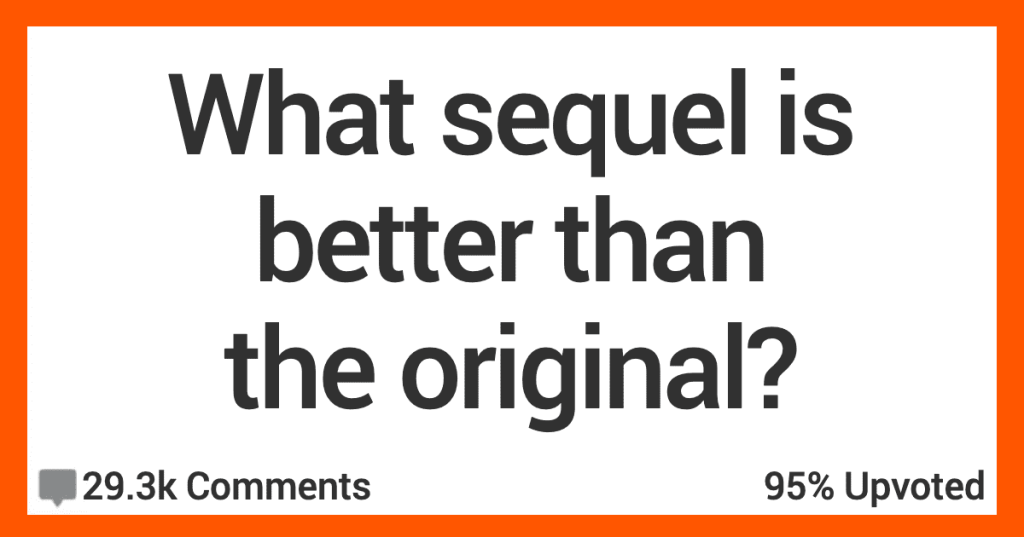 Most of the time, movie sequels never live up to the originals.

People get so attached to the first movie in a series that they can’t ever enjoy the second film as much.

And, let’s be real, sequels usually are never as good as that first film that grabbed your attention.

But there are exceptions!

And today we’re going to hear from AskReddit users about the movie sequels they think are better than the originals.

“Shrek 2 really built out the Shrekiverse.

Paired with an excellent soundtrack, humor in all the right parts, and can make fun of itself.

I can confidently say that it is better than Shrek 1.”

I had watched The Road Warrior like a dozen times before seeing the first Mad Max.

Boy, what a different experience.”

I think this one belongs at the top of the list because it wasn’t just a really good sequel, it actually redefined Star Trek’s entire aesthetic for the next couple of decades and also brought the franchise back from the d**d.”

The scene with Johanna stealing the eggs from the lunchbox will always make me laugh.”

Better than the original.”

“The Empire Strikes Back.

As much as I love A New Hope, I’ve got to agree.

Young me left the cinema in a state of shock, but looking back I can see the brilliance.”

The first was no doubt amazing.

The second movie sustained and improved the first movie offered, the score was amazing, the comedy is still funny, but most importantly the drama and emotional pang still hits hard.”

‘If you’re good at something, never do it for free.’

“It’s not about the money, it’s about sending a message. Everything burns!”

What a masterful perfomance by Heath Ledger.To quote a review on his performance ” The Joker represents the hole in which much of humanity’s irrational predilections toward violence is collectively stored and ignored by our cultural memory… until it can’t be.””

Gomez: I HAVE SEEN THE UNHOLY MAGGOTS WHICH FEAST IN THE DARK RECESSES OF THE HUMAN SOUL!

Spider Man laid a great foundation and was awesome.

Spider Man 2 was on a whole other level.”

My husband thinks it’s because the actors are attractive (which helps) but it’s because it has all the elements I enjoy: witty banter, a male female relationship that isn’t leading to sex, and a twist or big turn of events.”

What sequels do you think are better than the originals?