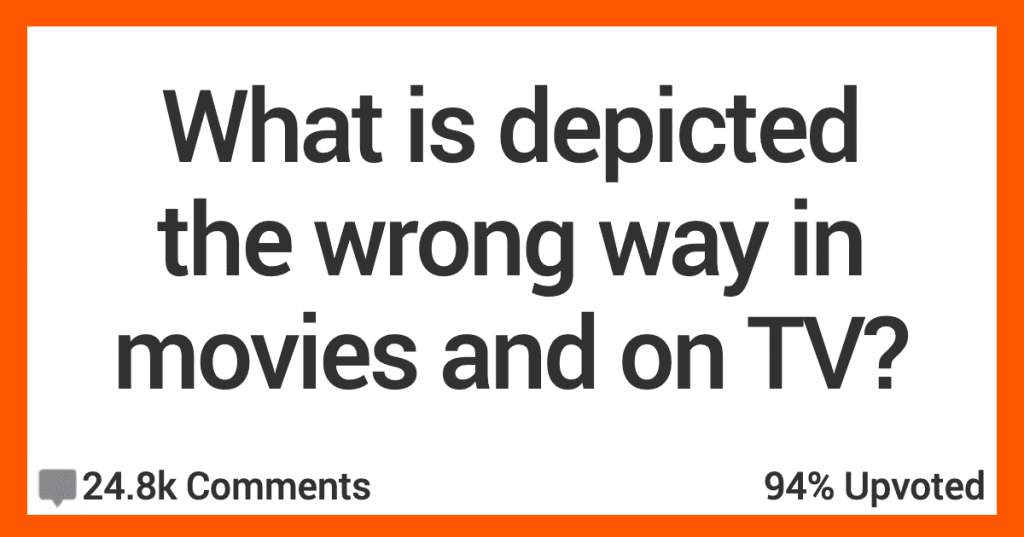 I love movies but boy, do they get a lot of things wrong, or what?

I’m speaking the truth and you know it!

And today we’re going to hear from folks on AskReddit users about what they think is always portrayed the wrong way in movies and TV shows.

“People who pop out of a sewer system in the middle of the street by easily pushing aside the manhole cover.

Those d**n things are heavy.”

Apparently you only have to worry about the flame and the concussive impact is really minimal.”

“Basically any kind of legal proceeding, but jury trials especially.

The thing is that trials tend to be pretty boring and move slowly in reality. And they rarely have the kind of dramatic moments portrayed in movies. Also, most screenwriters don’t know basic facts about procedure, rules of evidence, etc.

As a lawyer, I can barely watch shows or movies about legal cases. The unrealistic portrayals always ruin it for me. But it’s a joy on the rare occasion when it’s done right.”

“The way that apparently crime labs solve crimes with DNA tests and unlimited access to every camera in every building in the city.”

“Anything to do with forensics and autopsies.

They do not have access to 1% of the technology shown on TV, and in fact, a lot of what is shown just doesn’t exist.”

“It always bothers me how long people look over at their passenger when driving.

KEEP YOUR EYES ON THE ROAD.”

When do these people work and where does the money come from?”

It’s a common issue that drives me nuts due to it being relevant to my job. I work in Coast Guard radio monitoring and communications with mariners.

“Over” means “I am done speaking, and am now awaiting your response.” An example is “Sailing vessel Sunny Day, this is the Coast Guard, over.”

“Out” means “I have completed our conversation. There will be no further broadcasts from me.” An example is “Roger that Sunny Day. You are not in distress. Coast Guard standing by on Channel 16. Out.”

“Over and out” makes no freaking sense, yet it’s in EVERYTHING. Radio shows. Commercials. Cartoons. Movies. Books.”

About 10 minutes before the show’s over, the resident nerd will say something like “I cross-referenced the license plate with the average rainfall in each region, and compared that with the average number of clown shoes sold per capita in nearby American cities, so the k**ler is probably in this three-block radius”.

Then, there’s a car chase.”

“The treatment for flatline.

No, you are not supposed to get the defibrillators.”

“HVAC DUCTS ARE NOT STRONG ENOUGH TO HOLD A HUMAN.

THEY ARE MADE TO HOLD AIR.”

“But anyway, in almost every film or television show depicting military combat in the 18th Century (think the American Revolution or the Seven Years War), the soldiers wear their cocked hats (tricorn hats) facing forward.

In reality the hats were worn at an angle because if you had to turn your head while shouldering your rifle or musket, it would end up hitting your headwear out of place had they been worn facing forward.”