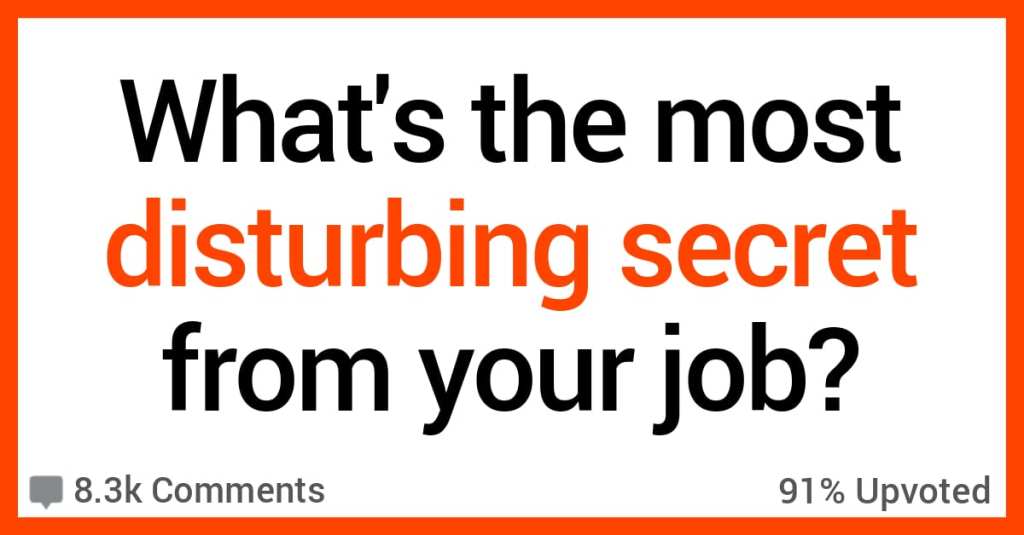 12 People Shared the Biggest Secrets About Their Jobs

Until you’re deep in the trenches, you never know what a job is really like.

And, along the way, when you have different occupations, you learn that every single job out there has its little secrets.

What are the biggest secrets about your job?

People on Buzzfeed answered that question. Here’s what they had to say.

“I work at a trampoline park, and the whole place is nasty.

Kids go to the bathroom everywhere, and we can’t clean p**s out of the foam pit — no one wants to touch it.

So, chances are, you are jumping into pee-soaked foam.”

“Some factories will make the same exact product for more than one company. They’re made in the same building, by the same people, on the same machines, with the same materials, in the same design.

Literally the only thing that changes is the tag/logo, but because the name on the finished product is different, they can sell it at vastly different price points. My dad has worked at more than one factory that has done this…”

“”I used to work at a large national chain of bridal stores, and the wedding dresses you’re trying on are NEVER washed. We would try to spot clean if a bride got makeup inside or a buildup of deodorant.

And the bridesmaids dresses are 10x worse because they are tried on by so many more people, and the styles never change. They smelled like B.O. and dirt. I will say that we did throw out a dress after a bride got period blood all down the inside, so at least there’s that.”

“I work in a furniture store that makes custom furniture on request.

If you give us a bad attitude, you can bet you’re paying a higher price.”

“I work in a small pub/restaurant as a server. Recently, I helped the kitchen staff clean the fryers in the morning before opening.

I assumed they were going to change the oil in them after we finished, but they did not.

A significant amount of degreaser (which is toxic) got into the oil that we used all day and probably the next as well.”

“If you’re using medical insurance to have a breast augmentation and your doctor takes photos, be aware that those photos are sent to the insurance company and are seen by non-medical office staff.”

“I work at a swimming pool. When someone s**ts in the pool, we only evacuate it for a short period of time and maybe add some extra chlorine with a bucket to give the illusion we are doing something.

Short of scooping it out with a net (which is sometimes not an option since baby p**p dissipates), there is nothing we can or need to do because there is so much chlorine in the pool, it doesn’t even matter.”

“Hotels and motels are all different. I used to be a housekeeper at a really cheap motel and everything got scrubbed from top to bottom.

Then, I worked at a very high-end hotel, and we had time limits on how long each room could be cleaned. It was nasty. I lost my job because I took too long cleaning everything correctly. Check the drawers, check under the bed, and if there’s c**p, it hasn’t been cleaned properly.

Most housekeepers have 10–15 minutes on single room, a double, and if they’re lucky, a whopping 15 minutes on a suite before the boss [says] you need to move onto the next room — finished or not.”

“Whenever you’re at a fast-food drive-thru, WE HEAR EVERYTHING. As long as you are in the censor, our mics are open.

So, we can listen to your phone conversation, jammin’ music taste, or even your rude comments.”

“I work at a dealership, and it’s best to go the last day of the month. Everyone is scrambling to meet their bonuses and will even take a loser deal.

Do not ever settle for what they try to give you at first. They CAN do better. They give you a bad price at the start to see if you’ll take it, but just stay firm and tell them that they can do better!

When they say they’re ‘talking to the banks,’ that’s not true. That just means they’re talking to their desk (desk manager).”

“NEVER use glasses provided in hotel rooms, especially the bathrooms.

I’ve seen those get ‘cleaned’ with the same rag that cleans the toilet and sink.

Think staying in an expensive hotel will save you from this nastiness? Think again.”

What are some big secrets about your job?

Sound off in the comments and fill us in!