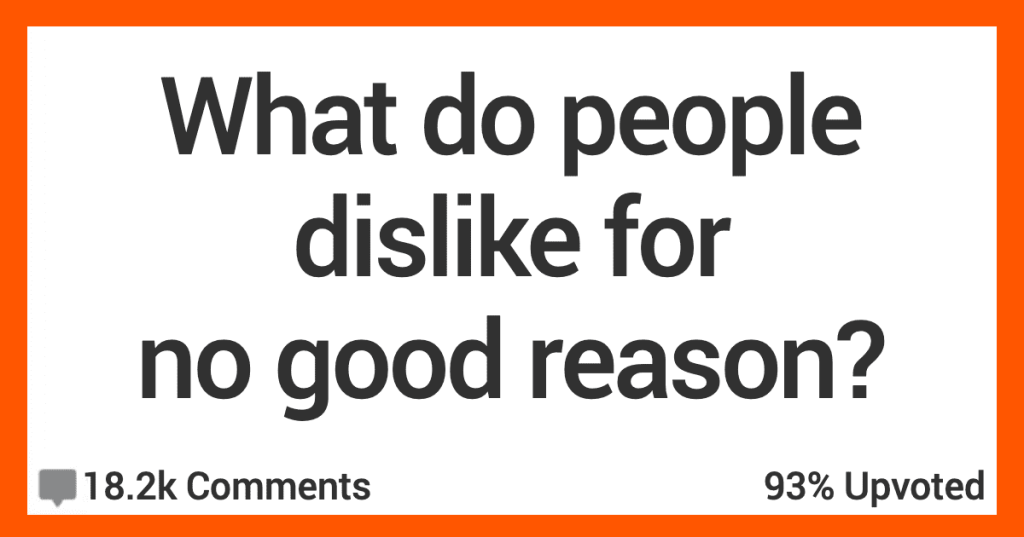 Why does Guy Fieri get so much grief from people and get made fun of so much?

His TV show is good, he does a lot of good work for charities, and he promotes small businesses all over the country.

But still…people like to give him a hard time.

And AskReddit users talked about what they think people don’t like for no good reason.

Literally everyone does it on Halloween but once you put a name to it it’s “weird”?

It’s just an art form sure some people can be cringey but the actual art itself isn’t.”

“Like most things involving criticism of nerd culture, I blame Homestuck and our society’s irrational h**red of teenagers being into anything.”

“Being a kind, polite big-hearted person.

When I worked retail, I had a customer throw a fit about our “Happy Holidays” signs because, “this is America and most people here are Christian.”

Later, I found out this sentiment is nauseatingly common.

Let women like things even if they are commonly liked and mainstream. It’s not hurting anybody that a large group of women enjoy pumpkin spice lattes or watch reality TV or enjoy taking a trip to target.

It makes them happy, so why should it annoy so many other people?”

“In the USA, bidets.

You have no idea how much you’ll love it.

Buy a washlet for your toilet, it’s a game changer.”

A ton (not all) people think their generation’s music was better than whatever is current.

It is hard to accept that your teenage music sucked to the generation before. It is a cycle and the wheels keep on turning.”

One of the arguments I’ve heard, “they are taking our jobs!” I came to your country after leaving my family behind, paying thrice the tuition fees for the same education, paying health insurance which is free to you, and at a disadvantage generally.

Immigrants work twice as hard to be recognized as just as mediocre as you.”

Have never met one who did anything remotely annoying. Yet the internet tells me they are everywhere pushing crazy things. I keep seeing them compared to N**is, incels and other extremists groups.

The only examples I ever see are strawman Twitter posts or hypotheticals.”

“Spiders. When people see spiders (or pictures of spiders) their reaction is “K**l it with fire!”

But why? Sure, there are some venomous spiders, but for the most part, they live their lives eating all those other insects that do bad things (like flies walking on poo and then on your sandwich, mosquitoes, wasps, termites, etc, etc).

They help us, and yet people hate them because they have 8 legs and looks scary. Unless you’re a bug in it’s web, how can they be scary?”

The stereotype that they’re all doing well and are entitled snots is so untrue. The stereotype exists because privileged snots make the most noise.

Plenty are on fixed incomes barely able to feed themselves.”

What do you think people dislike for no reason?