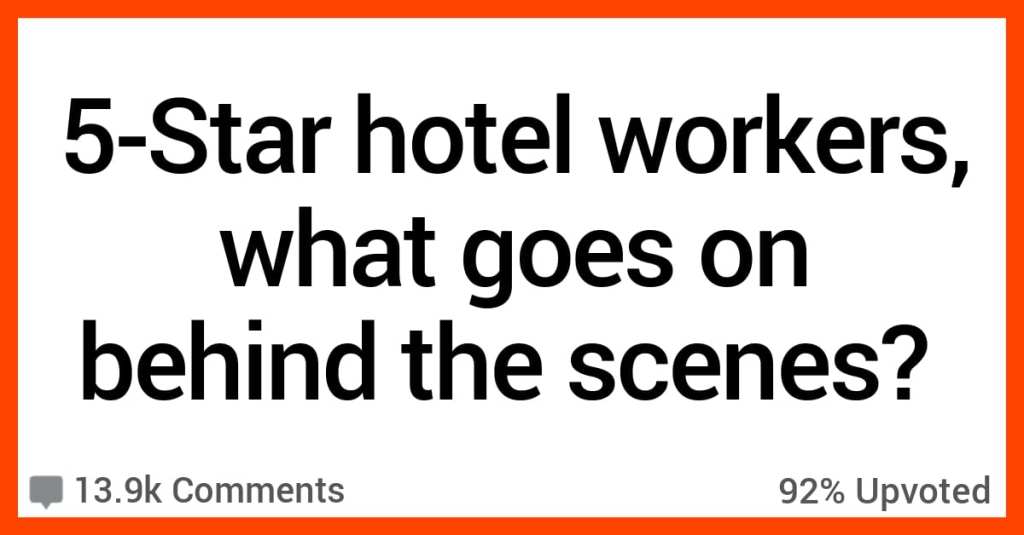 Beneath all the glitz and the glamor, there’s always some grime.

That goes for pretty much every fancy thing you can imagine and that includes 5-star hotels.

While the staff is bending over backward to accommodate guests, you better believe that there’s some stuff going on that the folks in charge keep from them.

AskReddit users who have worked in fancy hotels talk about what goes on behind the scenes that most people don’t know about.

In some places there’s a reasonable chance somebody has d**d in your bed. Obviously it varies with the type of hotel and its clientele, but some places you get d**ths weekly (not that the hotel is unsafe but unfit old people over exerting themselves).

“Bedbugs. They happen in every hotel.

You might be paying $5k a night but your luggage was in the hold with everyone else’s.

If there’s only one or two bugs and none in the adjacent rooms (diamond style, so above, below, and both sides) then you brought them in.”

“When you complain, the nicest, more understanding guest gets the better compensation, the rude guest gets bare minimum.

Always treat the staff with respect and be friendly, you’d be surprised the number of people who are rude. Even for the smallest of issues.”

“We don’t bat an eye at p**stitution or whatever goes on in the rooms as long as it doesn’t affect other guests.

Half the women that come to the bar are working girls looking for a sale. The only thing that the hotel industry ever really reports is human trafficking.

There are tell tale signs and if something doesn’t add up we do report it to local authorities.”

“One thing that was common was my manager would just spam extra drinks onto the bill at events to make more money.

Or for example if a big wedding ordered 50 bottles of champagne, they’d only give them 30 and would keep 20 back and if they ran out, they’d have to buy more.

I reported this to Senior management and they just laughed saying it’s normal. I actually got told off for not taking part in this.”

“I worked in security for one and housekeeping called us all the time for drugs they’d find in a room.

The first thing we’d ask for is the room number and we’d look up the name of the guest. If it was a VIP or someone important to us we’d tell them to leave it there and “we’d take care of it.”

If the guest was someone we didn’t know and not important to us we’d go up there and take it out of the room, then threaten to evict them from their stay if they did it again.

The clues/hints we would use: -what’s their status tier? Diamond members almost always got a pass -how did they book the room? If it was a 3rd party like Expedia…no pass -how many times had they stayed at our specific property? 5 or more…pass -how much had they charged up? If they were spending money on property outside of the room rate…pass

Basically you could have c**aine in your room if you spent enough money.”

“Affairs. The hotel I worked at for a year had a strict privacy policy around this and you are told, well it’s drilled into you, “not our business”.

Unsure what it’s like these days but my entry level job in the travel booking world started as a travel planner for a 5 star chain in Melbourne Australia a couple of decades ago. My station was next to reception (I looked like I was a part of reception, but was on the end) and it was not uncommon to have the affair couple check in then, while the affair partner was still checked in, the cheating spouse would return the following day with spouse (sometimes spouse and kids) and check into another hotel room.

We were under strict instructions “not our business”. But it wasn’t uncommon on holidays for both spouse and affair partner to be in the same hotel at the same time.

Wasn’t uncommon to see married people use the day stay program to cheat, sometimes with the same person (affair partner) but on occasion someone new (it’s not below me to say I took some joy in knowing the cheater was being cheated on.)

However there is that “one” that will be seared on my brain forevermore. A married couple, both had rings on so I just assumed husband and wife, were regulars at the hotel for weekend stays, nice chatty folk (I was young so I didn’t get many people stop and chat with me).

I booked them on some day trips, sunset dinner cruises etc mostly couple/romance geared packages and since ID wasn’t required for both to make the bookings they never corrected me when I booked the itineraries in both names but with his surname (since he paid with his card, I had his full name.) So cut to a few months later, this married man checks in but with a different woman, sigh.

I will forever feel like a monster when that woman “snuck” downstairs to book herself and her husband the exact same romantic sunset cruise package that that man had booked with this other lady only a fortnight ago, to celebrate the end of her chemo round. She wouldn’t stop talking about how this getaway was her thankyou gift to her husband who has been so amazing and supportive during this time. … typing it I still feel like the worst human that I choose my job (breach of privacy is instant dismissal) over telling her what was going on.

And yes that other woman (the woman who was having the affair with the married man whose wife was battling cancer) did turn up with her own husband and booked a dinner cruise and her last name on her ID was not the last name I had been using previously so that sealed it that they were having an affair together.”

As for guests, the usual. Most people tend to just be another guest but, there is a lot of: Grandstanding, threats against jobs and security of the institution’s reputation, entitlement (in my case, handouts of very expensive and VERY officiously regulated products), p**stitution, drugs, gambling, sleeping around with business associates to assure deals and bribery.

All things pieced together by hearing multiple conversations within a week. I don’t recall bribery of public officials or anything like that, though.”

P**stitutes slip drugs into drinks and before you know it, you’re dealing with a guest complaining that they’ve been robbed of thousands of dollars.

I’ve had to do investigations of instances where a guy ends up in a room with a hooker and she’ll get him to take out cash at the ATM because she has pics of what they’ve been up to and knows he’s married. All the while the guest has no memory of the whole night.”

“I worked at a resort during college so it was enlightening to me at that age: how many neglected wives there are at these places.

I’m not talking about the stereotypical trophy wives who are content to run up the spa and room service bills while their husbands are in seminars or golfing.

There are successful, smart, beautiful, women who have busy/s**tty husbands and are happy to talk to anybody about it who will listen. And the women ran the gammut: entrepreneurs, doctors, lawyers, CPAs.

It was sad to hear stories about how it was nice to get away to such a beautiful place but that they would likely not see their spouse and that was okay. I was very naive at the time and it was a huge surprise.”

Management wants things to be automatic for you. A person there when you need them and every item you could need, before you need it. But the scale of that is purposefully hidden.

For example, You see your housekeeper.

You might see that there are 5 other Housekeepers on that floor, a Houseman per floor and a Special Request Delivery person, if you look closely.

You don’t see the 4-6 desk workers manning the radios so that we know when to enter certain rooms, who wants special pillows, how we manage the 3 rooms that all want service at 1PM or replacing rooms that asked for no service.

You don’t see the 6 supervisors spot checking check out rooms for cleanliness. Nor do you see the laundry teams, plural. (Sheets and Guest Laundry are separate, and Guest is split into Dry Cleaning and Non Dry Clean) You might see the public Parlor attendants, but you probably won’t see the team cleaning the pool or deep cleaning the gym sauna.

At 7:30AM every morning, the service area just explodes with activity, like you kicked two ant nests at once. 60 housekeepers on a single shift? Guess it’s a slow day.

We have three industrial scale kitchens for various purposes! Four if you count pastries! Security teams! Contact companies for large events! Teams of engineers in every specialty. I don’t even know where the IT office is, but we do have one! I’m one of the more knowledgeable on where to find items for special requests and I still find new storage rooms every other week. We found a 1930’s printing press nobody knew we had!

Its f**king wild how many moving parts there are. Flipping 500 rooms in a day while setting up for 2 $1,000,000 wedding simultaneously. Fulfilling 100 Room Service Orders while catering those weddings while running our restaraunt.

Fixing a leaky shower head in the pool while ensuring a Guest had an extra couch in their room for the kid that just loves couch beds. All of this together is called “An average Tuesday in Summer.””

GRAs are so stretched thin on time that they will clean the glasses with the same rags they clean the bathroom, after all their goal is to make the room look clean.

I worked as a GRA in a five diamond for years and there was over a year period that went by where we didn’t get a clean glass delivery. We didn’t have dishwashers in the room, so management was complicit.

This was in a five diamond, one of the top resorts in the world. Never trust glass in hotel rooms.”

Okay, now we want to hear from more folks who have worked in hotels.

In the comments, give us some more dirt about what goes on behind the scenes.