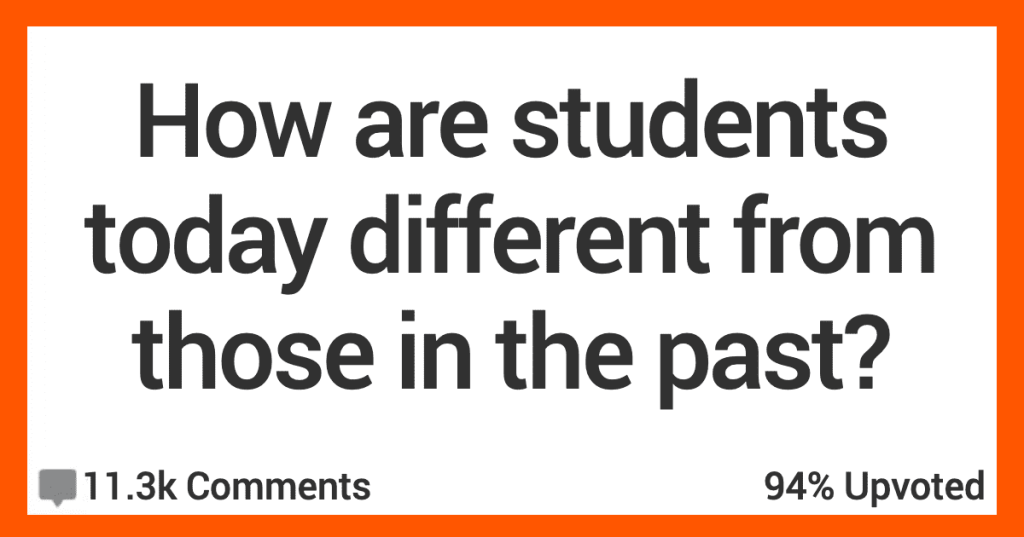 Kids today, I tell ya…

Every generation of adults says that, but there is some truth to it, because times change and kids change.

And that goes for students in schools, too.

Check out what AskReddit users had to say about the differences between schools today and in years past.

“I’m a school counselor at a middle school.

Over the last five or so years, I’ve noticed that kids know way too much about mental health and sometimes incorrectly apply it to themselves.

So many of them are incorrectly diagnosing themselves.”

There is so much access to what’s going on in the world (which can obviously be good), but you can tell when kids have been reading too much bad news. For example, each year I do an exercise where the kids predict what they think will be invented in the next 100 years.

“I’ve noticed post-COVID social anxiety: Students simply don’t socialize with people who are not in their friend groups.

I’ve always had ‘shy’ students in class, but a much higher number of students do not socialize with others as a general rule now.”

The TikTok/YouTube generation of the last 5+ years has led to more ‘point and shoot’ filming with little else. No creativity in terms of shot composition, writing a script, trying cool editing techniques.”

“Kids today — even more so than normal — care so much about appearance.

They seem to worry more about what they look like, the clothes they wear, the brands of clothing, etc, than teenagers did when I first started teaching.”

“Parents are the ones who changed the most.

Used to be if a kid was struggling you’d talk to the parents about it and the parents would listen to your suggestions.

Now if a kid struggles the parents blame you for failing and assume you’re a clueless moron.”

7. Glued to their phones.

“This is my 13th year teaching as a college art instructor. For me there have been lots of changes, but far and away the biggest is a huge decline in creativity, work ethic, and sense of exploration.

There used to be a culture of ‘studio rats’ that would be excited about trying whatever technique they recently learned and would spend countless hours in the studios making all sorts of things.

Now? If someone is in the studio, you can bet they are glued to their phone.”

“I always have at least one kid who wants to be excused to do a TikTok in the hallway.”

When I began teaching, students worked to progress in a subject. Now (I suspect internet is to blame) they see a virtuoso play an instrument on TikTok, so they pick up a trumpet and expect to be Louis Armstrong.

I constantly tell my students, ‘It takes years of work and thousands of hours to achieve at that level.’ Same goes with sports. Little Johnny or Susie is 12 years old and not trained, but they expect to be the next Tom Brady or Serena Williams.”

“Ok, I’ll be the contrarian here.

I’ve been teaching high school for 22 years now – and I DON’T see the declining behavior or attention-span trends that other people complain about.

Obviously teens are now pretty glued to their electronic devices, but I haven’t seen any meaningful big-picture changes in their intellects, processing capacity, or attention span.”

Kids are more open and willing to advocate for their mental health too.

Also, students are open to discuss enthusiastic consent and pull each other up on it — really they call each other out too on poor behavior; however, they are quick to forgive.”

“My 5th and 2nd graders knew too much without the information to make sense of things.

I’ve never seen so many children with anxiety over their futures.”

Do you have any thoughts about this?