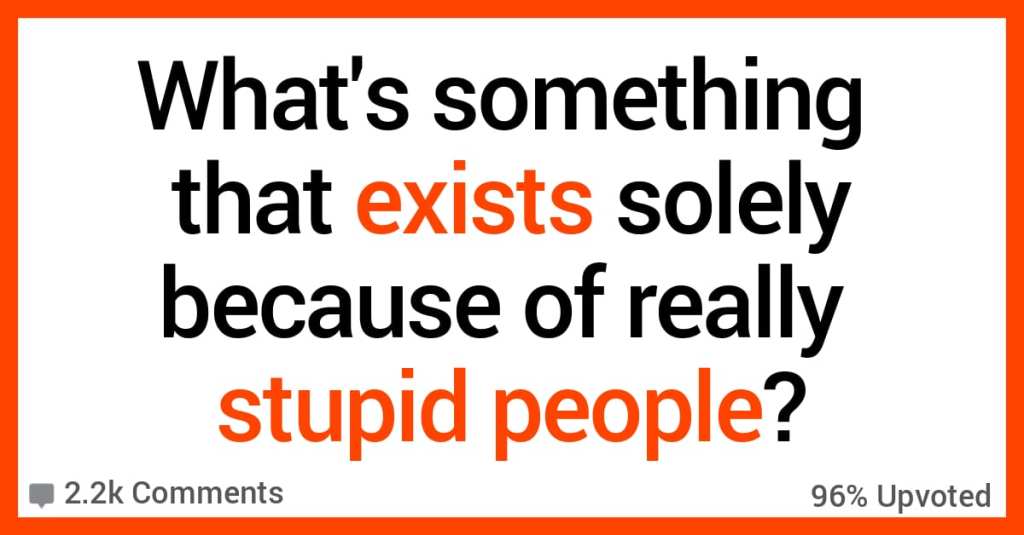 12 Things That Exist Solely Due to Human Stupidity

Sometimes we run across rules or precautions that just seem so dang obvious, we wonder why on earth they even need to be stated. Perhaps it’s for legal reasons, perhaps it’s because at some point some person made a very stupid decision.

AskReddit users share the feelings on things that exist solely because of stupid people.

1. You would think it’s obvious…

“When my aunt died I ended up with my mom and uncle talking to the funeral home advisor.

When they were discussing cremation, the funeral advisor made my uncle sign a form indicating he understands cremation is irreversible.”

“When I was arranging for my mother’s cremation, both my sister and I had to sign the paperwork saying we agreed and understand it’s irreversible.

Apparently there have been numerous cases where one family member authorized a cremation and then afterwards, other family members got upset and wanted it undone.”

2. As another user points out, he doesn’t get his powers from the cape:

“The warning on a Superman cape costume that warns product won’t give you the ability to fly.”

3. I didn’t even think this was possible

“Do not iron this t-shirt whilst wearing it.”

4. Don’t make this harder than it has to be

“The signs on a stroller that says take the child out of the seat before folding.”

5. Lest we not forget the “Tide Pod Challenge”

“‘DO NOT EAT’ warnings on everything from washing pods to slug pellets.”

“I went to a zoo, and in every animal exhibit there was a sign saying ‘Recycled water, do not drink.’

And you know that’s there for a reason.

Some stupid person broke into an exhibit to drink that nasty looking water.”

7. I don’t envy this IT worker

“My job! – I work in IT. For the love of God if you depend on your computer for your job know at least a little about it. I would say that over 80% are for silly things. Some of the calls I have taken:

How do I keep my self from deleting my own files?

What do you mean you can not fix my broke laptop screen remotely?

I am not trying to connect to the internet, I am just trying to get my email.”

“Anything an infomercial tries to sell you.”

“When I was in middle school my friends and I (like 15 12-year-old girls) basically took over a mall.

We were pretty rowdy and obnoxious. I know a few people shoplifted (not me lol), one of us threw up in the food court, and we mobbed a minor celebrity.

Now that mall splits up groups of larger than 3 kids. Oops. Sorry.”

“At my workplace, there are giant containers of soap and cleaning chemicals.

On the cart, there is a giant sign that reads ‘Do NOT drink’ in three languages, all hand written.

Apparently, before the sign was put up, three separate instances were found where the cleaning cart was unattended, and an employee tried to drink the yellow cleaning solution, thinking it was a drink cart.

Let me add the fact that the cart also has a sign on it that says ‘Cleaning Supply Cart.'”

“The tag on my pillow that says ‘Do Not Consume.’ Why is this an issue?”

I was shocked that we had to put ‘unwrap’ and insert on the label for suppository prescriptions.

After reading this, I’m a bit concerned about the future of humanity. The fact that we’ve survived this long is astounding. Thankfully, we get to learn from the mistakes of the stupidity of the people who came before us.

What do you think exists solely due to human stupidity? Let us know in the comments!