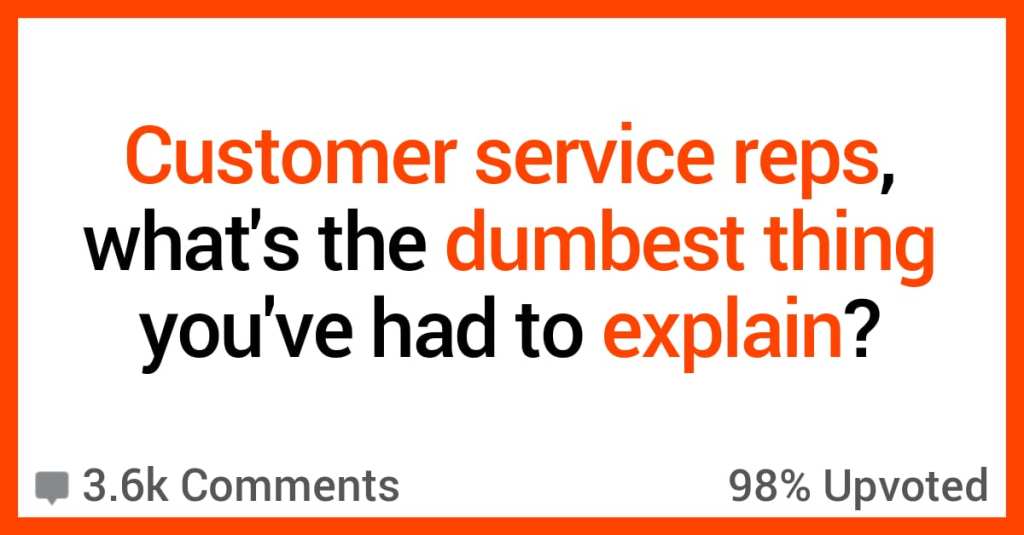 If you’ve spent any time in your life working in customer service – retail, at a restaurant, at a call center, or anywhere else that faces the public – then there is a 100% chance you’ve got an entire journal’s worth of unbelievably stupid interactions.

People, it turns out, really aren’t that smart…and also, they tend to think they’re the most important person in the world to literal strangers.

These 12 stories should bring back some not-so-great memories, but they should be good for a laugh.

That owning a fitbit does not make you skinny and today I had to explain to a couple that just because the amazon echo box doesn’t state that it uses wifi.

It will still use it as it needs it to be a smart home device.

My first job at 16 was Party City. One day, I’m blowing up balloons at the balloon counter and a lady comes up to buy some latex balloons. I ask if she wants us to fill them and she said no, she’d do it at home. Making small talk, I said oh you must have one of the party time helium tasks at home.

“No, I blow them up with my mouth. You just put the string on them and they float!”

I do the multiple blinks, trying to work out in my head what she’s just said. She fully believed she could blow up the balloons with her mouth and the magic was attaching a string. I tried to give this woman an impromptu chemistry lesson. She insisted.

I still think about that magic woman to this day.

10. This happened on Seinfeld.

9. I think you’ve found the problem.

That I couldn’t help them diagnose their internet connectivity issues if they don’t find their modem’s power cord.

I understand you want to protect your personal information but I cannot send you what you want unless you give me your address!

Here are a few favorites as a bartender:

A drink is LIQUID. Bad Idea to shake it around.

Yes, the “no smoking” sign also applies to people who are addicted.

Yes, the people on the tables around you are drunk. And No, I’m not going to kick them out. (srsly, what were they expecting when entering a bar at 2am?)

You Still have to pay the entire meal, even though you only ate half of it. (especially because they asked us to pack other half for them to take home)

No you’re not allowed to test our liquor by taking a shot unless you buy a shot.

The kitchen door as well as the backroom door are closed for a reason and that reason is not to hide “the good stuff” EDIT: I was informed by my cook that he is, in fact, “the good stuff”

Your Kid is not going to get alcohol from me. (most of the time I can kinda understand the question, as legal drinking age when accompanied by your parents is only 14 for light beverages here in austria, but that kid looked like it still went to primary school!), and I don’t care that it’s his birthday.

No we’re not running an illegal smuggling business in the back, you just watch too many movies. (also, did you really believe that I’d tell you if it were the case)

No you can’t pay in insert weird Cryptocurrency here (I’ve had that twice, AFTER explaining to them that we don’t take CC)

I don’t know your “regular”. You’ve been here twice, and one of those times I wasn’t even working.

A very pissed high society woman came to the store saying her brand new 3000 dollars Microsoft surface bought by her husband was defective because she could not get internet when she was on the move. I wondered if she had a version with a 3g/4g Sim card but quickly realized she was talking about wifi.

I tried explaining to her how wifi works and that she could not use her own wifi outside her house but could share her smartphone internet connection. She would have none of it. She said I was lying to her and making fun of her and asked to speak to my manager who then proceeded to tell her the exact same thing. She left almost screaming…

5. Everyone’s got a sad story.

My business is not a charity. We don’t give you whatever you want just because you have a sad story.

My mum once went on holiday across the country and asked me for the home WiFi password cause the hotel she was in wanted her to pay to use theirs. “But I have it at home!” She didn’t get it and thought I was being so cruel not letting her use it.

In a couple different lines of business, I’ve had women start to give me the “I’m a single mom” sob story and I say enthusiastically “I am too!” and you can see the wind go right out of their sails that I’m not going to cut them a deal out of pity.

I worked at the airport and someone wanted to go through TSA with a 2 liter bottle of Coca Cola. I calmly explained that liquids weren’t allowed through security. The man gave the most genuine chuckle I’ve ever heard and said “oh! This isn’t Coca Cola! It’s gasoline!”

My coworker beat me to a reaction cause he very loudly exclaimed “What the fuck???”

You can’t apply a coupon if you 1) don’t have it with you and 2) doesn’t even apply to wtf you ordered.

Bless the people who commit their careers to helping other humans make their way in the world – it’s not easy!

If you’ve got a great story you’re dying to share, our comments are open!