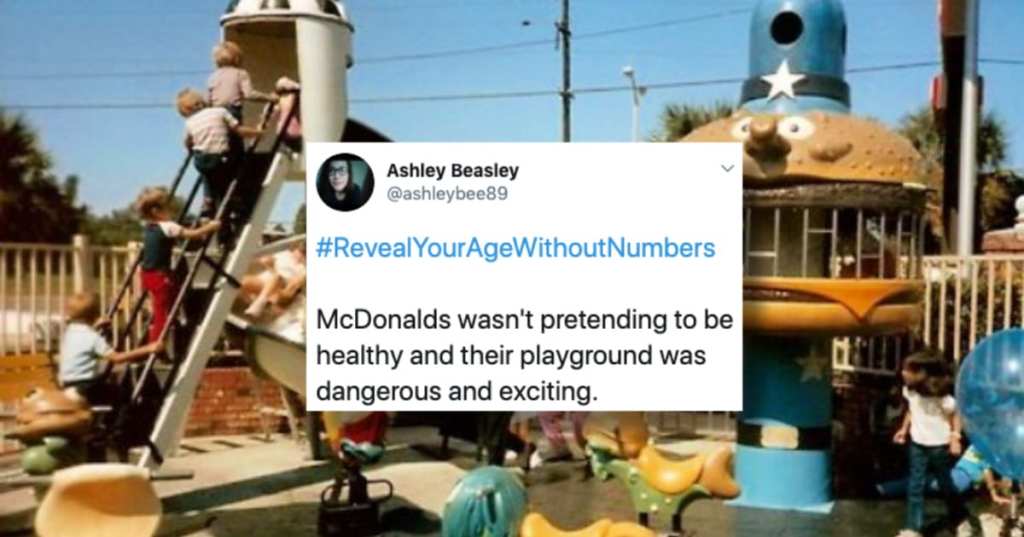 13 People Describe How Old They Are Without Using Their Age

Last week, I tweeted that I was “one of my girlfriends (named Karen) just lamented the closing of a local Olive Garden” years old.”

That’s just one example of how one could describe their age without giving away the exact number, and honestly, there are people out there doing it with way snappier humor than me.

If you’re up for that, here are 13 people who had some pretty hilarious takes.

13. It’s how we saw the Challenger explode.

I’m willing to bet under-funded districts still use these.

12. We never did feel very sorry for those ducks, huh.

I was murdering ducks a few good years before puberty. #RevealYourAgeWithoutNumbers pic.twitter.com/Q67qxvXCxH

11. This is the eating area of a Taco Bell, my friends.

It distracted you from the lack of cleanliness.

10. That game was impossible.

Don’t try to tell me it wasn’t.

this is where my anger issues began. pic.twitter.com/KK1jG7PwCA

9. We admit the skipping was a problem.

The CD, not school. The latter wasn’t a problem, per say.

listened to one of these on the school bus lmaooooo idk if that’s an age or growing up poor thing #RevealYourAgeWithoutNumbers pic.twitter.com/IBc8rbBrBd

8. Just this picture gave me nostalgia.

I can almost smell it.

6. They were seriously so cool, too.

We were shocked and awed.

These were the portable game consoles of my generation #RevealYourAgeWithoutNumbers pic.twitter.com/nVoy0g7Ep9

5. We all know nothing has changed beneath the surface, right?

Man, that slide burned the crap out of your legs.

McDonalds wasn't pretending to be healthy and their playground was dangerous and exciting. pic.twitter.com/BuWH2g7xzz

4. No, we’re not talking about the television show.

We’re talking about your FUTURE, JESSICA.

#RevealYourAgeWithoutNumbers MASH wasn't just a game but a way of life. pic.twitter.com/gtTWnh6TnR

3. You think we like cereal this much for another reason?

My cereal came with toys pic.twitter.com/Iuqhuqkj73

2. This seems like it was a brief moment in time.

It was annoying, not sorry it’s gone.

1. To be fair, these shows are still on PBS Kids.

The new ones aren’t as good, though.

I think I could ballpark most of these people’s ages, couldn’t you?

Give your own age-without-the-number a shot in the comments!