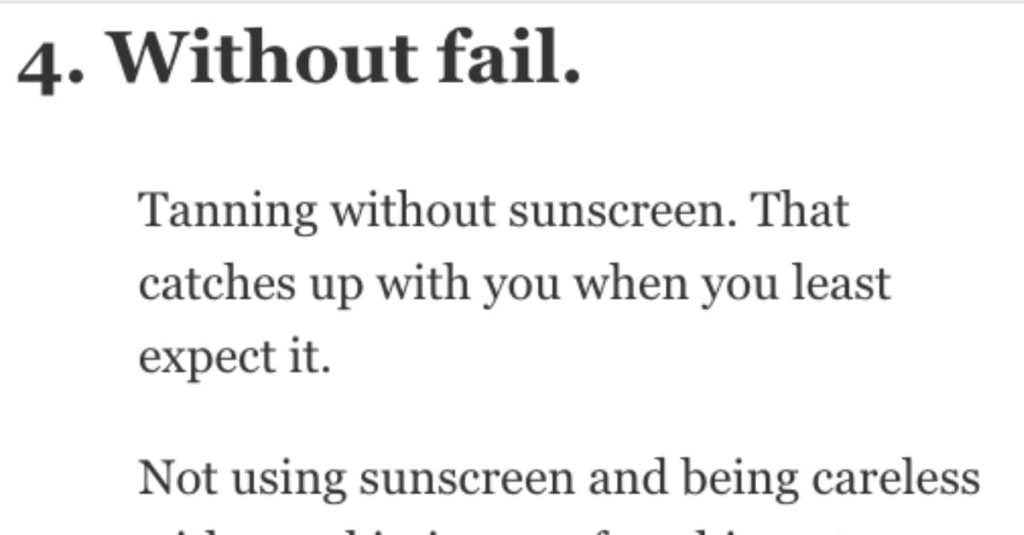 Experience is not only the best teacher, in some ways it’s literally the only way stubborn human beings figure out this thing we call life. There are things you just can’t know until you know, for better or worse.

There are some pitfalls you could probably avoid, though, if you’re willing to listen and don’t assume you know everything already – so if you’re in your twenties, you might want to peruse this list of mistakes that don’t have to be made.

Pay yourself first. Don’t work the rest of your life.

12. There’s no prize for getting there first.

Life is not a race. It doesn’t matter who’s getting married who’s moved out from parents house who has a kid. You go at your pace. Don’t think you’re behind anyone else.

Not eating right and exercising. The heart attack you have at 50 doesn’t just magically show up. Cardiovascular disease is from years of buildup.

Until I was in my early 40’s I had never run more than 2k at a stretch, was desperately out of shape, overweight and just felt really prematurely old.

I started running and cycling and eating somewhat better when I was about 43. I honestly feel healthier, younger and am definitely way fitter than when I was in my twenties. I also lost that excess weight and just have lots more energy now. A couple of months ago I ran my first marathon, at age 56.

The funny thing is, I hate running. I’ve been doing it for over a decade now but I’ve never enjoyed it. Not for a single minute. But I know what it does to me, which keeps me going.

I am 41 and still smoke. I hate it and am terribly terribly addicted to cigarettes. Biggest mistake of my life was starting at 15.

9. It really does make a difference.

Not getting enough sleep or not having a good sleep schedule.

If and when you can (because money and insurance), get a sleep study! I had terrible sleep patterns through my 20s, did all the tricks you see online. Got a sleep study in my 30s and found two undiagnosed sleep disorders.

It’s a whole new world. You’ll never be able to sort those things out on your own. Sleep makes ALL the difference.

Savings, 401k whatever just invest for yourself.

I told my wife to sign up for when she started her first job since immigrating. It’s been 6 years and she’s got a nice little wad of money socked away.

She’s been telling her coworkers for the past 5 of those 6 years that they should sign up, because the employer match is free money. Plus it earns more by compounded growth. They all say they don’t want to.

She shrugs and says okay.

7. It really is a slippery slope.

Binge drinking. It’s a very easy spiral to go down if you aren’t careful.

I never thought I was an alcoholic, drank anywhere from 1 – 3 times a week. Then Covid hit, and between the stresses of that and the boredom, I started drinking most days. Started to get pains in my right side a few months after my 30th birthday.

Ultrasound showed early stage fatty liver which left untreated can turn to cirrhosis. Fucking liver disease. Haven’t had a drop since I found out. Lost 50lbs, have much clearer mind, and money in the bank. Makes me kick myself a little for not starting this sooner.

6. You can still have fun at concerts.

This comes under ‘looking after your body’ I suppose, but it’s a specific one that is still little known:

Wrecking your ears with excessive noise exposure. Even if you don’t care about losing your hearing, you don’t want catastrophic tinnitus. It’s completely disabling. And nobody tells you that you can get it years or decades after the noise exposure. I just thought, “I’ll knock this off before it gets too bad.”

Not making tiny changes and sticking to them! I know that I had an all or nothing attitude in my 20s.

If I tried my hand at painting and my first few attempts were crap, I’d drop it. If I tried saving money and saw how little it was, I’d spend it.

You have to do little things everyday and just don’t stop. It’ll add up in your 30s and you’ll be so grateful even later.

The problem is – many 20 year olds think of 30 and above as not counting somehow. They can’t imagine not being a complete success in their 20s or not being in a perfect relationship in their 20s.

But life goes one. Your 30s are freeing and you’re in a whole different mental space from then on.

Don’t get desperate and stay with an awful person just vecause you’re so ‘old’ and unmarried at 29. Or make decisions that ignore the rest of your life.

Don’t quit studying or learning just cause you’re out of college. If you want a career change, don’t not do an onlieb course or start working towards it because you’ll see a result 5 years from now.

That 5 years will pass and you’ll wish you had done something.

Tanning without sunscreen. That catches up with you when you least expect it.

Not using sunscreen and being careless with my skin is one of my biggest regrets at 32. I smoked cigarettes, drank heavily, ate like shit, and didn’t use sunscreen.

In your 20’s, you just bounce back with hardly any physical consequences and you feel like you’re going to be young forever. All of a sudden, I woke up one day with wrinkles and skin damage that I can’t reverse and is only going to get worse from here on out.

I am still having a hard time accepting it, and it causes a lot of depression and regret in my current life when I look at myself in the mirror.

Credit and debt, it’s too easy to buy things you can’t afford.

I wish I understood this in my 20s. I was very careless with money

As you get money you tend to take out credit to get nice things. A sudden change in your career can ruin your life for a while. Be careful about buying things you can’t pay for outright.

I think mistreating your skin overall though. I think that emphasis on skin health should be a bigger topic of conversation. Everyone talks about exercise and brushing your teeth, but nobody talks about sunscreen use, hydrating and nourishing your skin, etc.

For a while I thought that getting a bunch of creams for my face was too feminine and wasn’t necessary, but with college and just overall stress I started to see my skin look more tired and worn out and dull. So I decided to try out a Korean skincare routine and I will never go back to not taking care of my face or skin in general!

Treating their body like it’s a rental. Look after it. You will be living in this body for many years to come.

Don’t burn out the clutch by 27 and live with the consequences for 60 more years.

I wish I had heard some of these (or listened when I did) when I was younger.

What advice would you give your twentysomething self? Tell us in the comments!