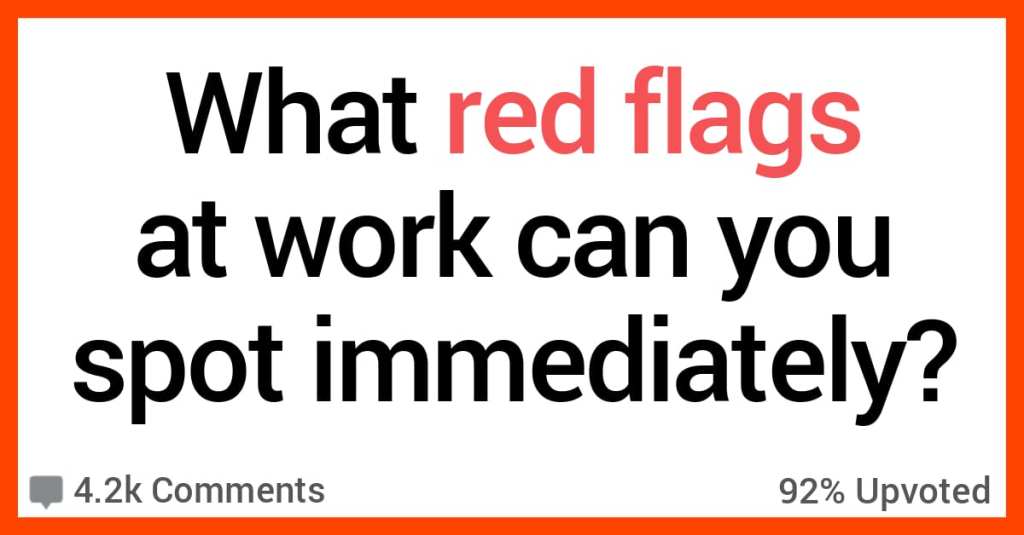 I once had a job interview and after I’d been hired, I was given a tour of the place and met the other employees…and that’s when I knew that job was gonna be totally f**ked and that I wasn’t going to be there very long.

BUT, I needed a job for the time being and so I toughed it out for a few months before I found something else.

But still, I’ll never forget that uneasy feeling I got from a few of those folks and I could just see it in their eyes how miserable they were at this place. Ugh, I never want to have that feeling again.

Buzzfeed users discussed subtle red flags you should keep an eye out for at your job.

“One of the managers went on a rant about how he h**ed it there and said to me, ‘I mean, you surely don’t want to work here forever, right?'”

“Graduated college during financial crisis, no one was hiring.

Took a ‘marketing’ job where you would go to a different Home Depot every day to try to convince people to have their kitchen cabinets refaced as an alternative to costly new cabinets.

You basically harassed people while they are shopping for a free in-home consultation, and only got paid if one was set up. My ‘mentor’ said, ‘Not everyone is cut out to work hard and get rich.’ In hindsight, almost certain it was a pyramid scheme.”

“I worked at Enterprise for a couple years.

All management cares about is selling people the coverage. And if you didn’t sell enough extra coverage, you had to attend ‘training sessions’ after hours.

It was unpaid at a centralized branch, which could be an hour away for some people. The training sessions were basically how to scare people into buying it.”

“I worked at an alarm company, where you’d sell door-to-door.

The reps had a game of taking something of a particular color from someone’s house each day to display in the office.

That day was orange, and one day, I saw them take a crab fridge magnet from someone’s house.”

“I had a manager pretty much humiliate me in front of everyone with every chance she got, but was nice to everyone else.”

“During my first week, one of my fellow employees said they didn’t know why I was hired because we didn’t have hours to spare.”

And they kept track of the time.”

“My sister worked for Kirby vacuums as well and quit when they wouldn’t allow her to use the restroom, so she ended up urinating herself.

She never got paid either, despite working almost a week of 12-hour work days.”

“I once took a ‘temp-to-perm’ job (as in, if they liked me, they’d keep me) for a couple of weeks as a receptionist at a brokerage firm.

The nice, old avuncular senior partner made a r**ist joke to me. Guess he expected me to laugh, or at least suck it up.

I just said, ‘My fiancé is Black’ and walked out of his office. Needless to say, they did not ask me to stay, and I wouldn’t have accepted if they had.”

10. Wash your hands on your own time!

“My first job was at a movie theater, the manager h**ed me from the first day because while he was ‘training’ us, he asked us to handle some food items and I told him that we should wash our hands first.”

“I worked at a Waffle House for like 30 minutes once.

I had never even been inside a Waffle House and had no idea what it was like there. It was just me and the line cook/waiter/only staff member present.

He was s**king a c**arette on the line, while telling me about what you can do to make a good hash brown. I was 18 and noped out of there.”

“I had a family emergency — my grandma had ended up in the hospital and she was very unlikely to live.

I texted my manager that day to tell him I couldn’t come in and that I was really sorry, but it was a giant emergency.

I had given him all the details, and the text I received was, ‘I need a picture, or it’s your last day.’ Yeah, no way I was gonna send him a picture of my d**ng grandma.”

“I once started working for this weight loss company.

One of the first requirements was that you had to go on their weight loss program (that wasn’t a big deal to me, but I was required to buy their food products as well, lame). I lasted in the training three days before I refused to go back because on the third day, we were told to memorize a script for when we would talk to customers, and the script was fairly long, and I struggled with being able to memorize the lines because I was nervous.

The trainer made fun of me first for not being able to memorize the script, and then started yelling at me as I got more and more flustered. I started crying, and she told me I was weak. Later that day, the same trainer told me I looked fat in the wrap dress and legging outfit I was wearing.

I finally had enough I flipped the trainer off and walked out. Glad I didn’t stay, the company was shut down a few months later.””

What do you think are red flags you need to look out for at work?