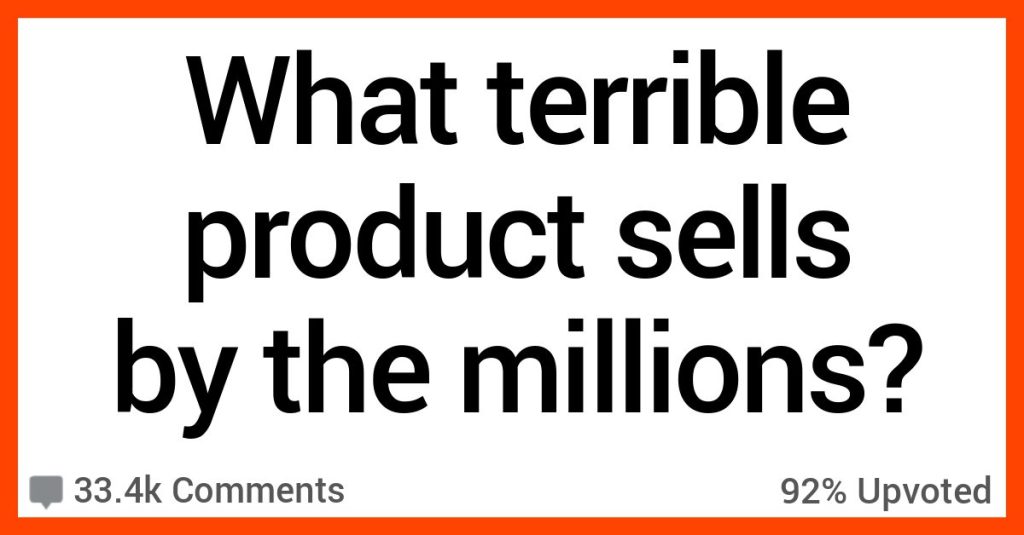 13 People Talk About Terrible Products That Sell by the Millions

Have you ever spent your hard-earned money on a product that is really popular and once you got it home you realized it was terrible?

That drives me nuts!

And I bet you’re not much of a fan of that experience either, are you?

And we both know that it happens all the time…

People on AskReddit shared the popular products they think are terrible.

They do nothing, are unregulated, cause people to actually eat even more since they think they’re offsetting it with the diet pills.

I’ve also seen studies that suggest that knowing a food is light or low-fat/sugar/carb makes people eat more than they normally would because of the subconscious “this isn’t as bad for me” effect.

Madden, and NHL go through the same stupid bulls**t every year.

I haven’t played much of 2K NBA, but it sounds like the same thing is starting to happen there too.”

Most of them are made out of the cheapest steel they can get away with, and hung with the cheapest parts they can find. And then they’re assembled in a back room by some dude that has no idea how to set up or build a bike.

As a bike mechanic, we see them come in new all the time, and need work that amounts to almost what the bike cost in the first place.

We should stop digging for and just use lab-made ones.”

The headphones are so cheaply made that they put weights in them to make them feel higher quality.”

“As someone who drinks coffee black, Starbucks is some of the most disgusting coffee I’ve ever had.

I’d rather just fill a cup up at a gas station or deli.”

People pay top dollar for a bottle of s**tty chalk with maybe one molecule of the active ingredient. Looking at you Australia, with your shelves and shelves of the crap. No I don’t want 35X valerian root or some crap, I want s**t that works.

But nooooo can’t just put that stuff on the shelf, people will steal it and make oodles of M**H!!! Nope! have to ask the chemist for it and hope to hell it doesn’t require a prescription.

I may be salty but companies that make homeopathic c**p should be illegal.”

Might as well be a bag of sawdust and broken glass.

They had a huge bin of them at some store i was at on clearance. Even for $1 they weren’t selling and had 100’s of them.

I checked it out and it wasn’t even worth the $1.”

9. Messing up the market.

“Fixer-upper houses. I looked at houses in a fairly small market and the prices are outrageous.

Houses that need $60,000 worth of work are sold at a full price and people just happily hand over their money. It f**ks up the whole market.”

“Gillette razors and any other razor brand that does the whole “more blades must mean a better shave”.

You’ll be better off with a safety razor any day of the week. Think about it. What’s better for your skin running 5 blades over it or just 1 blade. Plus most of the time you will have to run the 5 blades over your skin multiple times.

Not only is a razor with 1 quality blade, like a safety razor, a better option it is also way less expensive.”

You are literally just buying disposable plastic with mediocre quality water that can easily be achieved from tap water or a filter.”

First off, I have no ill will towards anyone who adopted a pug. You are a lovely wonderful person for giving that little boo a good pampered life. I appreciate anybody who makes the effort to caring for a dog like family. My issue is with pug breeders.

They’re not a naturally evolved dog breed, they were selectively bred to have flatter faces and bigger eyes over the last few centuries. What resulted is an animal that not only couldn’t survive in the wild, but an animal that cannot survive without humans’ modern medical intervention.

Pugs suffer from a myriad of significant health complications their entire life, they really struggle just to exist, and it’s pretty sad to think millions of these animals were born into these deliberately manufactured genes because they look so cute.

Again, if you own a pug, no judgement. Obviously. I’m not going to be a d**k and shame people for loving their pug. Quite the opposite. I’m certain they put a ton of effort and money into giving that little love muffin the best possible life, like any member of the family, and I hugely respect them for doing so. But when that sweet angel fulfills its life and gets its wings back, I would recommend a bit of pause before the replacement pug.

You could just try a different toy breed, not only to reduce the demand for more pug breeding but just for the variety in dog owning experience. You can get a pug cross-breed, which would reduce the amount of health complications they have.

Or, you could do some in-depth research and become a part of a pug breeding rehabilitation initiative, which is a growing association of pug breeders trying to genetically undo the health complications that have arisen over the last couple centuries.”

What products that are really popular do you think are terrible?