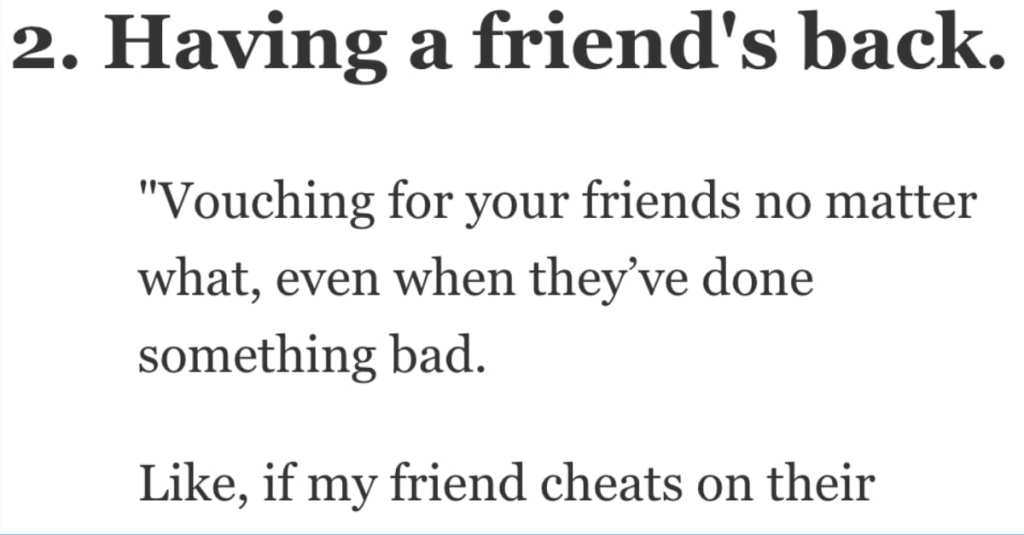 Real Talk: There are so many things that are called romantic in books and movies and songs but, when you apply them to real life, are nothing but creepy and/or toxic.

Singer and songwriter Naya Ford took that truth head on during a TikTok video, asking her followers to weigh in on “something that people glamorize that’s actually just extremely toxic.”

She began with “I want a significant other who is rude and mean and not friendly to anybody” because that somehow means they won’t cheat, and her followers really piled on.

Below are 13 great answers!

13. That women can fix broken men.

“The idea that broken men can only be healed through the love and labor of a woman. This perpetuates the idea that men cannot find healing or support from anybody except for women — which means that they don’t seek it from their friends, they don’t seek therapy, they don’t have connections outside of their [female] partner to support them. This obviously puts a huge burden on women to care for men, heal them, rehabilitate them. That same energy is not given to women.

Also, if you want an example, I recommend looking at almost any movie targeted to teenage girls that is about a ‘bad boy’ (the pure, loving ‘good girl’ heals the wounds of the tortured ‘bad boy’ trope).”

“YouTube couples who do pranks — they’re so obvious that they’re doing pranks, and they just get more and more extreme with…embarrassing each other on camera.”

And look I am guilty of it too. I used to make jokes about it until I realized I actually had a problem.

“The way that we romanticize getting our heart broken and then forgiving and getting back together with the person who broke our heart. That dumb notion of ‘you always hurt the one you love’…If somebody cheats on you, lies to you, manipulates you, that is called emotional abuse. And there’s this media depiction that all it takes is the right grand gesture and then everything is resolved — it will never happen again, and you should forgive them. I’m not saying redemption isn’t possible because every situation is different, but that’s not romantic — that’s called work.

And if I have to watch one more gosh darn movie where we sympathize with the person who did the abuse, and we look to the person who was abused asking them to forgive them to suit our romantic narrative. … It is not glamorous, it is not romantic; it is abuse, and we need to stop idolizing it.”

9. Being in a relationship.

“By no means am I saying that relationships are toxic, but what I am saying is that society and social media’s obsession with relationships — yeah, that’s not healthy at all. It’s as though everyone is more focused on the cute pictures, the matching outfits, and being able to say you have someone than actually accessing and considering ~who~ you have.

Daniel Sloss said it best…: It’s people out here trying to force things that shouldn’t be forced with one another because they would much rather have somebody than nothing at all. Like…there are really couples out here who don’t need to be together, should NOT be together, but they stay together because their cute couple pics go viral. And the obsession promotes the idea that being single is a flaw. It’s getting weird!”

“Gender norms. Blue is for boys, pink is for girls. Girls show emotion, men do not. Women are feminine, men are masculine.”

“The modeling industry. I’m surprised to this day, it’s still glorified. It’s such a toxic industry, people get away with so [many] atrocious things in that industry because they have power and control over your work, your body, and so many other things that you renounced when you started your career as a model.

Like, they don’t prepare you to be objectified, s*xualized, and preyed on by predators. Played by people you trust, told that you’re not good enough, [and] expected to be of a standard that you will never attain. Jeopardizing your self-worth and mental health at their expense for them to make money off you. It’s such a problematic industry that we need to stop glamorizing it…

Please don’t…be something you’re not and let people (who don’t care about you) dictate what you should (or shouldn’t) be in this industry. If you start out, do you.”

“Having kids. No wait. It’s not toxic in its entirety. There are aspect in it that are really toxic hear me out. Having children is glamorized and prioritize over very necessary pieces of actually raising children.

People are not addressing their past traumas, they not addressing their stability, mentally, physically, financially. All of these thing are taking a back seat to an idea bringing children to this world and having a baby shower, and having a gender reveal, Both the children and parents are forced in this reality that they can’t recreate their favorite TV show family.

The life is very real but having children are glamorized and the kids will group with not addressed traumas and repeat the cycle.”

“Bloggers who have the perfect morning routines with their kids and they cut up all the little lunch into bento box with the love notes and a shaped apple with an octopus and their house is cleaned and they are dressed.

“Diet culture and the idea that your value and morality is tied to how much you weigh.”

“The idea that you guys need to be obsessed with each other when you’re in a relationship…Apparently we have to text each other every day — all day long — and if we don’t text back within a reasonable amount of time, or we don’t explain why we didn’t text back, then all of a sudden that means we’re not into you anymore. If you’re not texting each other, then you’re probably on FaceTime until your phone dies or on FaceTime until you fall asleep. And some people like to be on FaceTime while they’re asleep, which is kinda weird…

Basically dedicating all your time to your significant other — that’s kind of unhealthy. ‘Cause imagine you dedicated so much time and energy to a relationship that you had nothing else going on in your life. You’re gonna feel so broken if that relationship fails, because you got way too attached.”

“Vouching for your friends no matter what, even when they’ve done something bad.

Like, if my friend cheats on their partner, and they expect me to lie for them if their partner calls me and asks where they are, I’m not lying for you and your [bad] behavior.

If your partner knows me well enough to have my phone number and ask where you are, why would I want to participate in lying to them? Obviously there are worse things, but it’s a no for me.”

Don’t be fooled, y’all – if it seems toxic, it probably is!