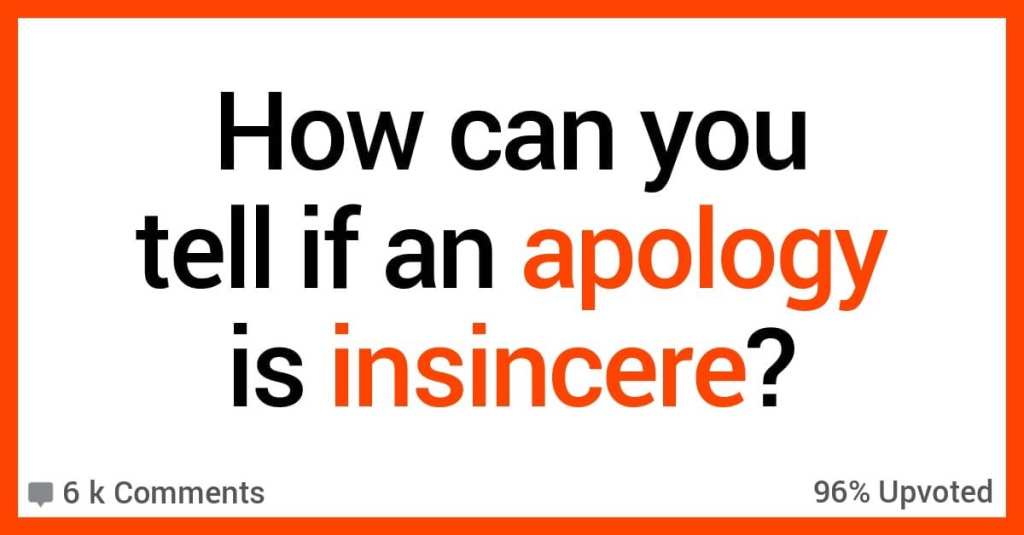 Apologies are woven into the fabric of society. It takes time to learn to give them well and to give them every time they’re warranted, but if you can, both you and the people around you are going to be a lot happier and healthier for it.

That said, some people aren’t even trying – and if you encounter any of these 13 apology red flags, you can assume it’s bogus.

The word ‘but’. It never needs to be present in a real apology.

“I’m sorry. I did the things for these reasons. They were bad reasons and I was wrong. I won’t do it again.” vs

“I’m sorry but I meant well, so it’s not really even my fault.”

12. Those are not actually apologies.

“If anyone was offended…”

“I’m sorry but if you hadn’t done what you did, I wouldn’t have had to do what I did.”

All apologies that are truly and fully sincere need to include, in some fashion:

1) Acknowledgement of the offense

That is a basic, complete apology (see book, “On Apology”)

When they follow up the apology with a list of reasons why it isn’t actually their fault.

I agree with the first one but the last two could be because someone is autistic or in general neurodivergent to an extend.

If you hear someone say “go apologize”

Depending on the age of the child, that’s just training them to know which contexts call for which manners. It’s not super important that they know why, because it needs to be taught before they have the capacity to understand why society has manners at all. This is not to say, that it shouldn’t be explained, just that the explanation is actually pretty complex.

“I’m sorry for everything.”. That is the apology my ex told me when I wouldn’t take him back and refused to text him.

How about an actual explanation of what you are sorry for then?

“Oh my god I can never do anything right. I’m such a fuck up.”

Basically anything that turns it back on you or makes it sound like they’re questioning your feelings, even if you’ve made it very clear you’re upset and why.

They talk about them selves and tries to make the person feel bad for them. “ I’m sorry for what I did but blah blah blah has been effecting me lately”

They yell “NOT” at the end.

Having grown up during the height of the …NOT craze, I hate that. It seemed like every third line anyone uttered was followed by a pause and then “NOT!!!” That needs to die out completely.

3. What about your actions, though?

“I’m sorry you feel that way.”

“I’m sorry you took my words the wrong way.”

Any apology that expects you to forgive right away, or say “It’s OK.” Sometimes it’s not OK, even if the apology is genuine. A true apology means you’re really sorry; it doesn’t mean you expect them to react a certain way.

2. They need to care at least that much.

the inability to actually address, show, or acknowledge the thing they’re apologizing for that happened.

If it’s all vague like “my actions yesterday…” or “my words I said to a colleague…” or “the events that took place…” I guarantee you it’s bullshit and it means nothing. They still are trying to keep a grip on their ego because they fear more people learning what they did and more people coming after their ass, so they can’t say what it is that actually occurred, knowing that it would crucify them.

In order to actually show you feel regret you have to show humility. Humility is the biggest part of apologizing and so few people seem to understand that. They think apologizing is about making somebody else feel better enough to stop hating them and even worse- that they are obligated to forgive them, and by apologizing they’ve done their part and are free to “move on”.

if something they said was really racist or something, or their actions viscerally disgusting, or so on, and they’re afraid to actually say it because it’ll make things worse or make people who weren’t involved/didn’t know hate them, then it shows they haven’t properly grasped the fallout those actions had on their victims, which I guarantee you was worse.

Own up to your mistake and show humility or no one can ever trust you to control yourself. You’ll only ever obey what might look bad on you otherwise, not what actually improves things.

1. The windows to the soul.

Their eyes. You need a good baseline for comparison, but compassion, hurt, and embarrassment are good indicators of a true apology.

Not having those doesn’t necessarily mean they aren’t sincere, but it’s a good indicator with other things shown in this thread

Reading people is such a skill. I need to work on it!

What are your apology red flags? If they’re not here, let us know in the comments!