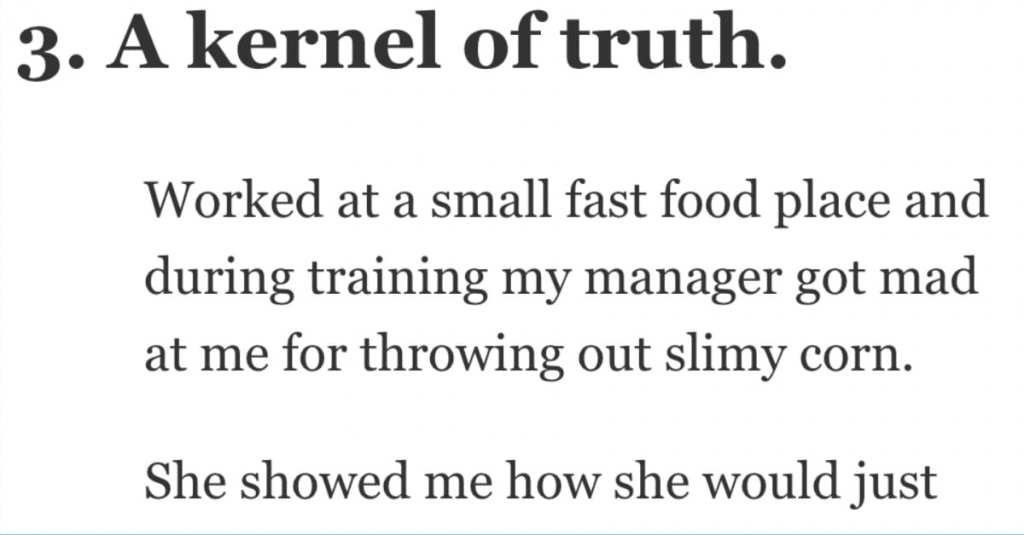 Obviously, when we’re going out for some (relatively) cheap food at a joint where you go through a drive thru or order at a counter, we’re not expecting to get gourmet or healthy fare.

That said, most of us hope, at least, that what we’re putting in our mouths is going to be what was advertised, and won’t be, you know. Gross.

If you really want to avoid any nasty mishaps in the future, listen up – these 14 employees are telling you what you should never, ever order.

When the cheesecake gets low you’re supposed to fill it up a certain way where the new cheesecake goes on bottom and what’s left of the old stuff is put on top to ensure it’s used first and it all stays fresh. Well let me tell you that shit is like a brick after it’s been in the container long enough, you constantly take it out and put it back so it’s always thawing and refreezing and essentially freezing together.

This is why absolutely NO ONE rotates the cheese cake. I once dropped the cheese cake container onto the tile and the chunk in bottom cracked in half and came out…. it had become almost like 98% mold. We’d been using it without rotating it for months

Former BK employee of 6 years here. The food was actually good if it was fresh. The issue is the staff/management. Sauce bottles would never get completely emptied and cleaned. People wouldn’t change their gloves between doing different tasks, or would be texting with those gloves then make your food. Also, all the items that go into making your food (lettuce, cheese, etc) was all tracked via time stickers (think a little clock).

So if you brought out new cheese, the rules were it could only be left at room temp for 4 hours. If you brought it out at 12, you’d mark the sticker for 4PM, at that point you should have thrown it away. Well that never happened. Everything got stickers replaced to make sure they were always good in case of surprise inspection.

Whenever I’d train people I gave a few rules to live by:

From a customer perspective, always order your food with a slight modification (light Mayo).

This will ensure your food is made fresh instead of you getting one that has been made previously to speed things up; however, can’t guarantee the food it’s being made with is fresh.

My bro managed a Weinerschnitzel.

Unbelievably they catered lunch for a few local high schools. (As did Ameci’s Pizza). The chili wasn’t up to school standard and they had to add more meat to it in order to pass LAUSD code.

Of course they used old burgers, dogs, and expired ground beef from the freezer. Bro bluntly told me, “Never eat our chili.”

So I’m a rat guy. I block them out of restaurants.

I was doing my thing one night, and the restaurant owner is on the phone, trying to get his fryer filter repaired. He told me he’d been trying for weeks but the co was booked solid.

I’ve got a degree in engineering, so I said I’d check it out. I managed to get it apart, and get a look inside.

Inside were two large dead rats, or what was left of them, bones and fluff mostly. They had got in the machine via the purge pipe, and got stuck inside.

So for probably a month or two, all the fried food from this establishment had been cooked in oil that had been filtered through two rotting rats…

I worked at a pizza place that was infested with roaches, especially in the back room where we would leave the pizza dough out to sit.

We would also find roaches in the ice maker, in the mechanical parts as well as the ice itself.

If a restaurant has roaches nothing is safe.

8. If they wanted homestyle chicken they’d go to Chick-Fil-A.

7. It’s such a good sandwich, though.

When that Popeyes spicy chicken sandwich came out with all that hype I gave in and decided to try Popeyes for the first time.

Walked inside to see the filthiest eating establishment I’ve ever seen, stepped on two massive roaches that crunched beneath my feet and a trash can overflowing to my right.

I’m ashamed to say I still proceeded to order the meal lol.

6. They can survive anywhere.

Did a month at Golden Corral during my senior year of high school.

Roaches. In. The. Meat. Freezer.

I won’t eat at Bobby’s Burger Palace because I had to go into the kitchen once (my job doesn’t involve food but this particular instance required going into the kitchen) and there were full Roach traps everywhere.

I also saw an employee grab a knife from what looked like a dirty container of haphazardly strewn about kitchen utensils, start chopping lettuce without washing it, and then scraping the knife on the edge of a trash can to remove excess and go right back to chopping.

I worked for Noodles & Co for a few years and I would honestly eat everything on the menu. The sauce ingredients come from a corporate kitchen and get combined/made to order, the veggies were prepped fresh twice a day or more if needed and tossed at the end of the day, we pulled out all the kitchen equipment and deck scrubbed constantly.

I’ve been fortunate to work in restaurants I wasn’t embarrassed by for most of my working life.

Worked at a small fast food place and during training my manager got mad at me for throwing out slimy corn.

She showed me how she would just rinse the slime off in the sink and put it back. I find corn suspicious now.

2. Not all places are created equal.

Cleanliness and not serving bad food varies from store to store. The Taco Bell I worked at took pride in our cleanliness* and we followed food safety rules. During down times we’d get lent out to other stores. We came back from some and we were all “dude. Never ever eat there”.

*We always passed the health Department inspections with flying colors. The only points we ever got taken off for was once not realizing that they had changed how far off the floor shelving had to be and our sprayer nozzle was too low. Considering the inspections were always a surprise, that’s pretty damned good.

1. No one cleans those things.

I was a shift supervisor at a fast food place and years later, I still refuse to eat anything with ice cream in it.

The machine we had was always covered in mold and spoiled cream while the owner’s “fix” was to scrape off a layer of mold and spray some clorox on it.

Welp, I think I’m going to be cooking at home for awhile, how about you?

If you’ve worked fast food, drop your own warnings in the comments!