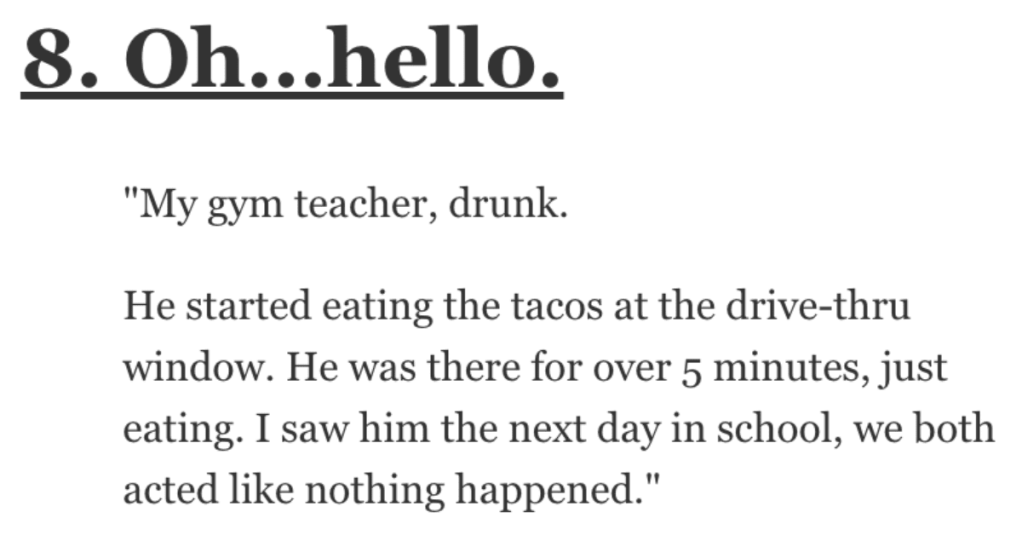 The closest I’ve ever come to working at a drive-thru was when I used to work the window of a food truck in New Orleans.

And let me tell you, that was A BLAST.

So I can only imagine what it’s like to work the drive-thru at a fast food place…it sounds like a non-stop adventure!

Let’s get crazy with drive-thru workers who shared their stories on AskReddit.

“Dude had a full on s*x doll dressed up in his passenger seat.

Sunglasses, dress and even a hat. I couldn’t even tell it was fake until I asked for their order.

Coworker and I looked at each other simultaneously and we both said “was that a s*x doll?”

This is in a “wealthy” area of my city as well so it was definitely a first.”

“Only worked drive-through for a year but the weirdest thing I saw was an alpaca in a minivan.

They asked at the window if they could order some apple slices for the alpaca. I just gave them two packs on the house.”

“Had a guy consistently come through the drive thru with his p*nis out and showing the young girls running the windows.

He would always order the same thing, large Mellow Yellow no ice, always on a Sunday, and always wearing military fatigues. Then he stopped showing up for a bit, we called him Private Peters, as our little sign to call the cops if he showed up again.

A month later we get an order for a large mellow yellow no ice, so I decide to take over the window because had a 16 year old running cash and sure enough he hands me his money with his d*ck in his other hand.

We convinced the car in front of him to stay in the lane and we called the cops, he got suspicious and left but they caught him and was charged.”

“A car pulls up, and all 4 people are just completely naked, just casually chilling.”

“I heard a blowj*b taking place over the headset.

It was a location open 24/7 so we had to reset the tills for 10 mins every evening at 11pm so people would just sit in their car & wait.

Most people don’t realize that we could hear everything, the speakers don’t turn off while the vehicle is there.”

“Someone threw a fish at me once.

Didn’t order anything, just a drive by fish attack.”

“Someone pulled a gun on my brother because the salsa containers weren’t completely full.

You can get as many as you want for no extra charge.”

He started eating the tacos at the drive-thru window.

He was there for over 5 minutes, just eating. I saw him the next day in school, we both acted like nothing happened.”

“Had a customer come through with a giant grandfather clock in the back seat. The thing was so huge it was sticking out the side window, which just so happened to be on the left side of the car.

Which meant dude couldn’t get close enough to the window to reach his food and had to step out, cursing the whole time.”

“I worked at a Tim Horton’s and once saw an old lady with like 50 cartons of eggs in her car.

I made a joke saying “looks like you could make your own breakfast” and she got real straight faced and said “oh honey those aren’t eggs”.

“Two guys were hotboxing and decided to come to the drive thru.

They did not stop smoking even when they pulled up to the window. I swear a cloud of smoke rolled out the window when they lowered it to pay.

They offered me a hit and I politely declined.”

“I was working the drive-thru at Burger King in a snowstorm. Driver orders a coke with no ice.

When I hand them the coke, they empty it a bit, break off a couple icicles hanging from the car, put in the coke, and drive off without saying a word.”

“The entire car was filled with trash.

Like legitimately up to ceiling in the back seat and up to shoulder height in the passenger seat.

I was so stunned I nearly forgot to give them their food.”

“A woman drinking a tall boy of Budweiser. It was 530 in the morning at a Starbucks.

There’s also a guy that takes his 3 dogs for rides. They ride in buckled seats and wear goggles so the wind doesn’t hurt their eyes.”

Attention, drive-thru workers of the world!

Tell us your wild stories in the comments. Thanks!