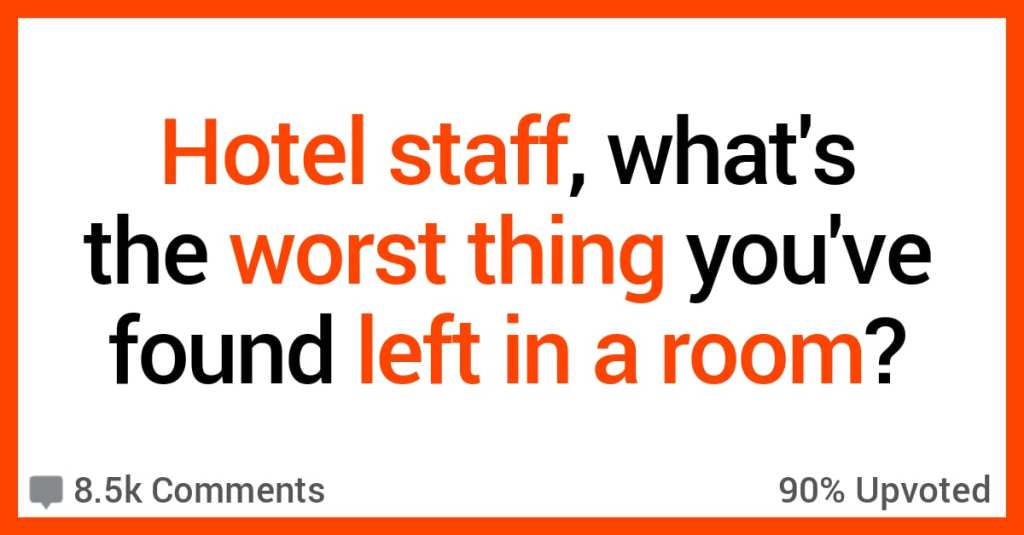 14 Hotel Staff Tell the Horror Stories of Rooms After Checkout

There are no perfect jobs in this world, and I’ve gotta think that any job where you deal with a cross-section of humanity is definitely going to have its pitfalls. Most of us stay in hotels from time to time, and while we probably realize they’re not necessarily the cleanest, we also don’t really know what the cleaning service finds behind closed doors.

If you want to know, read on – but I won’t blame you if these 14 stories are just too much to handle.

14. It was probably worse than you’d think.

Worst to clean up, not because it was gross, but because it was annoying and time consuming, was popcorn. A baseball team stayed in a couple rooms and I guess they had those like caramel popcorn balls?

That they had just thrown all over the room. At the walls, furniture. It stuck to the carpet and was almost impossible to vacuum.

A usb drive with two different versions of their obituary that they typed up for themselves.

12. You want to make sure that’s protected.

Not a hotel worker but once stayed in a resort in the Dominican where someone had shit in the safe. Or I guess carried their shit to the safe? Not sure.

Either way, I guess the staff hadn’t checked to see if anything was in there when cleaning after the last people.

Not a hotel worker but I found a webcam in the air vent.

Not me but my dad. He was the director of housekeeping for a worldwide hotel chain. His housekeepers didn’t know what to do with a girthy 12-inch d**do suction cupped on the writing table. It was “still very moist” he said.

Then he looked up who stayed in the room to see if maybe they wanted it back but it was 2 tiny, frail little old ladies (canes & all) and he said it was too embarrassing to contact them so he waited a bit to see if they’d call asking for it but they never did. He ended up throwing it out.

People that have died, feces on the walls and furniture along with vomit, drug paraphernalia, drugs, and once a gun.

Feces and vomit is the worst though.

8. I have no idea what to say to either of these stories.

A friend used to clean hotel rooms as a side job, once he found a shit on the night stand with a slice of cheese on top.
Another time, he went into a room to clean and this woman was lying on the bed naked, he apologized and started to leave. She offered him 50 euros to spit on her while she masturbated.

He spat on her.

Old couple checked out and left a huge box of s^x toys. Not that bad right?

We keep items for 90 days, hotel gets first dibs after that (say it’s an iPad that would be good for something) then whoever found it gets second dibs, then GM, then it’s whoever wants it.

6. Everyone needs a good story to tell.

Not a bad thing, but a good thing. My friend who works in a hotel in Denver said that Warren G left his shoes. I asked what size. She said 12. I said “Thats my size.”

So after the mandatory 30 days or whatever, she mailed me his Adidas shell toes. Whenever I wear them I regulate so hard.

One time a d**do was left in a room at the hotel I work at. Not a big deal, it happens. Nobody claimed it, so the housekeepers wrapped it up and gave it to one of the older ladies who worked in laundry as a gag gift.

The only thing is, she thought it was a legitimate gift and was about to take it home until they explained it was a joke.

There were no kids in the room (as far as we know). It was just one dude in his mid 30s. There were 2 cans of monster energy drink beside it and $180 dollars left in tips under the pillow.

No idea what was going on.

3. Toilet training is a nightmare.

Worked at an upscale ski resort. One family let their toilet-training kid pee behind the toilet and under the sink throughout their whole visit, then put our white towels on top of it to “help clean up the mess.”

There was an older woman who checked in my second week of being there, she definitely should not have been independent. She lived in town and booked a room for a week. She said that she was getting her house renovated because it was infested with “fibreglass”. She was probably in her 70’s or was just not upkeeping herself for a person in her 60’s. She would walk around with one of those surgical masks and wearing yellow rubber gloves. As the week went on she started to wear bandages on her arms (we thinks she was scratching herself, i bet if we asked it would have been because of the fibreglass).

She shouldnt have been able to drive but she kept going to and from her house to get more things, basically was moving in. Our hotel was on a main road and she would just back up into it without looking, it was a miracle she never got into an accident.

But other than that she would spend most of her time in the room, and occasionally would walk to the office (where the manager would sit, this would be me or one of my other coworkers) and just spout crazy stories about fibreglass and how it was everywhere and all over her room. Once the week was up she extended her stay another 5 days because (her house wasnt ready yet).

She repeatedly declined maid service so we could never really get a glance of the condition of the room, yet she would keep complaining that her airconditioning had “fibreglass all over it”, and one of the days she came to the door complaining that the room was infested with spiders and she showed a tissue that she said had “spiders in it” but there was nothing. Like real sad stuff.

Unfortunately since we didnt really have any real way of helping her, my boss advised me to tell her that we are booked solid for the rest of the summer/etc so she couldnt extend her stay any longer, so we waited out those last few days dealing with her complaining and occasionally catching glances at the room as the maids brought her towels and such.

From what we saw there were pillows everywhere, a big bag of like perfumes, pills, etc sprawled out on the dressor (like sooo many random things), etc. She was seen a few times carrying large garbage bags into the room we werent sure what was in them. Just imagine a room that a mentally ill person had been staying in.

She also had a few weird interactions with guests that made them complain, so we really could not wait until she was gone.

But this is the freakiest part where we get to the answer to what we found after a guest’s stay:

IT WAS SPOTLESS. On her last night (we think she climbed out the window (first floor) and put stuff in her car and left (stealing the key too but thats common enough we just replace them). We went back and looked on camera and she was not on camera at all, the night manager did not see her leave (if you leave the regular way you have to be seen by the manager, the office is in the front and its a small hotel). Only way she coulda done it was through the window.

Every worker at the hotel was so curious to see what the room was like after she was gone, it was insane, clean, nothing broken except the airconditioner air filter (she said it had fibreglass all in it), but other than that not much else. We still had a third party clean the room but it was freakin weird man.

My boss said she drove by the address and it was a beautiful house must be a couple mil minimum, and there was like a metal trailer in the driveway (we think she started living in that after the hotel). Sad, and just so, so bizzare. I really hope she got some help or something. There really wasnt much we/i specifically could do, so we had to just move on.

Tldr: Mentally ill woman stayed because her house had “fibreglass all over”, she was increasingly weird and started to freak out other guests as time went on and then left like a ninja, room pretty much good as new. Real sad situation tho :/

1. How could you forget that?

I had an elderly couple check in one afternoon. A couple hours go by and the husband comes up saying the wife is sick and they need to leave immediately. Given the circumstances, we figured it would be a quick clean so we refunded the money and downed the room for the night.

The next morning we tell one of our maids to hit it first since we knew it was empty.

The maid came back refusing to clean the room because there was s*%t all over the bathroom. I didn’t really believe her because she tended to be lazy. So I decided to check it out myself. She wasn’t lying. There was s%*t EVERYWHERE.

I ended up having to clean it. I went through 3 bottles of our strongest cleaner plus an entire garbage bag of cleaning rags which were immediately trashed. We had to down the room another 5 nights with the use of 5 bottles of air freshener and open windows.

Y’all. I know I’ll probably stay in a hotel again at some point, but right now if feels impossible.

If you’ve worked in a hotel, share your horror stories down in the comments!