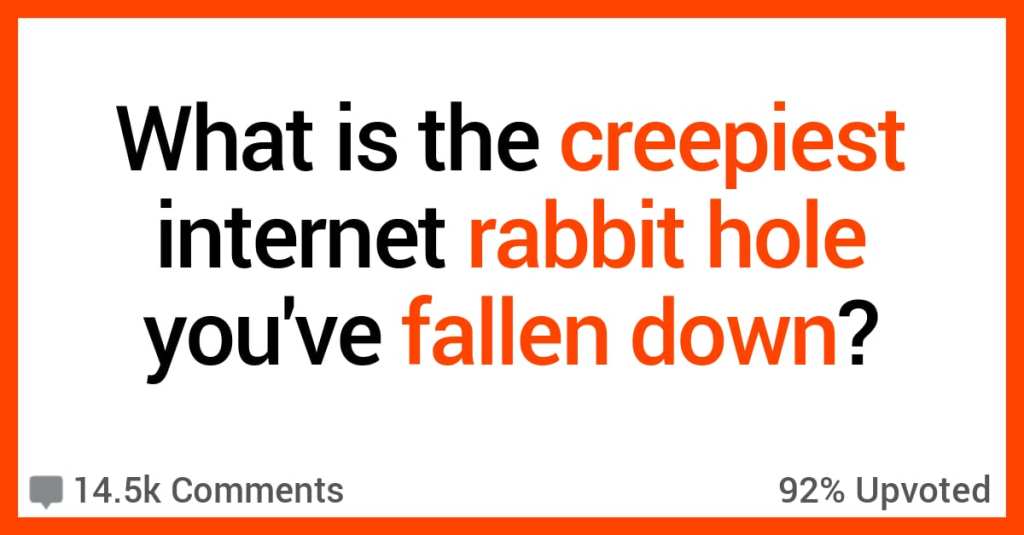 The thing about internet rabbit holes is that you never realize how deep you’ve fallen until you’ve been there awhile, it’s pretty dark, and you know for a fact that it’s too late to easily climb out.

Which is to say, much like Alice, we sometimes have regrets after we’ve followed our curiosity into the darkness – and if you don’t want it to happen to you (again), take the advice of these 14 people and avoid tumbling down these particular holes.

I did a bit of research about school shootings around the world, from Columbine to the most recent one in Mexico at the time.

It was terrifying to read the survivor’s testimonies, I just imagined what would I do if that happened in my school, and ended up crying thinking about my little brothers’ fate in those circumstances. Also, the statistical analysis and studies about the topic are unnerving, since they seem to be more frequent globally every year.

And I hated getting to know about those groups that praise shooters. I would prefer if I didn’t know those exist, it’s frustrating

Because someone asked what the creepiest, most disturbing internet rabbit hole was…

The public suicide of R. Budd Dwyer. I was listening to “Get Your Gunn” by Marylin Manson and found out that it included an audio sample of that moment. I was curious and found a video of him (Dwyer) shooting himself in the mouth with a pistol.

I never knew how much blood can come out of someone’s nose. I didn’t know how to react. And I just….. Laughed. It wasn’t funny at all. It was disturbing. I don’t know why I laughed.

I read about the Japanese concentration camps being especially horrible on Reddit and that was extremely depressing and fucked up but I couldn’t bring myself to stop reading.

Yeah, I fell down the Unit 731 rabbit hole for a while back in 2018. I think I felt weird for a full week afterwards. One thing that stuck with me was reading an interview with a surviving scientist who when asked if he felt guilty, he responded: “No. We did nothing wrong. This was war, and in war, you have to win.”

10. I think this is why people like murder shows.

Uh, this isn’t really that great of an answer as it’s the first thing that comes to mind, but I watched a lot of To Catch a Predator footage early in COVID. Those people are disgusting, and it’s so weird to see some plain-ass dude be otherwise totally normal seeming, but have disgusting desires, and then turn into a lying machine when they get caught.

That moment when someone realizes they are exposed, millions of people are going to know, and they are also going to lose their career/job, family, friends, etc… is just a very complex, interesting and gross human reaction to see.

Ever hear of a guy named John Rabe? He’s known as the Oskar Schindler of China, during the Rape of Nanking he organized what was known as the International Safety Zone, which was a refuge where hundreds of thousands of Chinese nationals were able to find safety during the massacres. Today you can find statues of him in the city.

So what was this westerner doing in Nanking in 1937? Running the cities Nazi party. That’s right, the Empire of Japan committed acts so atrocious that an actual Nazi, with the swastika armband and all, stepped in to do what he could to stop them.

Damn, I wish I remember his name. Years ago I watched a video on YouTube of Elvis’ last phone call which was recorded. In the comments there was this guy who had claimed to know Elvis personally and who went on about how he was in his final days. I grew very suspicious, I clicked his YouTube channel and found more comments on other dead celebrity videos of him claiming to be a family friend. I searched this guy’s name and found his weird-a** fucking website.

It was the most bizarre sh%t I’ve ever seen. It was full of long posts about how this guy was a lead designer and architect in some important buildings worldwide. It also chronicled all of his celebrity ‘friends’. Guy was definitely schizophrenic, I assume. Finding his website was just so odd, it’s like looking into a portal into his mind. Since then I’ve become very interested in schizophrenia and I’ve happened to stumble upon others who seem to have it.

This one guy on Linkedin is a writer, he goes on these rambles on his LinkedIn, YouTube, Twitter about a girl who was killed. But his sentences are all circular, if that makes sense. Almost like talking with someone with dementia who keep repeating the same thing over and over. Except this guy has been doing the same thing for years.

Just lost in a possible fairytale. The mind is f*cked.

7. Vegans are gonna be big mad.

Plants can exhibit Pavlov’s behavior meaning they remember and can be trained, even though they have nothing that we can describe as a brain or a neural network.

6. There are a lot of crazies out there.

This guy once commented on my girlfriends picture of her and her friends on instagram saying “You bitches will all burn in hell praise God” or something like that. He had his name listed, but no photos or anything. I screenshotted it and shared it with some friends asking if they knew who the guy was. One of my buddies said he use to ride with him to middle school and that he would duck under the window so people outside the car couldn’t watch him.

I looked him up on facebook and found multiple profiles, all with dozens of bizarre selfies, one having a link to his youtube channel, which had tons of hour long videos. All of them were just total nonsensical ramblings about being perfect, God, virgins, and biology.

There’s something intriguing and disturbing about finding an online representation of someone’s mental illness. It’s public, yet a very private look into their deterioration. It’s like finding an untreated schizophrenics notebook full of ramblings.

I was a lurker in a car forum for many years, this was probably 8 or so years ago. One time someone posted a thread that linked to an insurance (auto) website that resold accident cars to reclaim money.

There was a whole category of cars labeled “biohazard,” and these are the cars that end up with body fluids in them – giant shits from being in an accident, drive-by shootings with blood everywhere, even suicide cars with brains blasted on the roof. These auto auctions don’t wanna clean that mess up so they will sell the cars cheap.

Some people in the forum even found news articles that corresponded with the murder/accident/etc in a particular car. It was incredibly creepy. But I admittedly spent hours and hours sometimes looking through these disgusting, tragic cars.

The Reddit AMA about the guy who had s^x with his mom throughout his teens.

3. This is your reminder to be careful out there.

I once found a fet**h forum for people who collect STDs and deliberately infect others as it turns them on.

Full on discussions about which hookers to bare back to get the complete set…. really freaked me out.

I can’t even remember how I found it, I backed away quickly and never looked back.

2. We all love a good mystery.

Might be between the disappearance of that Malaysia airlines flight a couple years ago.

Its route was tracked into the Indian Ocean and then lost, there’s only speculations as to what happened on board.

TempleOS is a trip, worth the read

The guy behind it was pretty genuinely insane, literally and figuratively, he used his home brew os to talk to god, and believed he was married to a youtuber that didn’t talk to him.

I’m guilty of following some threads I shouldn’t have, too.

What’s the one you wish you would have backed away from instead of plunging ahead? Warn us away in the comments!