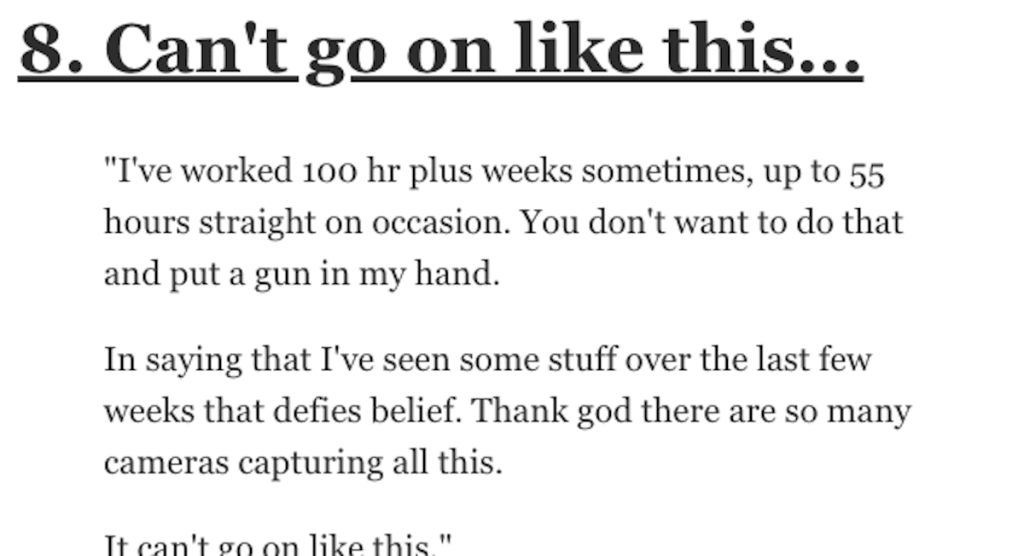 I am NOT one of those people who believes that there are no good cops and that every single one of them is crooked.

I think some are good. Some are bad. Period.

I also think police work is a profession where corruption or misconduct of any kind whatsoever can’t be tolerated. Not even the least bit.

If you don’t know any cops, these answers give some good insight into what the job is like and especially what it’s like right now during all the unrest that’s happening around the country.

Let’s look into some answers from folks on AskReddit.

“Been on the job for a few months now in a liberal beach town.

Beginning was weird because of COVID. Not many radio calls and little proactive enforcement.

Since George Floyd’s murder things were really tense in the beginning. My department has treated the protest as more of a parade and let the protesters exercise their 1st amendment right. A few broken windows here and there but nothing big.

A lot of talk within my department and so far my chief has decided to do away with the carotid restraint. I’m sure more change is coming but hopefully they start to change the hiring process in terms of multiple psych evals and begin to fire people for gross misconduct and/or openly being a bigot.

We’ve been 12 on/12 off for the last week. Due to how tame everything has been we just went back to our normal work schedule.”

Work is fine. Our local communities went out and protested. We were out there to support them.

We didn’t have any rioting or looting. I wish all places could say the same.”

“I work in a smaller police department in NJ. We have a protest this week and the department is walking with the protestors. Surrounding departments have had their protests and all were peaceful. In the US there is a divide in how police are held to certain standards.

There are small to mid size municipal departments with a relatively decent town population. The pay is high and the standards are higher in the job. If you fuck up it’s your ass. We get a lot of mandatory training with more that gets piled on every year. Especially de-escalation and dealing with mentally unstable persons.

I work in this area and am typically looked down upon by the bottom departments I’m about to describe because we “aren’t real cops” and our job is “too easy”.

City Departments and those large sheriff departments in the south are usually the places with the problems. There are A LOT of cops to be accounted for and corruption is usually city wide going all the way to the mayor sometimes.

In a lot of respects, HBO’s The Wire is a very accurate representation of most (not all) cities. The pay is usually not as good and the hours are worse. It’s also a lot easier to get hired into these jobs so the candidate poll is naturally shittier.”

“Nothing has changed for me or my department. No protests or riots that I’m aware of. Only thing abnormal these past two weeks are the amount of suicides and attempted suicides.

Usually that spike in suicides happen around the holidays, but the pandemic is keeping people from getting treatment and they’re left alone with their own thoughts for too long.”

“It’s exhausting and depressing. I can’t go an hour without someone flipping me off or screaming “fuck the police.”

I’m just as upset about the murder of George Floyd and police brutality in general as anyone else. I wanted to be a cop to make a positive difference in my community.

I work for an incredible agency that hires high caliber folks and I’ve never once seen any of my coworkers do their jobs with any malice of hatred toward anyone.

I just want to be happy to go to work again.”

“My brother is a sheriff’s deputy in a mostly rural area. Last week he pulled over a black man for a broken tail light. He said the man seemed nervous so he asked, “is everything ok?” The man said he was afraid.

That he had heard so many stories of violence and thought white officers would hate him. My brother ended up spending half an hour sitting and talking with him.

The hardest part of all of this is that no matter how many bad apples show up or what institutional problems need fixed, the good officers are just trying to take care of people.

The world needs change, but we cant forget the struggles we put on all the men and women still working for our communities.”

“Best friend/previous roommate is a cop.

He has been in Atlanta (north side because Cobb County is new Atlanta) 13 days in a row. It was wild for a couple days with rocks, car fires, and piss bottles, but mostly calmed to normal protests now.”

“I’ve worked 100 hr plus weeks sometimes, up to 55 hours straight on occasion. You don’t want to do that and put a gun in my hand.

In saying that I’ve seen some stuff over the last few weeks that defies belief. Thank god there are so many cameras capturing all this.

“UK Police here – busy! Lots of ‘pop-up’ BLM protests mixed in with the concerns with social distancing and coronavirus.

Mainly I’m for the protestors – but some are not helping themselves with irresponsible behaviour ref deliberately not distancing themselves and wanton criminality when it’s not needed.

Really like the fact at lot of protestors ‘police’ their peers, but as with all protests you have the ‘rent-a-mob’ who are only there to cause trouble.

Looks like it will be a busy week ahead too unless PC Rain shows up.”

Thankfully I’m in a city that has a good relationship with the community and our department has been standing in solidarity with protesters.

A lot of officers are re-considering their career choice now though due to threat of targeting.”

“Recently just got a job at a new dept near Chicago (cause I wanted to for the pay, not cause I was fired or anything, I felt like that was important to say).

It’s alright. Many depts. changed their work hours for COVID, and my city and the nearby ones all had protests that remained peaceful.

But because of civil unrest elsewhere, the admins all had mobile riot control squads waiting nearby but out of sight, along with almost the whole dept present in soft uniforms (meaning not riot gear but regular duty uniforms). A good way to handle it, IMO.

Otherwise, people are antsy because of the quarantines. Mental health welfare checks are up. But it’s not really wacky out here where I’m at or anything.”

“I work in a somewhat “rural” and tourist driven area. My department has a good reputation and strong community support which is nice. We have had peaceful protests that were attended by local department leaders and no rioting.

I have noticed people being more emboldened for lack of a better word, trying to butt in to legitimate law enforcement business, yelling, videoing and making the situation much more tense than it needs to be and take far longer than it should which not only impacts officers but also the people we interact with who were perfectly fine before an uninvolved person felt the need to escalate the situation for no reason.

The shitty part is the unknown. I am entering my ninth year. I am proud of what I do. I have never had a sustained complaint of any type, never had an excessive force complaint, I am not perfect because I am human but everything I do at work is above board.

If I wouldn’t bet my job that the violation I saw occurred or the person I arrest did the crime then I don’t do it. I’ll catch the next one.

Now I have to worry about some anarchist setting my house on fire with my kids inside because my patrol car is parked there? That’s bullshit and it has already happened to an officer in Jacksonville, FL this week when his patrol car was torched right in front of his home while his family was sleeping inside

This movement is going to have the opposite effect that it claims to want. Good cops are going to decide it isn’t worth it anymore and the bad, corrupt and totally stupid ones will be all that’s left to hire.

I teach at the local police academy and it was very hard to get qualified candidates before this started. The standards have been continually lowered since I started and I expect it to continue.”

“From a relative who’s husband works for the Secret Service at the White House:

“My husband was on the front lines of the recent White House protest. It was a long night for me, but it was a much, much longer night for many others. We see the burning buildings, the broken glass. We hear about the tear gas, and barricades. What we don’t hear and see is this 👇.

He told me of a black woman, whose face is frozen in his mind. She stood between him and a swarming group of people who wished death, violence and all other kinds of things upon him. Shouting back at him she said; “I got you!” Shouting to the protestors she said; “This isn’t the way!”

I have no judgement to pass because I can’t understand, but I want people to know that mixed with the sad, terrible, and ugly there is hope, there are bridges.”

“My cousin is in an outer suburb of Minneapolis and he just became a cop. He said Friday night (when the protests and riots were happening) when he worked was the hardest night of his life.

The chief officer said he hadn’t seen anything like this in the past 18 years he served there. A friend of mine is in the army and she said she’s been on active duty this entire time and it’s been super long for her. I witnessed the effects of the riots firsthand and it’s crazy.

I don’t think this city has ever seen something like this in most people’s lifetimes (maybe in the past, but not the current generations).”

Definitely some good insight there.

What are your thoughts on this matter?

Talk to us in the comments: we want to hear from cops and regular citizens.

And keep it civil.

Please and thank you.