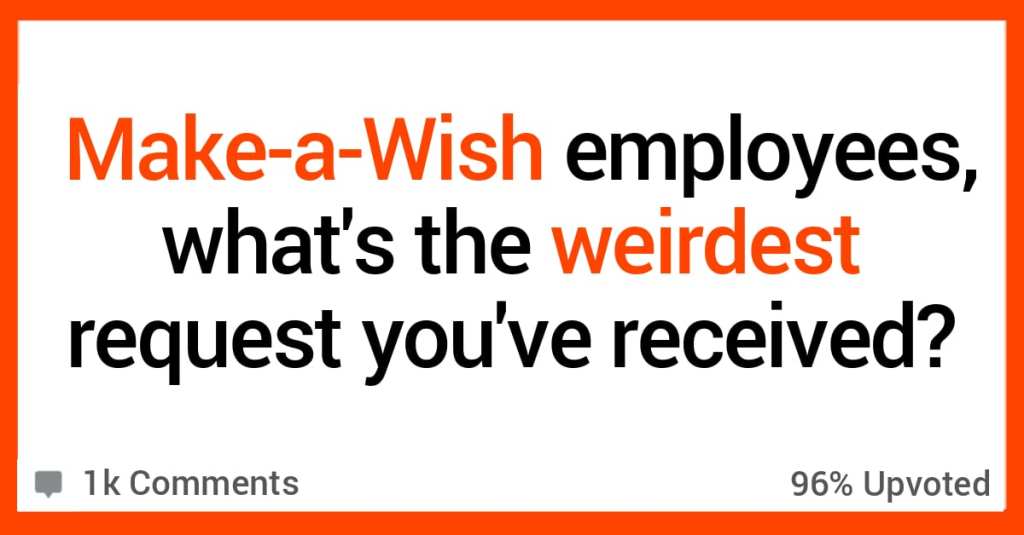 14 Make-A-Wish Wishes That Are a Tad Bit Strange

Working with Make-a-Wish kids has got to be depressing at times. You’re constantly talking to and working with kids who have terminal diseases or who have had a too-rough time in life (and their families), you’re thinking about how to make their time more special, things like that.

The workers are probably very tickled to get the requests that are silly or funny or just plain weird – laughter is the best medicine, after all!

Yeah that’s the annoying thing about MAW. Kids are allowed to request things in very specific detail and MAW will do its best to fulfill it. I just had a kid that gave me an entire parts list for his dream PC build. But they have to make the request.

This kid obviously doesn’t know about the museum so he can’t request it in his wish and we aren’t allowed to make suggestions to him especially younger kids as they’re very impressionable, so it’s all up to MAW what his agenda will be on the trip. I hope they do let him go though.

13. Kids always find a way to lift your spirits.

Not MAW, but I worked at a summer camp for kids with special needs and we would do a closing campfire at the end of the week where every kid got to write a wish on a popsicle stick and we would burn their “wish sticks” so they would come true (in the form of shooting stars… eh it’s a long story)

Former Wish Granter here too. This was really common. But a lot of the times I would come across parents that would ask if their kids wish could be medical supplies, clothes, a wheel chair ramp, etc. In that case we would refer them to another non profit since we had certain policies that restricted us.

The saddest question I ever got by a parent was for her 4 year old daughter who had a rare form of cancer. She asked if they were able to make a wish to where we could fix their a/c. She said it had been broken for a while and that they didn’t have the money to pay for it because of their medical bills and they had only been in the U.S. for about a year and some. Mind you, this was in the middle of winter. It broke my heart.

11. Some of these are super specific.

Not a worker, but I know a kid who’s cancer stricken brother wished to be in a movie. He got to be an extra in National Treasure (where Nicholas cage steals the Declaration of Independence).

He got to be in a scene early in the movie where an envelope is being passed down a row of kids, he was one of those kids. He got to hang out with nic cage a lot and meet the other MAW kids that requested the same thing. That’s the coolest wish I’ve heard so far.

Former Wish Granter here! A big part of the job is helping the child decide on their wish. The final wish has to be feasible of course so you’re there to make sure it isn’t too outlandish, but, in my experience, kids often don’t initially think “big enough.”

It was not uncommon at all for a kid to request something super small like going to Chucky Cheese, and we’d have to build the wish out from there.

Also we had to make sure parents didn’t try to influence the child’s decision, which I saw many times

Sorry kid, we can’t help you with that.

(PS – But somebody eventually did.)

8. I hope they help the kids get what they really want.

I think it’s more like “Hey [daughter/son] you should say you want to go to Italy!”. Because mom and dad want to go on a vacation but can’t afford it.

There was a particular instance where a child was very adamant about a new family car, but when we spoke without Mom there, the child really wanted a Disney trip.

Another request was for a “home makeover” but when asked to speak more about what that would entail, the child just shrugged.

There are worksheets to fill out with the child to help narrow down what they actually want/ would enjoy most!

7. That’s a new (and probably impossible) one.

i once request to have am elder sister.

6. Why are some parents so awful?

By default, the parents always try to help their kid figure out a good wish. But there are plenty who try to sway their kid into something that’s really just for them. A lot of parents just want money or a vacation.

I think its very understandable since having such an ill child is stressful and costs a lot. And there’s not really a program for sending parents on a relaxing trip if they have an ill child.

My son spent 8 years asking Santa for a little sister.

We remind him of this when his little sister is being annoying!

4. I guess as long as everyone was happy in the end.

I think that I technically count as a parental wish-influencer. When my son was trying to decide on his wish, he was torn between asking for the Nickelodeon cruise or going on a ghost hunt with the guys from Ghost Hunters.

Not gonna lie: when the choice is between a week on the ocean exploring Mexico and a night in a dark, abandoned, warehouse? Suddenly the parents get opinionated, lol.

In the end, he chose the cruise entirely on his own. It was an amazing experience: he got slimed, swam with dolphins, met Tom Kinney, and ran amok for a solid week. MAW created some of our happiest memories during what was an overwhelming, terrifying time. Now that my kid is back on dialysis and having to start over and work towards a second transplant? I’m so grateful he got to have that experience while he could.

3. Disney does everything well.

As a kid, I went with a bunch of extended family to Disney World. We had a modified pass for my special needs cousin. I am still so impressed by how well we were treated. I can tell that the staff were highly trained in regards to special needs kids.

As an adult, I don’t understand all the hype about Disney and I probably wouldn’t go on a trip there again. I’m just saying that really made our experience so much better.

My friends daughter got granted a wish. She was allowed to send in three, and they would pick which one. They picked number 2 which was a tea party with the Disney princesses, so the family got to go to Disney world. Her #1 pick was to go see a NASCAR race with her dad.

Pretty sure they didn’t give her that one cause they figured there was parental influence, cause what 5 year old girl would want to go to NASCAR. Thing is, it was 100% her idea, and she was still a little bummed at first that they didn’t pick that one.

1. It’s never just what they asked for.

Both my boys got wishes, and one chose DisneyWorld and the other, Disneyland (well, Legoland, but they gave us Disneyland as well).

Disney does MAW right. They are absolutely fantastic. For the DW wish, we stayed on site at the Polynesian. Every evening when we got back to the room, there were gifts for the boys, treats, etc. The MAW passes meant we barely waited in line, mostly just for the current ride to end, and we were on the next. The crew/staff were incredibly accommodating and fun, checking with the kids to make sure they were having fun.

I actually tried to convince the first one to go for something different, meet a celebrity or something, but he wanted to go, so we did, and had a blast. Both times we got to see other sites in the area, and all in all had a really good time.

It was LONG days for the parents, hot, tired, trying to make sure we got to all the sites and rides the kids wanted to see, but they both have very fond memories of those trips, and we still sit back occasionally and look at the pictures.

It wasn’t so much that it was “Disney”, but that it was a really fun park that really made them feel special those days.

These kids have my heart, y’all. Ugh!

If you had or were a Make-a-Wish kid who asked for something other than Disney, tell us what it was in the comments!